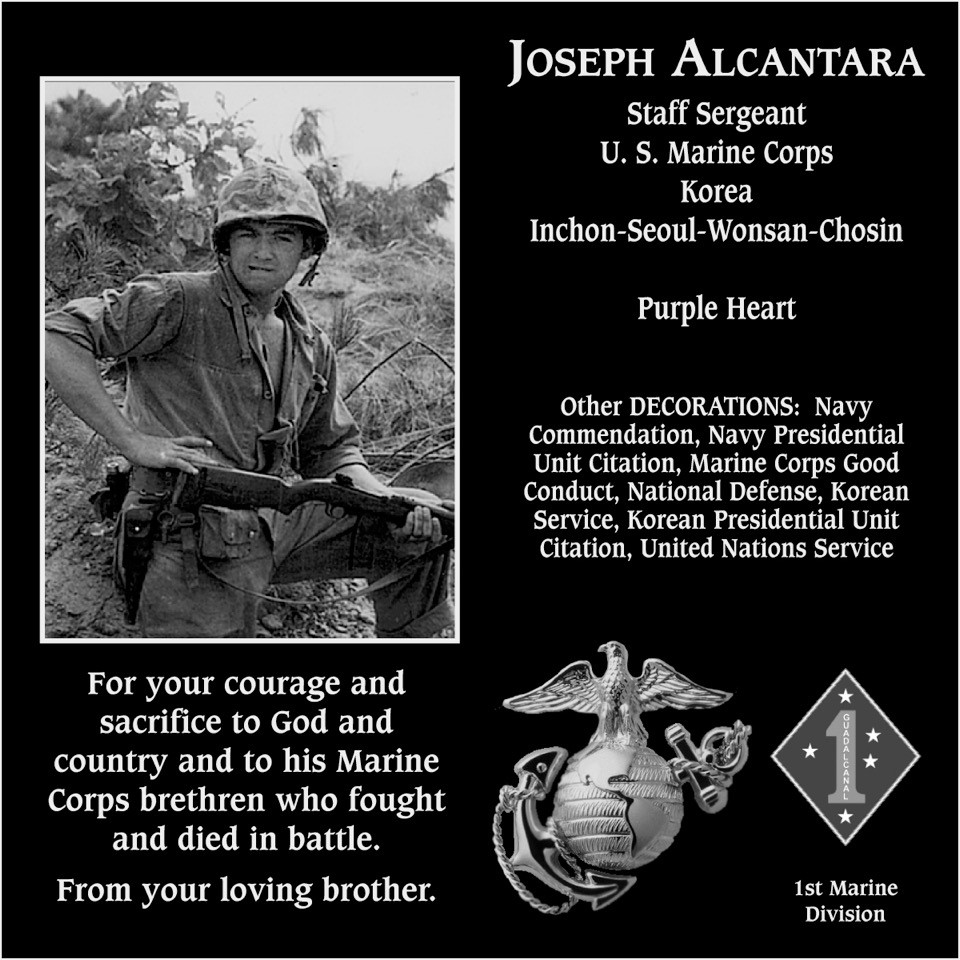 He was born May 6, 1930, in Natrona Heights, where he lived before moving to Arizona in 1994. He also resided in Brackenrige as a young man. A Korean War veteran, he served with the Marine Corps at the Chosin Reservoir in Korea. Discharged a staff sergeant, he was awarded the Purple Heart, Navy Commendation Medal, Good Conduct Medal and numerous other medals and citations. Mr. Alcantara retired in 1992 from Allegheny Ludlum Steel, Brackenridge Works, where he was employed for 28 years. He also worked at PPG Industries, Creighton, East Deer, for several years. A private business owner, he operated a dry cleaning shop and a Hallmark card and gift shop, both in Lower Burrell. A local and national member of the Chosin Few Band of Fraternal Brothers, a Marine organization, he retained his affiliation with the Corps for 54 years. He enjoyed making people laugh and spending time with his family and friends. Survivors include his wife of 26 years, Marilyn J. Lemmon Alcantara; three daughters, Mrs. Vicky (Anthony) Sherman of Rena Lara, Miss., Mrs. Sharon (James) Lucas of Piggott, Ark., and Mrs. Gay (Donald) Kreinbrink of Jackson, Miss.; a stepson, Craig Lombardi of Tarentum; a stepdaughter, Mrs. Candice (Joseph) DeRose of Brackenridge; 12 grandchildren; seven great-grandchildren; and two brothers, Frank (Laura) Alcantara of Glendora, Calif., and Robert Alcantara of San Diego. He was preceded in death by his parents, Frank and Lena Petracco Alcantara. A memorial service with military honors will be this morning in Sun City West. A local memorial service will be in Natrona Heights at a date to be announced. Memorial contributions may be made to Sun Health Hospice Care Services, 12740 N. Plaza del Rio Blvd., Peoria, AZ 85381; or Volunteers for Hospice, 10404 W. Coggins Drive, Suite 110, Sun City, AZ 85375; or a charity of the donor's choice.