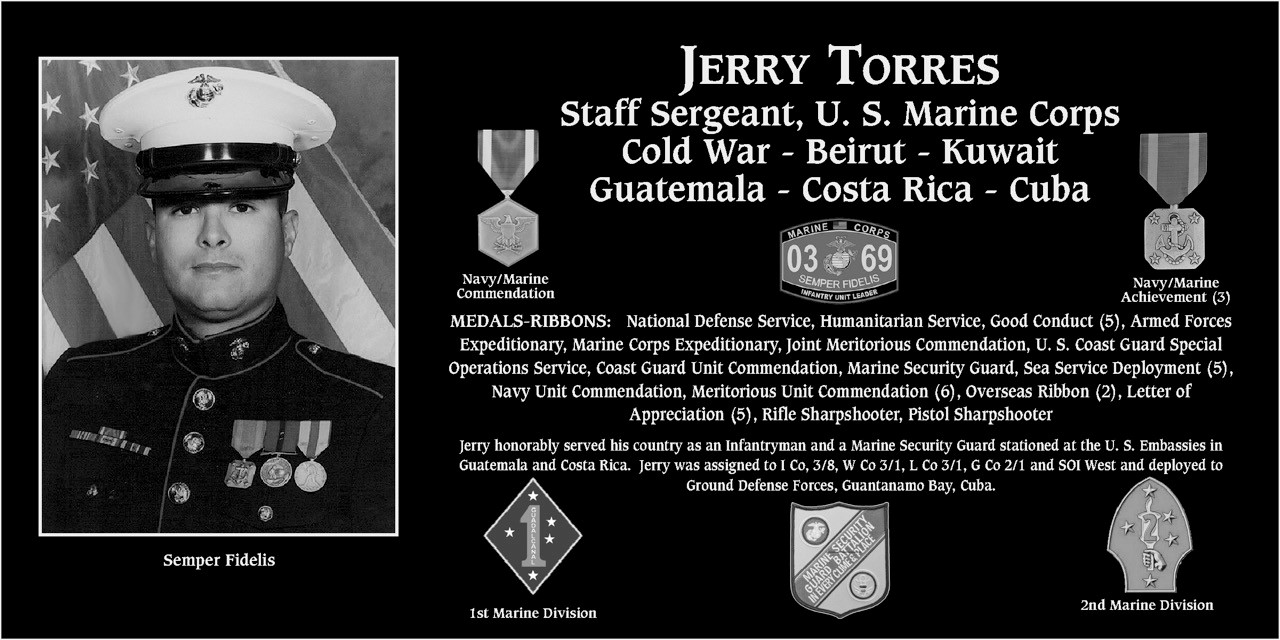 SSgt Torres enlisted in the Marine Corps in January 1979 from New York City. He spent 7 months on the delayed entry program until his departure to MCRD Parris Island in August of 1979. Upon his graduation from MCRD Parris Island, he received orders to report to the Infantry Training School at Camp Lejeune, N.C. in November of 1979.

Upon his graduation from Infantry Training School in December of 1979, PFC Torres received orders to the 2nd Marine Division where he was assigned to 3rd Battalion 8th Marines India Co, 3rd Plt. He subsequently completed three Mediterranean floats, the last one being the most memorable. While on his last Mediterranean float with 3rd Battalion 8th Marines Sgt Torres participated in multinational peace keeping operation in Beirut, Lebanon with the 24th MAU from October 1982 to February 1983.

Upon his arrival at the School of Infantry, SSgt Torres was assigned to Delta Co. where he served as Platoon Commander for 18 months before being reassigned to Tactics/Instructor Section. As an instructor at SOI, SSgt Torres instructed numerous fields of the Infantry profession, to include weapons handling, demolitions, patrol tactics, land navigation, and numerous other Infantry skills.

In June of 1994, SSgt Torres received orders to report to the Marine barracks in Guantanamo Bay, Cuba. Upon his arrival, SSgt Torres was assigned to Rifle Security Company Winward. While stationed at Guantanamo Bay, Ssgt Torres participated in alien migrant operation able manner, and Operation Sea Signal, where several thousands of Cuban and Haitian Refugees where housed at several camps aboard the base. He also participated in the fence line operation to deter Cuban Military aggression.

In June of 1995 Ssgt Torres received orders back to the 1st Marine Division, where he was once again assigned to 3rd Battalion 1st Marines. Upon his arrival, Ssgt Torres was assigned to Lima Co. where he served in a variety of billets from Company Gunny to Plt. Commander. While with Lima Company, SSgt Torres deployed to the Western Pacific and participated in Operation Vigilant Sentinel and Operation Southern Watch while conducting operations with the 11th MEU. Upon the Battalion’s arrival in April of 1997, Ssgt Torres was reassigned to H&S Co. 3/1 to serve as the Battalion’s dependent assistant during deployment. Upon the Battalion’s arrival in December 1998, SSgt Torres was again reassigned back to Lima Co. where he served as 2nd Plt. Sgt.