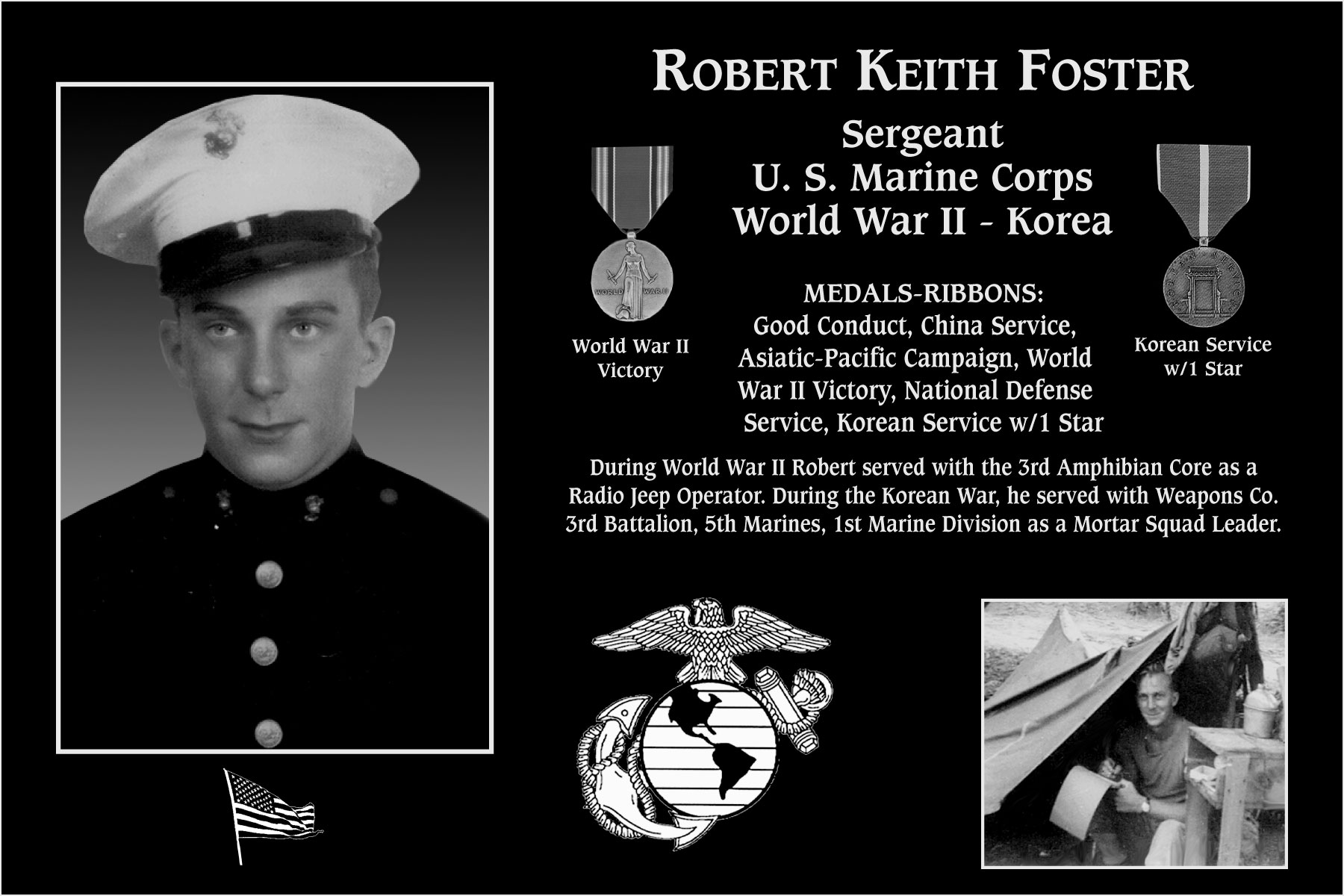 Thank you for being here today. It’s fitting that we are gathering at this place because it had special meaning to Robert. 10 years ago his family honored him with a plaque here. When they brought him to see it, he took great pride; and he was especially tickled that it is located near the plaque of his hero, Ronald Regan.

Robert was born in Des Moines, Iowa in Jan of 1927, to Mary and Keith Foster.

He lived on a farm with his parents, and later his grandparents.

He has said that in addition to learning many lessons from his parents and grandparents, the Boy Scouts taught him a great deal. He was a Junior Assistant Scout Master in the first senior patrol for boys 15 and up. He would have become an Eagle Scout, but instead proudly joined the U.S. Marines at age 17.

He served in World War II in the South Pacific, and in China. He also served in the Korean War.

He loved this country very much. And he was always full of pride at having helped protect it.

After being discharged from the Marines, he went back to school and earned a teaching credential, with the help of his wife and the GI Bill. He and Gracie left Iowa in the early 1950’s and settled in Orange County, California. They raised a daughter and three sons, all of whom were by his side when he passed away on April 21; and who are here today to celebrate his 91 years of life.

His passion was American history. But often in his 30 year teaching career, he was called upon to teach other subjects. He was a good teacher who wanted to help kids learn and also demanded respect from them. He mostly taught junior high until retiring in 1985.

When Robert was a little boy, his Grandma Daisy enrolled him in tap dance lessons with the vision that someday he would dance with Shirley Temple. After

retiring, he re-ignited his passion for dancing, becoming an instructor of Country Western and West Coast Swing. That passion served him well, keeping him active and socially engaged up until the last year of his life.

In the Leisure World Seal Beach community, he made many good friends. He took pride in working to help build a memorial that today recognizes veterans of all the armed forces.

Maybe it was the teacher in him, but Robert loved writing things on 3x5 cards. Here are just a few thoughts he left recorded for his family on some of those cards:  If I get to have a memorial, I would like it to express my gratitude for an interesting journey that I believe will be continued after my physical body is scattered.

 We are like raw material when we are born. Living day-to-day makes us what we are, and should never be complete until we die. Then, hopefully something we have done to make the world better lives on.

 It‘s been a great journey. I have a wonderful family and friends, and I loved them all; every one.

 I can pat myself on the back because all of my kids are middle aged and up, and after the many phases of ups and downs, and experiments with the temptations of life, they all have integrity. And I can honestly say my four kids are all good people.

 Like the Boy Scout motto says, “be Prepared.”