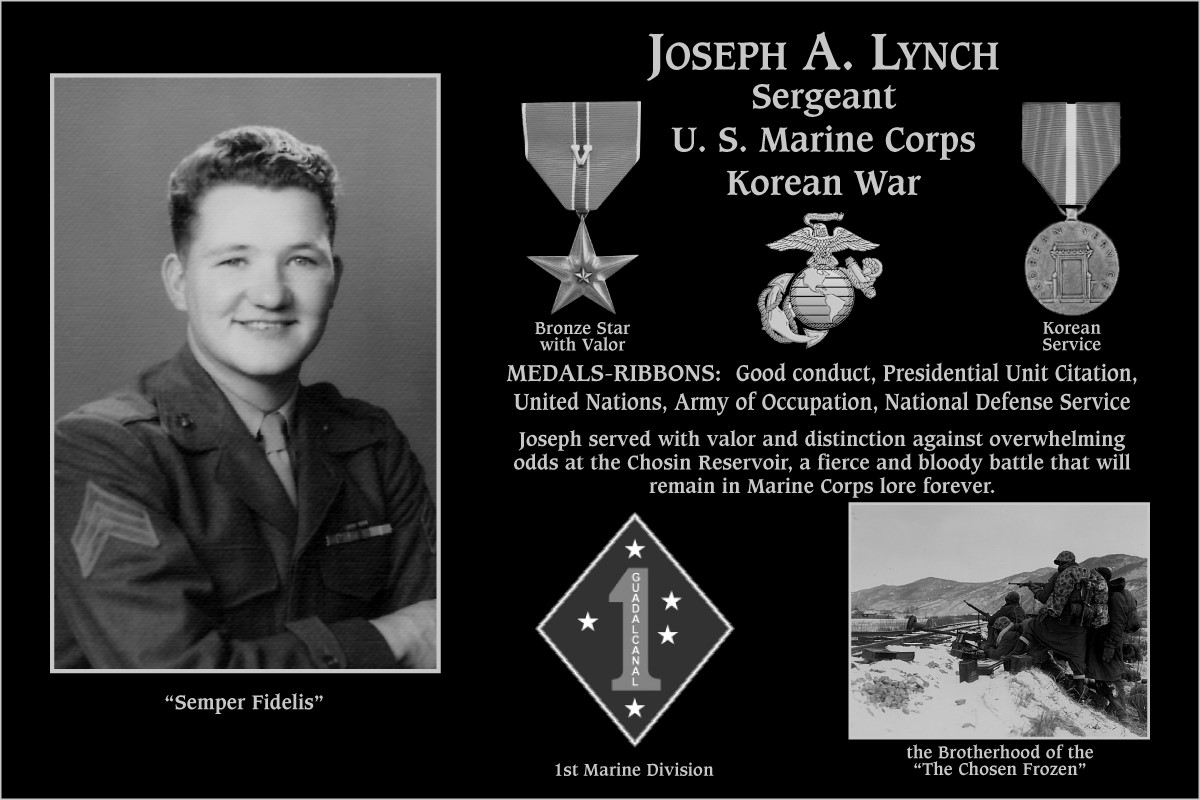 Joseph A. Lynch had never set out to become a hero. But, as a young boy in Brooklyn, NY, when he watched his older brothers John, Wally, and Jimmy go off to war in Europe and the Pacific, it was his strong desire to courageously fight alongside them. At the age of eighty-three he said, “That was just a foolish child’s dream.” He hadn’t realized at that impressionable age that, just over time’s horizon, there was another war that would one day afford him that opportunity—albeit without his brothers beside him.

By the time he had turned sixteen, Joe had grown weary of a difficult home life. So he doctored the birth certificate of his older sister, Eileen, and joined the Marine Corps. Truth be told, it wasn’t the opportunity to be one of the few, or even the proud, that enticed this too young for the military man to join the Marines. It was, rather the ease by which he’d been able to fool them about his age (he hadn’t had that luck with the Navy). But once he’d reached Parris Island, slipped into the fresh uniform, and gently tugged the issued utility cover down over his head, he felt he had found his new home. Despite even a broken nose from a disgruntled—and possibly inebriated—drill instructor, Joe took to the disciplined structure of boot camp and the Marine Corps. That is to say, he loved being a Marine from day one.

Although Joe’s war wouldn’t come for a couple years, it arrived plenty soon enough. He stepped off the U.S.S. Henrico in the Port of Pusan, Korea on his nineteenth birthday. Within days, artillery-training exercises in the hills at Camp Pendleton had been replaced by the relentless pummeling of hill and mountainsides, as well as their occupants, in the perimeter that’d been set up to defend that last-standing city in the South. And the occupants of those ever-present hills did their best to pummel back. He, along with the rest of the 1st Battalion, 11th Marines, awakened quickly to the reality of war in which a lack of water, rampant heat prostration, and bedeviling, live, enemy ammunition competed for the chance to remove Marines from the fight. Each method found its mark with alarming frequency.

Then, only months later, the scorching heat that saw Joe’s Able Battery firing 105 mm Howitzers while dressed only in boots, helmet, and underwear, gave way to Siberian winds and temperatures that reached subhuman lows. It was at this time, in the ominous and treacherous mountains of the North, during the fighting withdrawal from the “Red Trap” at the Chosin Reservoir, on a December night during which the temperature dropped to forty degrees below zero, that Joe, with fear gripping his heart, disregarded his own safety in order to save the lives of others.

The ambush had come with lightening ferocity and diminished a thirteen-man patrol to only two. Everyone else had been hit by machine-gun fire and was either dead or dying. Joe understood that if the bullet wounds didn’t kill the still suffering, the cruel weather conditions would. With only one man to lead, Cpl. Lynch managed to fight off and incapacitate the attackers while simultaneously keeping the surviving wounded as warm as possible and, more to the point, alive. For his quick thinking, decisive action, and courage under fire, Joe was awarded the Bronze Star with the combat “V” for valor adornment. He would also be promoted to sergeant.

Just as when he’d received that broken nose early on at boot camp, this event seemed to make everything else that came after it a little less harrowing. Joe, and the other surviving members of the 11th Marines, would reach safety only three days later, and would forever be remembered as one of The Chosin Few. Many of his friends would not.

With the military behind him, Joe would continue to demonstrate heroism in the face of personal danger and receive more decorations for valor, during his fourteen years on the New York City Police Department. This included the Catherine O’Dwyer Medal For Lifesaving, the city’s Medal of Honor.

Joe is the subject of an award-winning book published in 2018, titled The Bed I Made: A journey of fulfilled hope, fifty years in the making. The book, through Joe’s very personal and revealing story, illustrates the devastating hidden effects of war on our veterans and their families, as well as the prospect for hope in their lives. It is an example of the power of the human spirit and what can be achieved when we tap into it. The telling of his story for the sake of others is just one more example of Joe’s enduring courage.

While he never set out to be a hero—and he would deny that title—those who know Joe Lynch surely know a hero. So today, atop this majestic mountain, with its commanding views of San Diego County—Joe’s home—we elevate the memory of his service to country, as well as his sacrifices for mankind. At the very least, among the many treasured memories here, the Korean War, in Joe’s name, will go unforgotten.

This beautiful plaque that we dedicate today was a gift from Joe’s grandsons, brothers Joseph, Michael, Robert, and Jonathan Ferraro, and their families.