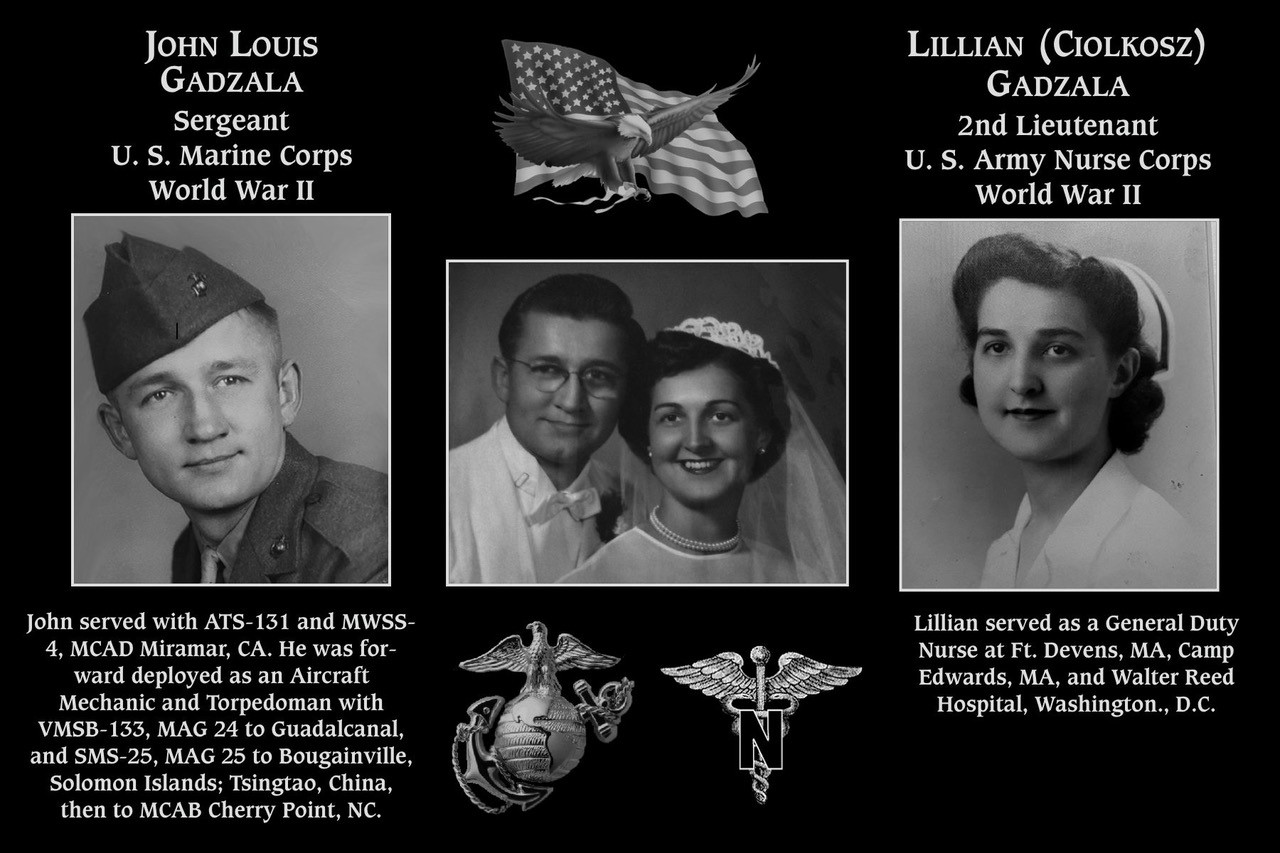 John Louis Gadzala was born in Chicago, IL, on July 14, 1917, to Polish immigrant parents Louis Gadzala and Mary Kaput (kah-poot). John grew up fluent in Polish and English. In high school, he was very athletic. He earned varsity letters in basketball, swimming, wrestling, baseball and gymnastics from Thomas Kelly High School Class of ‘35. Learning to play the violin he was nicknamed, “The Professor” and led an orchestra that played for local weddings and other events. He remained active in golf, bowling and swimming throughout his life. After high school he attended Allied School of Mechanical Trades learning tool and die-making. He worked for McCarthy Grey Iron Foundry Company and Crane Company, skilled in machining valve parts, jigs and fixtures.

John enlisted in the United States Marine Corps in October 1943, attending Great Lakes Torpedo School, and ATS-131 at MCAD Miramar. October 1944 he left San Diego for Guadalcanal, Solomon Islands. He served with SMS-25, MAG-25 as a torpedoman and aircraft mechanic at Piva Field on Bougainville Island, moving to Tienstsin and Tsingtao, China after the surrender in August 1945. In China, MAG-25 supported food drops to missionaries isolated by the communists, and evacuation of American and Allied civilians from the Weihsien internment camp. He left MAG-25 and China in February 1946. Honorably discharged from the US Marine Corps in May 1946, he was authorized to wear the American Campaign Medal, World War II Victory Medal, Presidential Unit Citation, and the Asiatic-Pacific Ribbon with operation and engagement star for participation in the consolidation of the Northern Solomons.

In 1949, as a result of his faithful service, John utilized his GI Bill education benefits to attend Illinois Institute of Technology and earned a BS in Mechanical Engineering (with Management Option). After graduation, he worked at International Harvester Company, Foote Bros. Gear and Machine Company, and Ford Motor Company, Aircraft Engine Division.

In 1958, he was hired by The Boeing Company. He worked as a senior tool engineer, and lead engineer on the Bomarc and Dyna-Soar Missile programs. He supervised production planning, and tool design for cryogenic tanks, and rocket cases. In 1959, he wrote and published Dimensional Control in Precision Manufacturing.

As the Space Race heated up in the 1960’s, John’s job with Boeing moved the family to The NASA Michuod Assembly Facility in East New Orleans, LA. Boeing was supporting NASA’s Apollo Space Program. There he was the supervisor of manufacturing engineering where he worked with the team of engineers and scientists who designed, engineered and manufactured the Saturn C5 booster rockets that carried our Apollo astronauts to the moon.

From 1966 to 1976, John was transferred to the Boeing Vertol Division in Philadelphia, PA, as supervisor of manufacturing R & D, in support of manufacturing processes for the CH-46 Sea Knight and CH-47 Chinook helicopters. His work on the aircraft enhanced the flight integrity of the rotor blades and helped the blades withstand in-

flight damage. Ironically, John’s son Tom would later pilot the CH-46 Sea Knight helicopter that John worked on during his time at Boeing.

Later, he supervised manufacture of light rail vehicles that were used in major US cities and various countries overseas.

John was a fun-loving man who was the life of the party. He was an involved father who made his family a priority. He was very supportive of his children’s educational and extra-curricular pursuits. Through the lives of his children and grandchildren, he left a legacy of patriotism, hard work and excellence.