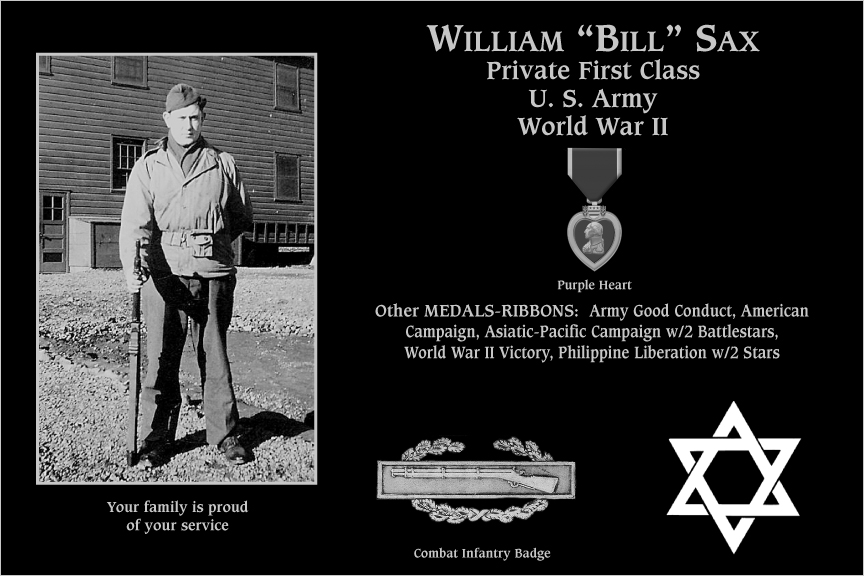 [I wrote this biography in memory of my father who was scheduled to go on the Honor Flight, leaving from Moline, IL to Washington, DC to visit the WWII Memorial. Dad passed away the week before the flight but they took his flag and presented it to his family when the flight returned. Caren L Sax]

William H. Sax, better known as Bill, was drafted from his hometown of Moline, IL on Oct. 15, 1942 (less than two months before his 21st birthday) and went from St. Louis, Missouri to Camp Adair, Oregon, where he was placed in a heavy weapons company, Company D. He spent his first Thanksgiving and holiday season away from home. Both his brothers were also drafted; the older one into the Air Corps and his younger brother into Anti-Aircraft Artillery. After training in Oregon and California, Bill went to Hawaii and then to several islands in the Pacific. He was on Leyte in the Philippines for about 10 days when General MacArthur made his famous return there.

His regiment, the 381st, ended up in Okinawa on April 1, 1945, in the last battle of WW II. Their unit was shelled and several of the soldiers were hit by shrapnel. Bill got at least five pieces in his hand and shoulder and when the medic asked where else he got hit, Bill didn’t realize that his helmet had a hole in it – the shrapnel went through the helmet and just barely got through the liner – Bill’s helmet saved his life! He was taken to the hospital in Guam, then to Hawaii, then back to the States. He received the Purple Heart, among other medals. He got his honorable discharge just before Thanksgiving 1945, almost 3 years after being drafted. He walked back into the family poultry business at 8 am and by 9 am he was dressing turkeys for Thanksgiving!

Bill married Arlene Schaider a few years later and they raised two children. They celebrated their 62nd anniversary this past January (2010). Bill’s family was most important to him. He loved to visit his son in Arizona and his daughter and son-in-law in California; in fact, traveling to see family and friends took priority over traveling to see sights. His other favorite trips were to Army reunions and Studebaker meets. Bill was one of the founding members of the local Studebaker club in the Quad-City area (IL and IA) and owned many of the classic cars over the years. He would have been so pleased to see the line-up of Studebakers that joined the procession to the National Cemetery on the Rock Island Arsenal, where he was laid to rest on Wed., April 21, 2010. This honor was surpassed only by the ceremony at the Arsenal, where he was given a 21-gun salute, followed by the playing of taps. The flag that draped his coffin was then folded and presented to his family, and then brought to Washington, DC today for this memorial.

Few people who knew Bill Sax had any idea of his role in the war; he only shared his story with those who could truly understand his experiences. Bill lived a good life – making friends wherever he went. His generosity of spirit and good humor will be long remembered by all who knew him. Although he wasn’t able to go on the Honor Flight today, he is here in spirit and he would be honored and humbled by this memorial.