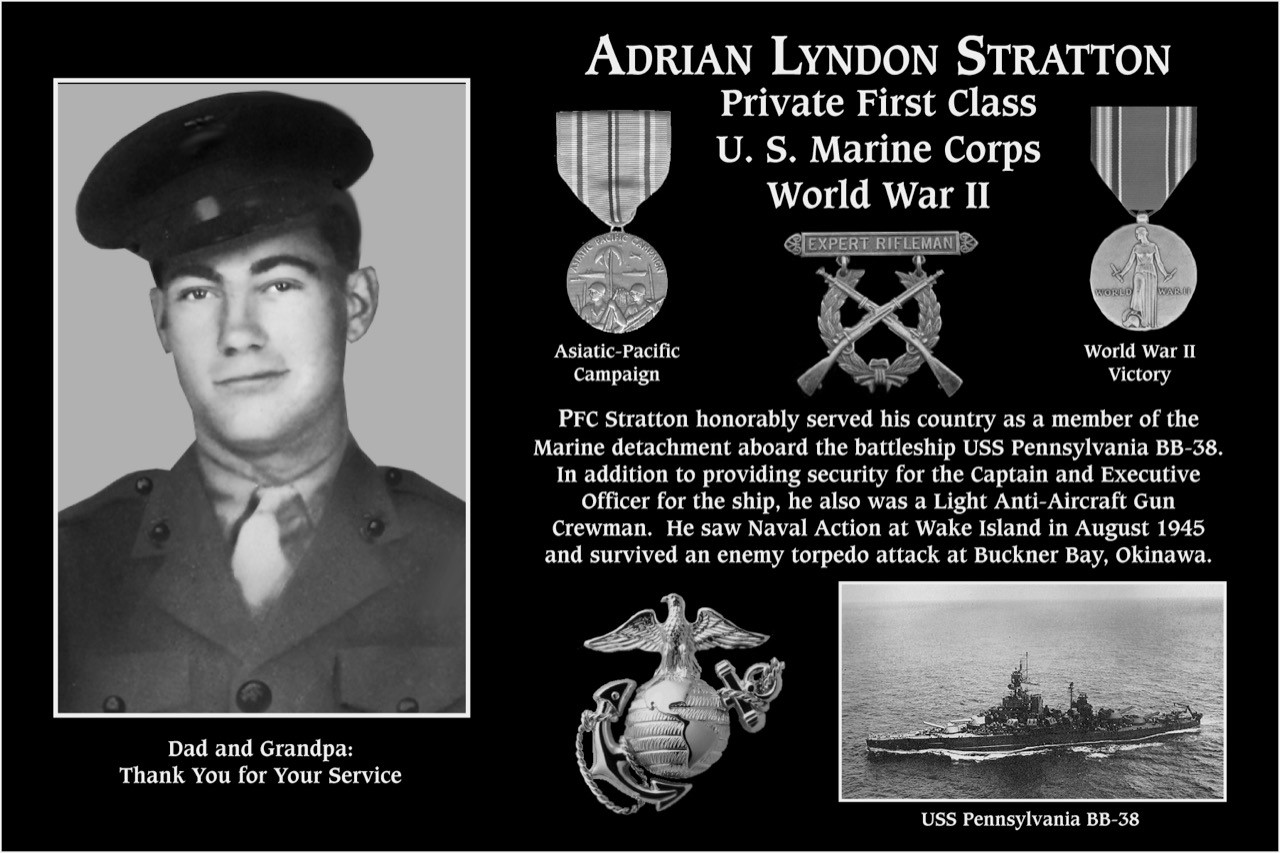 Born in 1926 in Seminole, Oklahoma as Adrian Lyndon Stratton. Al was raised on a 40-acre cotton farm that did not have electricity until after the war. He took woodshop classes in high school that he really excelled at. In 1944 he graduated high school and enlisted in the US Marine Corps to join the war. He was then sent to boot camp at Camp Lejeune where he earned his Expert Rifleman badge. Upon completion of boot camp, he was assigned to the Battleship USS Pennsylvania with the 11th Division Marine Detachment.

Al served as security for the Captain and Executive Officer of the ship and also had duties as a Light Anti-aircraft Gun Crewman during battle stations. He saw naval action at Wake Island on 1 August 1945 and an enemy aerial attack at Buckner Bay, Okinawa 12 August where the Pennsylvania suffered a torpedo hit on the starboard quarter. Three days later Japan announced their surrender, signaling the end of the war.

Al spent his last few months in the Corps as a truck driver at Camp Pendleton and was honorably discharged in August 1946.

In 1947, with his desire to pursue carpentry, he accepted employment in the Territory of Alaska as a foreman. Enjoying hunting and fishing in “The Last Frontier” he finally settled down marrying Norma in 1961 in Anchorage, Alaska. In 1964 Alaska experienced a magnitude 9.2 Earthquake lasting 4 ½ minutes. The next few years after the quake the construction industry in Alaska was greatly impacted as the influx of new residence to the State severely dropped due to fears of another quake. Al closed his lumber yard and took his wife and two sons and headed south to California to find work.

After a year living near Sacramento they ended up in San Diego where he worked as a general construction superintendent and later got his general contractor’s license and real-estate license. He retired from the industry in the early 90’s. He lost his beloved wife of cancer in 2009 after 48 years of marriage.

Al has three grandchildren and now lives with his oldest son’s family in San Diego.