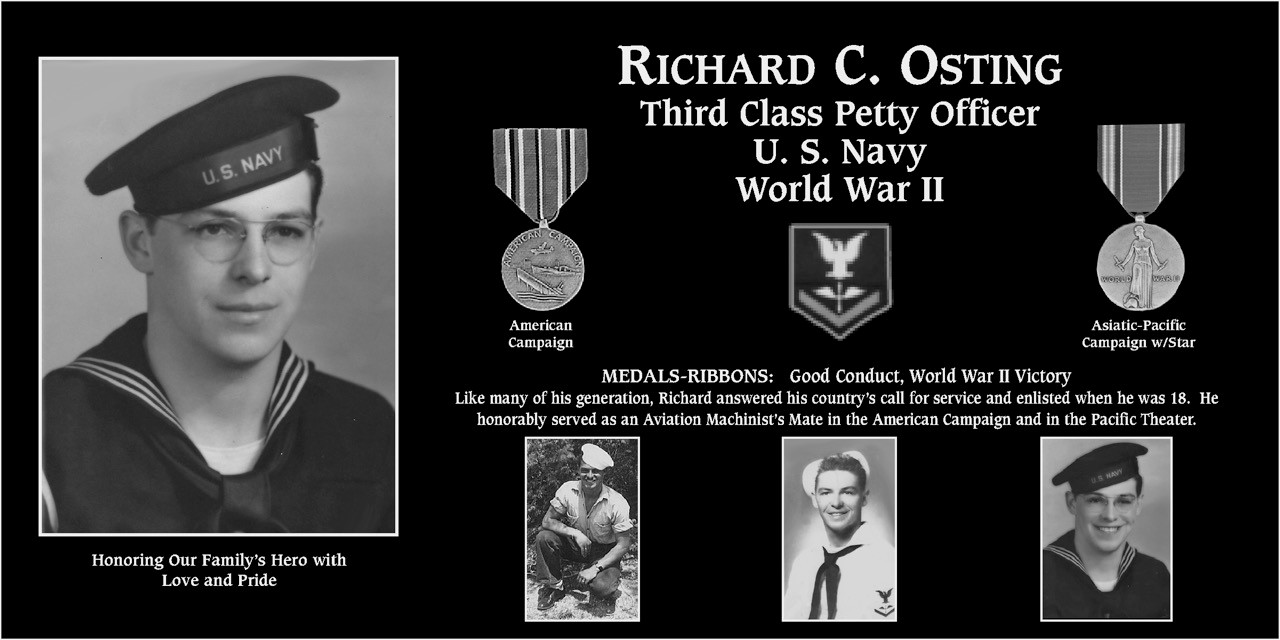 Richard Osting, served and trained in aeronautical engineering in the

US NAVY as a Third Class Officer, an aviation mechanic, during WWII in the Asiatic-Pacific. He earned a WWII Victory Medal and a Good Conduct Medal. Pre-war he served and trained at the Naval bases in Glenview-Illinois, Ottumwa-Iowa, San Diego-CA and Barbers Point-Hawaii.

Richard Clarence Osting was born in DeMotte, Indiana on June 26, 1924 to his beautiful mother, Marie Myers and his hard working father, Herman Osting, both born in Holland. He served bravely and loyally in WWII in Aviation and went on to work with Anheuser-Busch for 35 years. Pursuing his love of aviation mixed with his adventurous and curios spirit, he flew his own plane, a Luscombe 8A everywhere, all the time. Osting also collected and rebuilt his own cars from Model Ts to a 1957 Thunderbird. He was a member of the ModelT Club of Southern California and the National Horseless Carriage Club. He contributed for many years as a member of the American Legion in Glendale and Burbank, CA as well as the VFW since 1994 in Pacific Beach, CA.

Richard Osting is a brave, kind, brilliant man with integrity and true honor. He traveled the world with his beloved wife of 31 years, Irene and resides here in San Diego with her and his devoted daughters and grandchildren. A rich great life we, his family are proud of including his loyal service in WWII.