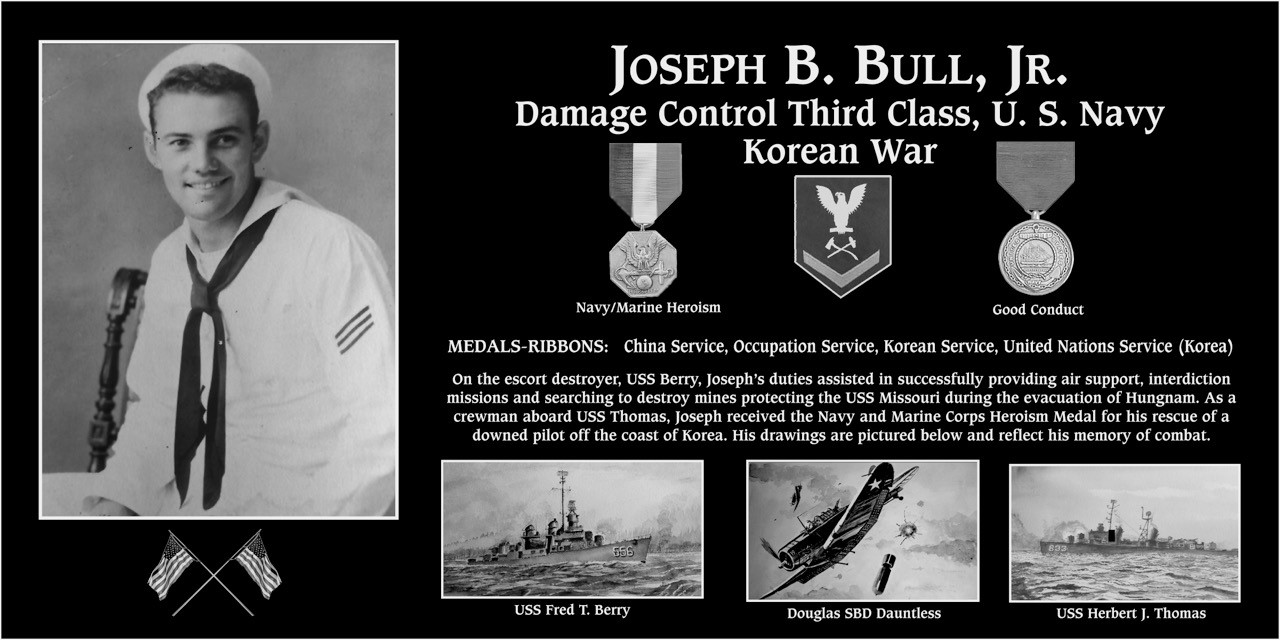 This plaque was donated by family and friends of Joseph B Bull Jr.

May He Rest in Peace and Honor

Joe Bull was a hero both in wartime and in his life as a civilian. Joe was proud to serve his country and took away from his experience snapshots in his mind that later became forever remembered through his exceptional ability to draw and sketch. His love of country and experiences in the Navy were shared with many. The stories Joe told were as vivid in detail as his drawings. Joe loved to joke, laugh and share his talent of cartooning as well. Joe entertained thousands of people throughout his lifetime as he traveled the roadways of California as a truck driver after his service in the Navy. Joe would capture the time he spent with friends and complete strangers, with a sketch that he would leave behind as a token gesture, often times on a paper napkin. The artwork engraved on this plaque displays his talent, but more importantly, it is our way of sharing his artwork for friends, family and complete strangers, just as Joe did his entire life.

Citation from the Secretary of the Navy

The President of the United States takes pleasure in presenting the

For service as set forth in the following Citation:

“For heroic conduct as a Crewman on board the U.S. S. HERBERT J. THOMAS while assisting in the rescue of a downed pilot in danger of drowning off the coast of Korea on 5 December 1950. Without stopping to provide himself with a life jacket or life line, BULL unhesitatingly plunged into the water to aid the pilot who, weight down by the parachute and unable to grasp the life line thrown to him, was rapidly weakening in his struggle to cling to a rubber raft which was being tossed dangerously by the rough seas. Despite the possibility of drowning from an extended period of immersion in the icy seas and the danger of being dashed against the ship’s side by the buffeting waves, he secured a line around the survivor and brought him close to the vessel. Struck by the plunging body of the airman who fell back into the water when the line broke, BULL recovered quickly and again carefully fastened the line to the victim who was hauled on board and given medical treatment. His quick initiative, unselfishness and courage in risking his life to save that of another reflect great credit upon BULL and the United States Naval Service.” Secretary of the Navy, Dan A Kimball