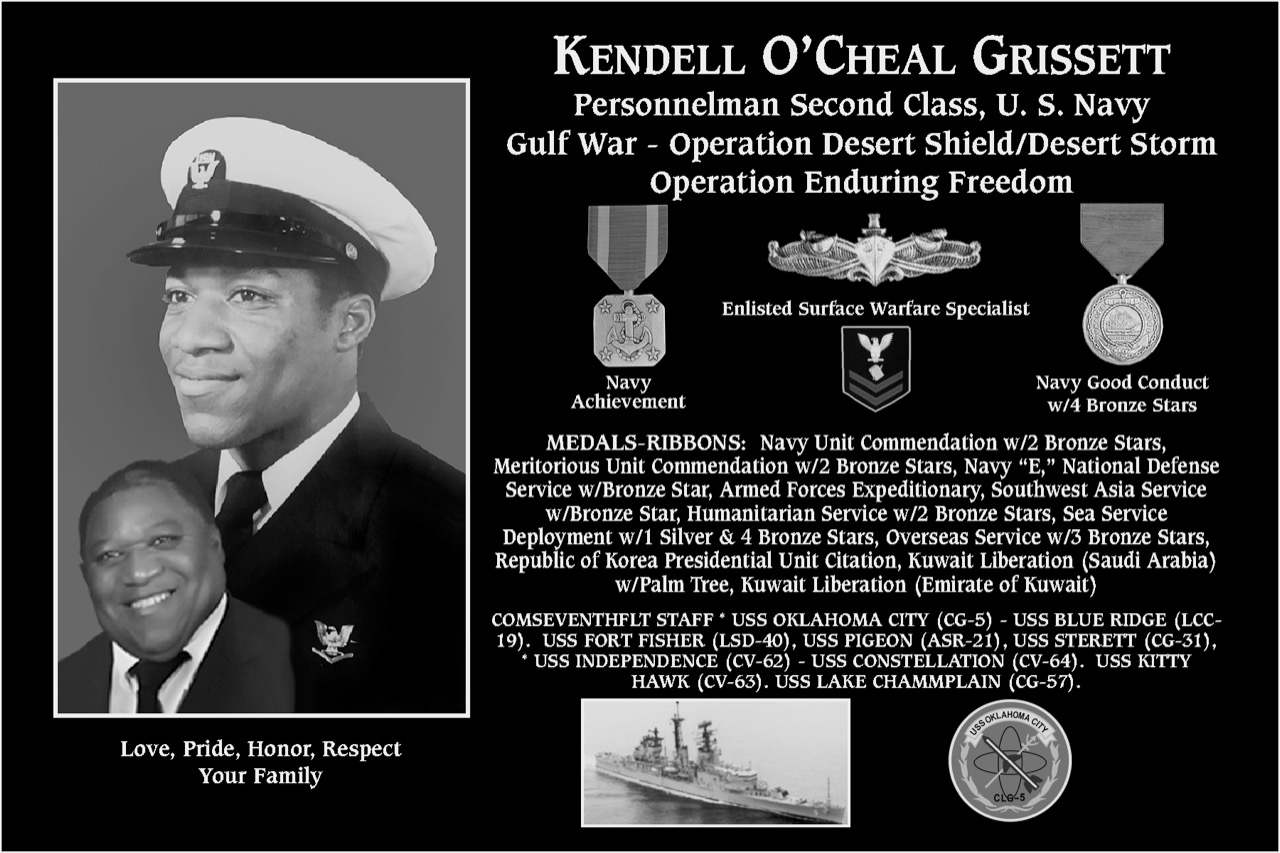 I Kendell O’Cheal Grissett was born 13 November 1959 in New Hanover County Wilmington N.C. But I lived forty miles away in a small community called Cerder Grove in Supply N.C. I was born to my Mother Jeanette Grissett and Father Henry Smith. But my grandparents Johnnie E. Grissett and Dessie V. Grissett raised me. I went to West Brunswick High (Trojans) where I Played Junior Varsity and Varsity Football left Halfback, Safety & cornerback & for Baseball outfield. Also played Basketball on the ships team the USS Blue Ridge, also for PSD Pearl Harbor HI, PSD Cubi Point Philippines, and VS-37 Squadron at North Island in San Diego.

While growing up my most special times I had was when I played with all the little kids around the community & cousins. Across the road from my house in a field, we would all play baseball, football and at my house or over at Andres we would play basketball. I would keep stats just like in a real game, for everything we played! about every Saturday and Sunday we would play. Priscilla Herring, I called (Lynn Swann), Myrone Grissett (Coot), Michael Grissett, Tora Herring, Mathis Herring, Victor Galloway I called the (Fullback), Darren Bryant (Red), Anthony Bryant, Carlos Hewett, Spencer Fullwood I called (Spencer Haywood), Ronnie Bryant, Carnell Bryant (Pee Wee), and Jarvis Herring even though he was so little then, he would always run out there to play.

My Family/Siblings. My most favorite Aunt in the world is Bernette Grissett Green, Laura Grissett, & Aunt Ellen Daniels. My sisters Valeria M. Grissett and Samantha A. Grissett and she has been missing since 2009 until this day. Miche Smith (Meon), Melba Terrell (Melba Moore) Brothers Kendelon Smith and Kwana Smith.

My Commands: I want to RTC Great Lakes, IL (AKA) Great Mistakes. Ha! Ha! After Boot Camp I went to my first duty station:

Reported on 29 May 1979 to 7th Fleet Staff, onboard the USS Oklahoma City (CG 5) (AKA) Okie Boat last of the Wooden deck ship’s, in Yokosuka JA, six months later went to the

Air Anti-Submarine Squadron thirty-seven (VS-37) on 28 Jan 1988, which deployed on board the USS Independence (CV 62), USS Constellation (CV 64), all at Naval Air Station North Island in San Diego, CA,

Mr. Neil O’Connell – MC. Thank you for so much for what you did. when you mentioned my sea service, I never thought of it. It also said to me wow that was a lot of time at sea.

Special Thanks To, Director of Operations Ms. Denise Larkins & Administrator Mr. Martin Gallegos for helping me a long on this educational trip. Ms. Rebecca Evleth who is handing the posting part onto the Mt. Soledad site that it is done correctly.

Bless you all for all that you do and have done and for your support for me and all the people that came before and the ones after me. Thank You all so very much for what you do.