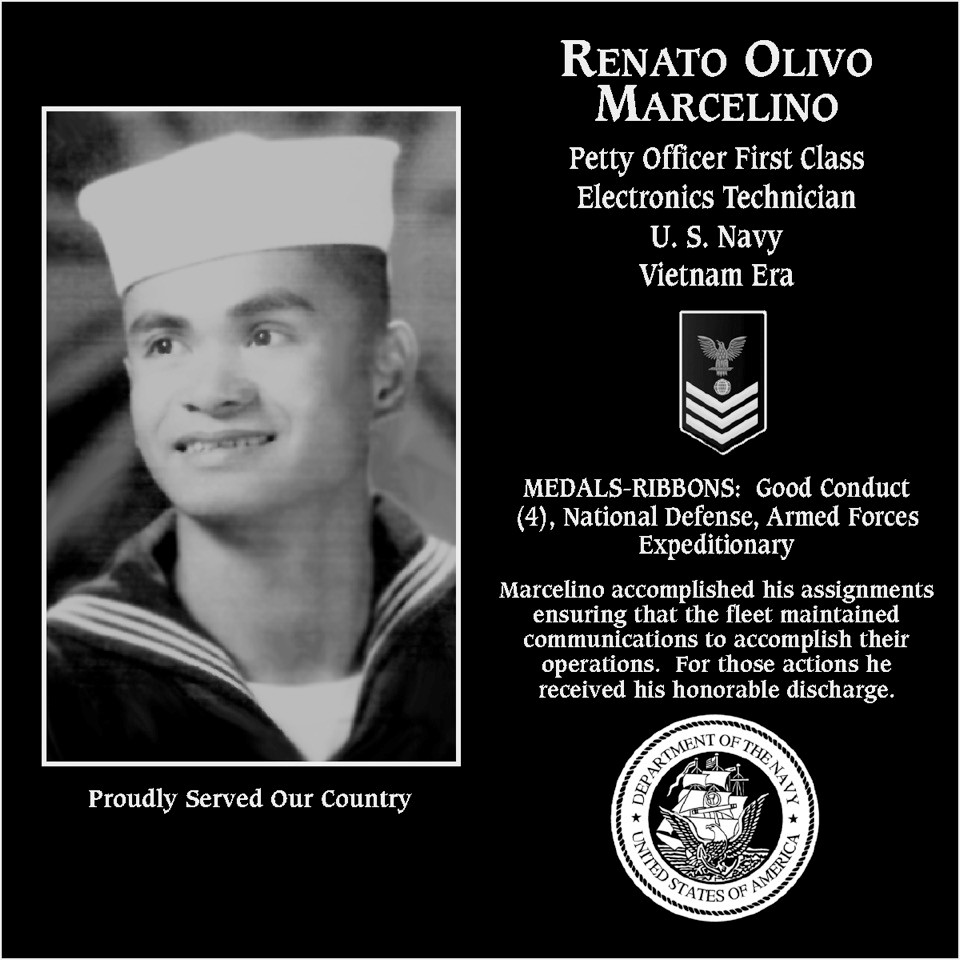 Renato Olivo Marcelino was born on October 25, 1935 on a coconut plantation in Barrio San Agustin, town of Gumaca, a Province of Quezon, Philippines.

He graduated from High School with honors and attended the College of Agriculture at the University of the Philippines, Los Banos, Laguna, Philippines.

While working as a Library Assistant and earning only 6 Philippine pesos a day, a friend in the United States Coast Guard wrote him a letter asking if he was interested in joining him and to earn more money. He sent in his application and to his surprise, Renato received a request for him to report for an interview. He passed the interview and was told to return the next day for a written test, which he also passed. He then was told to return early the following day for a final preparation for the trip to the United States. However, there was a large flood and his bus couldn’t cross the flooded road, forcing them to turn back. He was disappointed and put the thought aside of joining the U.S Military. However, one week later, he received another letter to report, which he was able to do.

He enlisted with the U.S. Navy at Sangley Point U.S. Naval Base in Cavite, Philippines on April 12, 1963.

His boot camp training was at the the Naval Training Center in San Diego, California. The Filipinos during that time were recruited for the Navy as stewards, so his first 10 years of service was working in the housing quarters of Captains, Admirals, and their families. Renato enjoyed his service to the Officers, as he had motion sickness when he was aboard the Navy ships.

Later, however, he decided to change to electronics rating so he could learn skills other than cooking and cleaning. His duties aboard the ships included repairing and maintaining shipboard electronic communication equipment and his last tour was at San Clemente Island to maintain the Navy radar system. Upon retiring from active duty, Renato continued with the Navy as a calibration technician at the Naval Air Repair Facility at North Island, California as a WG-12.

He transferred to Fleet Reserve with an honorable discharge on May 1, 1983.

He is thankful for God’s providence. God’s loving hands did guide Renato’s destiny from the remote and quiet barrio of San Agustin to the peaceful neighborhood of Paradise Hills, San Diego, overlooking Mission Bay. He is most thankful above all for his loving family and a free and great country! He was proud to serve this great Nation. THANKS BE TO GOD.