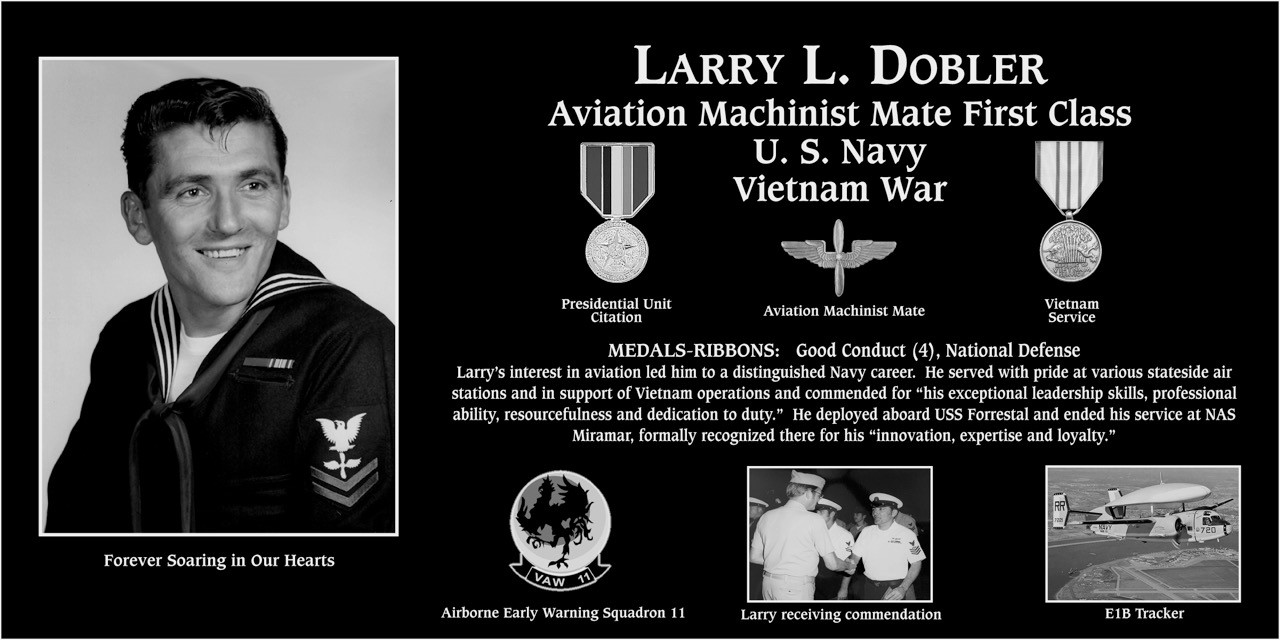 Larry L. Dobler was born on September 17, 1937, in Fargo, North Dakota. He grew up on a wheat farm with his parents and brother, Donny and sister, Fanny.

He was sworn in on December 29, 1959 and went to Boot Camp in San Diego. Unfortunately, he caught pneumonia in Boot Camp and so that extended his training. After Boot Camp he was sent to Alameda, California and was slated to join the Midway when he got orders to go to school in Millington, Tennessee.

On February 26, 1961, he married Sandra Southland in Whitetail, Montana and went straight to school in Tennessee without joining the Midway.

After school he got orders to Whiting Field in Milton, Florida and was stationed there until January 1964. While stationed in Milton Florida, his first two daughters were born. Laurie and Cindy.

His next orders were for VP 48, a seaplane squadron At North Island Naval air station Coronado California. That assignment was a sea duty. He served in Subic Bay in the Philippines as well as offshore in Vietnam during the Vietnam war.

He was also stationed in Alameda California for sea duty and would catch navy flights home to San Diego on the weekends. San Diego was where his third daughter was born, Misti.

He was an aviation machinist mate first class also known as ADR1, until he switched over to Jets and became ADJ1. He completed the Mediterranean cruise aboard the USS Forrestal as well. His last duty station was at NAS Miramar. He retired from the Navy from that last duty station in August 1980.

Larry’s interest in aviation let him to a distinguish navy career. He served with pride at various stateside air stations and was commended for “Exceptional leadership skills, professional ability, resourcefulness and dedication to duty.” He deployed aboard the USS Forrestal and ended his service at NAS Miramar and was formally recognized there for his “innovation, expertise, and loyalty.”