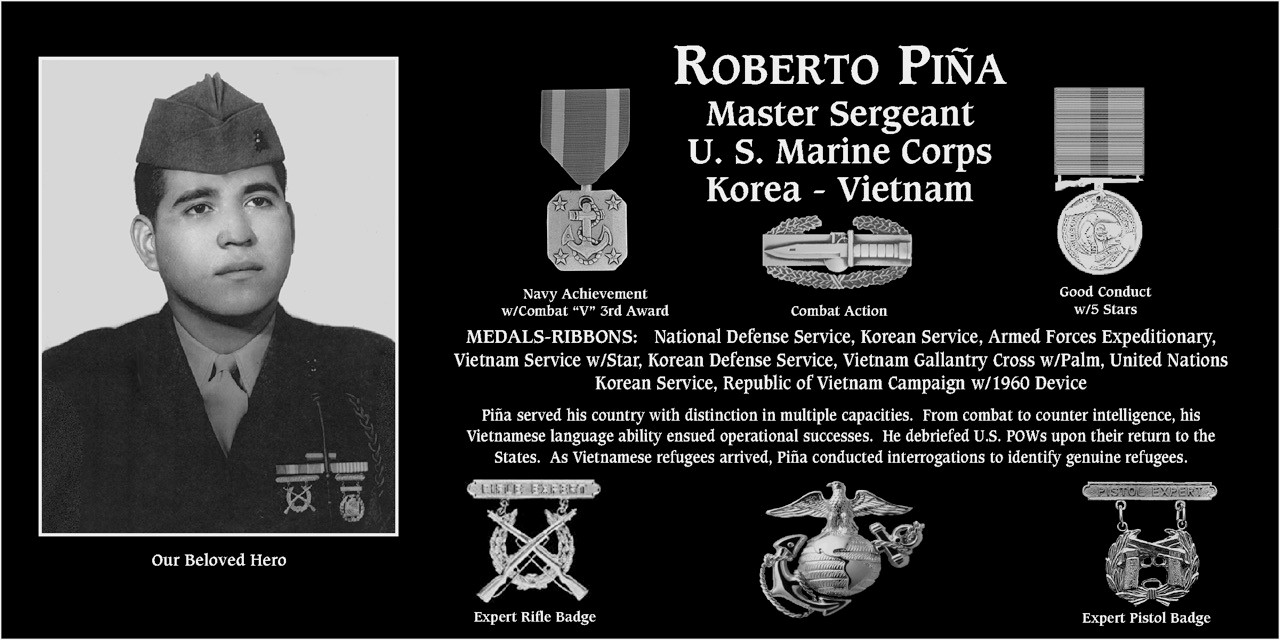 Roberto Pina was born October 29, 1934 in Brownsville, TX. After Attending Brown-ville High School, he left the 10th grade and joined the Marine Corps during November 1952 – with a promise to his mother that he would continue his education while in the military. He received his High School diploma from the United States Armed Forces Institute, Madison, WI in 1954.

From, 1952 to 1956, Pina served in Korea, the Republic of the Philippines and various other overseas locations and then, Camp Pendleton, CA, He then served in the active reserves with the 4th Recon Battalion in Corpus Christi, TX. As a reservist, he served as an Interpreter/ Translator for a Federal Civilian Agency during the Cuban Crisis in the early 60’s/

During 1963 Corporal Pina returned to active duty at Camp Pendleton, until 1964 when he was assigned to Okinawa, Japan and then Vietnam. Upon his return to the US in 1965, Sgt. Pina was assigned to Marine Corps Air Station El Toro, CA as a brig warden until 1966. During 1967, he attended a one-year course at the Vietnamese language school. In 1968, as a Staff Sergeant, he was assigned to Ft. Holabird, MD (Baltimore) for a Counterintelligence (CI) Agent Course.

In 1968, SSgt. Pina was ordered to Vietnam for a second tour as a CI Agent and Vietnamese Linguist. Staff Sergeant Pina participated in various operations in Vietnam as a CI Agent combatting communist forces and was awarded the Navy Achievement Medal with a Combat ‘V’ for outstanding performance of duties.

On his return from Vietnam during 1969. He was assigned to the 1st Marine Division at Camp Pendleton, in various CI capacities, including assisting the US Secret Service in providing VIP security for President Nixon at the West Coast White House, San Clemente, CA.

During February 1973, Gunnery Sergeant Pina was a member of a debriefing team for the US Prisoners of War when they were released from North Vietnam (Operation Homecoming). The information gained from POW’s was used to determine the identification of other POW’s still in captivity – and those who died while in captivity. GySgt Pina was awarded a second Navy Achievement Medal.

During 1974, GySgt Pina was assigned to Okinawa, and then returned to Marine Corps Recruit Depot, San Diego, CA in 1975 where he was assigned as a CI Agent.

In April 1975, he was assigned as a CI Agent at the Vietnamese Refugee Camp, Camp Pendleton, CA (Operation New Life) to oversee security operations in the safeguarding of distinguished Vietnamese Government officials. (President Thieu and members of his cabinet) His duties also entailed random screening of refugees in attempts to detect communist infiltrators/ sympathizers. Master Sergeant Pina received a third Navy Achievement Medal for outstanding performance of duties.

From 1977 to 1979, MSgt. Pina retired from the US Marines after 20-plus years. During Jan 1980, the Defense Security Service, (Department of Defense) hired Mr. Pina as a Special Agent and Security Inspector and after 20 years of civil service, he retired again during May 2000.

Most of this civil service time was at Goodfellow AFB, San Angelo, TX. After September 11 (9/11), he was rehired as a Contract Investigator to conduct background investigations for personnel who enter the military and Civil Service employees. During 2003, Mr. Pina decided to retire altogether because most of his earning went back to Uncle Sam. (A fine Uncle he turned out to be!)

Mr. Pina praises our dear Lord for granting him good mental (he thinks), physical, and Spiritual health – and a righteous path to follow. Mr. Pina maintain a youthful and healthy appearance due to a positive attitude and not worrying about things over which he has no control.

Mr. Pina enjoys his leisure time golfing, running, reading, mentoring at the Texas Youth Commission (Halfway House), and weekly poker sessions with his friends hoping that he can get back some of the resources that Uncle Sam takes.