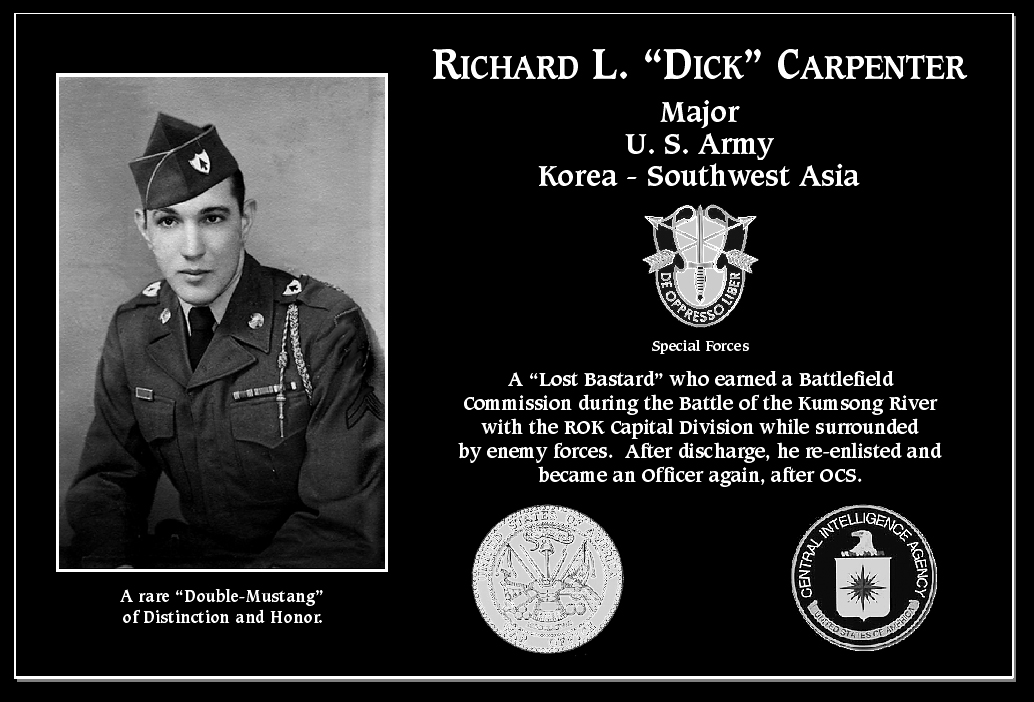 Richard Carpenter was a soldier from the World War II era * into the Vietnam conflict. He started as a private and ended his active duty career as a Major.

* We believe this is the correct birth year but he used 1928 along with a forged parent signature that and being 6’ 2” allowed him to join the Army in 1945! He used 1929 in his 1947 enlistment until his mother had the Red Cross find him. He then used 1930 for the rest of his active duty career. When he applied for his military pension, it was rejected because of his under age enlistment service. But adding his reserve time he got his pension anyway.

He was known as a "Mustang." This is a soldier who starts out in the enlisted ranks and becomes an officer. He did this twice. He received a battlefield commission (16 July 1953) in Korea to Second lieutenant when he was an acting Sergeant and while with the ROK (Republic of Korea) Capitol Division during the Korean War. He gave up his reserve commission after the cessation of hostilities and returned to his family in Germany as an enlisted soldier. His specialty early in his career was automatic weapons then later, after OCS in 1959, it was in supply and logistics. He also spent many years working with US and foreign troops, part of which was with the U.S. Army Special Forces.

Richard had been a ship welder (lying about his age and very tall!) during World War 2 and joined the Army as a private at the end. He was a member of the occupation forces in Germany. He served as a guard at Dachau and during portions of the Nuremburg Trials.

He worked with DP (displaced person) battalions in 1947-1948 primarily during the Berlin airlift. He helped train the new German army and even Greek troops in Europe to about 1950.

He married a German National without permission and was reduced in rank. They were other factors involved that were never disclosed.

He served in Korea during that conflict with the ROK (Korean military) 2nd Battalion of the 26th Infantry Regiment of the Capital Division. Near the end of that conflict his unit was cut off and he took command receiving a battle field commission over the radio. He was there to battlefield test new top secret radar units, now called ground surveillance radar.

Corporal Carpenter, then acting Sergeant, was given a battlefield promotion by radio to a 2nd Lieutenant after his unit was cut off by enemy forces and he became the senior in rank of the survivors. He received no medal or recognition for his actions despite holding his precarious position with an ROK unit and disrupting enemy supply lines via the radar observation and artillery intervention. They were behind enemy lines from 14 to 20 July 1953 on Hill 433 until the command was relieved. He resigned his commission when he returned to the States then re-enlisted. He then was posted back to Germany, where he reverted back to his regular Army rank of corporal.

He assisted in transporting refugees from the north of Vietnam at the beginning of the division of that country. This included several excursion into the interior from the Haiphong area recovering lend lease equipment. He spent time training irregular forces against communist aggression in South-East Asia. He also trained regular U.S. troops at Fort Leonard Wood, MO & Fort Ord, CA, as an enlisted man. After OCS, as an officer, he continued training troops Fort Riley, KS and at Fort Jackson, SC. He was posted back to Germany in 1964 where he retired in 1965 from twenty years active duty and moved to San Diego, CA. He saw combat in Korea and South-West Asia.

He continued his military involvement by joining a Special Forces Reserve unit 1987 while working for San Diego County Probation Department. He was recalled to active duty several times during this period. He also continued his contract work with the CIA. His military retirement included a disability award for combat injuries.