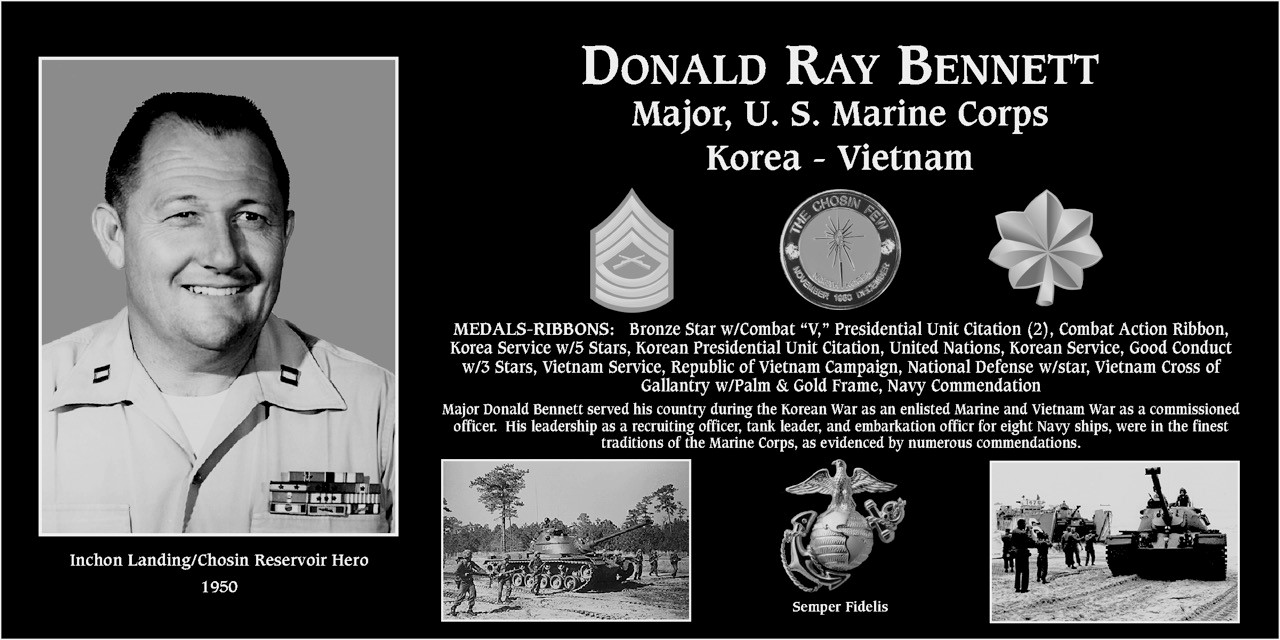 In order to earn money as a young boy, Don Bennett sold newspapers to the Marines in San Diego. He was so impressed with the Marines and the way they treated him, Don determined then that he wanted to be a Marine. He enlisted in the Marine Corps Reserve when he was just 15. On his 19th birthday, as a young buck sergeant, he boarded an Army transport ship in San Diego which was headed to Korea. On September 15th 1950, a tank commander and the youngest of his untrained crew, in a new model tank none of them had ever seen before, Sergeant Bennett successfully made the Inchon landing and participated in the capture of Seoul, Korea. Bennett is also one of the “Chosen Few”, who fought at the frozen Chosin Reservoir where temperatures dipped to -50 degrees. As part of the 1st Marine Division, 1st Tank Battalion, Company B, he was one of 15,000 American troops at the Chosin Reservoir when 120,000 Chinese attempted to over-run and annihilate the Marines. Sgt. Bennett proved himself a true Marine several times during the next few weeks. Under heavy attack he saved a crew when he courageously nudge his tank against a disabled and burning tank and waited until its crew could escape. The crew entered through the bottom hatch of his tank and crowded into Bennett’s tank. He was able to transport them to safety. He also commanded the last vehicle (tank), to fight its way to the sea from the Chosin Reservoir. Bennett became the last tank off the mountain when he and a few Marines decided to help their fellow Marines under attack. He had previously been ordered to abandon his tank because a disabled tank had blocked the narrow mountain road ahead of him. On foot and about a mile down the road, the men could hear a fire-fight break out and knew they needed to go back and help. Bennett and small group of men ran back up the hill and Bennett again took command of his tank. Young Sergeant Bennett later positioned his tank to give cover to engineers while they waited to blow up a bridge he had just crossed until it was determined there were no more troops left behind. He remained in the Korean conflict until August of 1951 and suffered injuries from frostbite. Bennett’s commanding officer recognized his leadership abilities and recommended him for the Naval Academy. He was denied because he is color blind. SSgt. Bennett returned stateside to serve as a Drill Instructor at Marine Corps Recruit Depot San Diego. Although he had never been to boot camp himself, he often produced the “honor” platoon. Between 1953 and 1955 Sergeant Bennett was assigned to the Inspector-Instructor staff for 4th Tank Battalion in San Diego to recruit and train Reserve Marines. From 1955 to 1958 Sergeant Bennett was a member of Flame Platoon, 1st Tank Battalion, 1st Marine Division at Camp Pendleton. During that time he had served as the Platoon Sergeant for Flame Platoon in Okinawa and the club manager for the Officer’s Club aboard Camp Hansen. He returned to Camp Pendleton in 1959 and served as the Platoon Sergeant with same Flame Platoon until the Don disagreed with the Sgt Major and the Colonel agreed with Don. The Sgt. Major transferred Don to re-enlistment retention, which was considered a “get even” or punishment. Retention was not considered a good billet and re-enlistments were only at 8-10% As Battalion Career Advisor and later as the First Marine Division Career Advisory Chief, SSgt. Bennett was responsible for setting up an aggressive program throughout the Division that resulted in a first term re-enlistment monthly rate of 25-35%. His program became so successful that the Marine Corp had to shut down training new recruits (boot camp) because so many Marines were re-enlisting. To prevent the imbalance from continuing, SSgt. Bennett was sent to Recruiting School and assigned to Recruiting duty in Ogden, Utah, in spite of the long-standing policy not to select recruiters who had more than 1 child. Don had 4 young daughters at the time. Ogden had previously been closed 3 times in 10 years because of low productivity and went 6 months with only 1 recruit. It wasn’t long before GySgt Bennett was making 150% of quota every year. He was recognized as Recruiter of the Year throughout the Western States for fiscal year 1965. Don was again offered a

commission before going to Viet Nam. Washington DC picked out 550 Sergeants to receive reserve commissions. Bennett was selected but told the officer who selected him that he was color blind. He was told he was personally selected and to fill out the paperwork. They were losing Lieutenants because of inexperience, and needed the knowledge of seasoned sergeants. He decided to take the commission even though he would lose $83.00 a month for 3 reasons: 1. He would be able to make the decisions and control his own destiny; 2. The commission had been denied to him in the past and now he could have it in spite of his colorblindness; 3. Because he thought he could keep his men alive. He only lost one man. He received the Bronze star with a combat V for exceptional performance of duties. While in Viet Nam, Lt. Bennett was offered a “safe place” duty station but declined. He continually offered himself first when the job was dangerous. He wanted his men to have the opportunity to have a wife and children and felt that he had already enjoyed those blessings. Lt. Bennett was able to permanently retain his commission. Only about 10% of the temporary officers were selected to keep their commissions. Upon returning from Vietnam in 1967, 1st Lt. Bennett was assigned to the 3rd Recruit Training Battalion as a Series Officer. He was involved in the supervision of recruit training. He later served as the Depot Career advisory Officer, again involved in the retention of Marines, during 1969. By August 1971 he was the Squadron Combat Cargo Officer for the eight ships that comprised Amphibious Squadron Five, homeport San Diego. While serving with the Navy ships he was in and out of Vietnam several times in performance of his duties and was awarded the Navy Commendation Medal for meritorious service. In 1974 Capt. Bennett again returned to Utah to be the Officer in charge of the Recruiting Station in Salt Lake City. He was able to bring enlisted procurement from previous 3 years enlisted rate of 50-60% to 100% of quota. Captain Bennett was personally requested by the Admiral of the Amphibious Group to be the Senior Cargo Officer for the Pacific Area. He again was awarded the Navy Commendation Medal for his coordination and planning efforts. During his time with the Navy, Captain Bennett served on the Bridge and piloted the ship…something a colorblind young man was never supposed to be able to do. Don Bennett has become one of those exemplary Marines that he admired as a young boy, and is an honor to his country. With more than 31 years in the Marine Corps, Don Bennett will say that he would do it all over again.