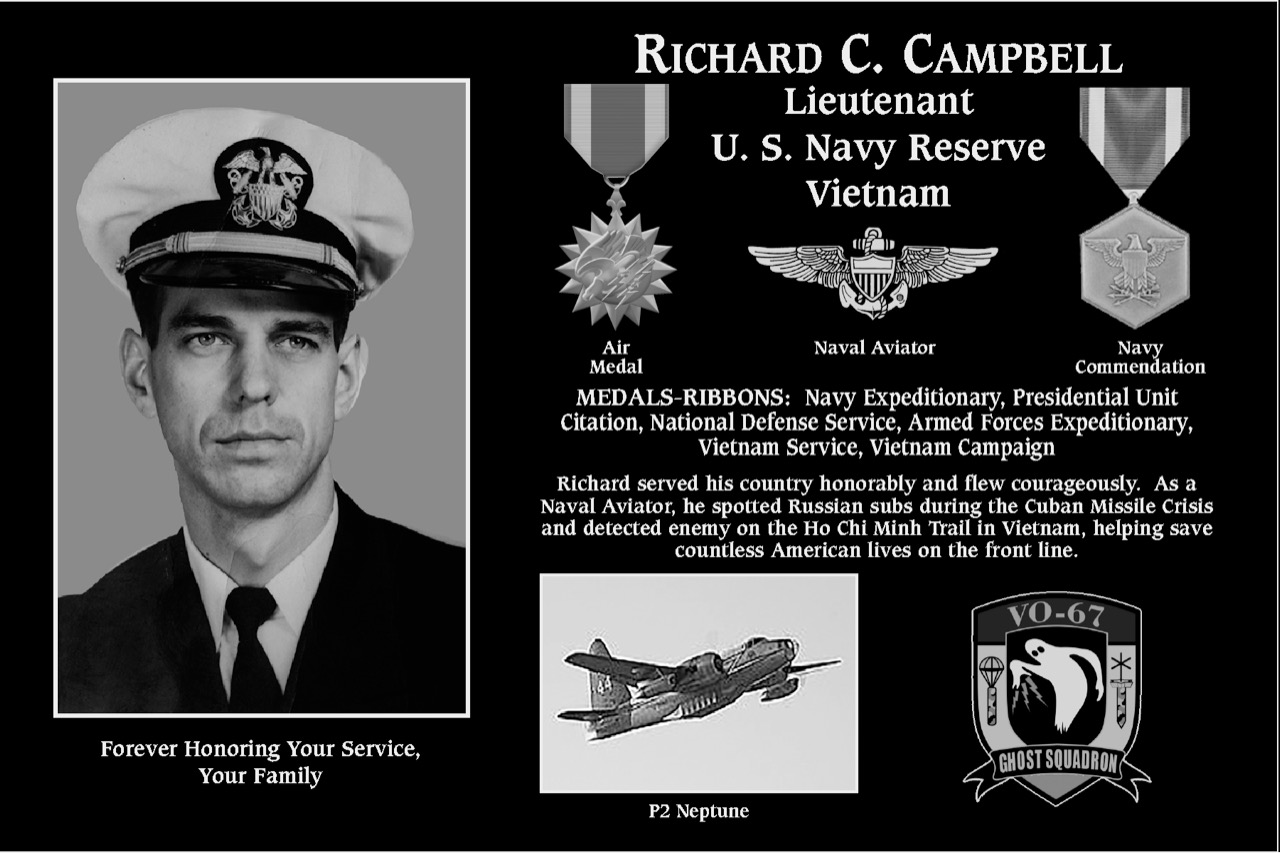 The fourth of five children, Richard Cherry Campbell was born on January 3rd 1937 in Osweego, Illinois. Growing up all-star athlete, Richard earned a number of awards during his teenage years and was honored decades later by being inducted into Osweego high school’s sports hall of fame. While attending Iowa State University, Richard continued to play sports and competed at the college level. He was always a hard worker and competitor. These qualities served him well as he looked to life and a career after college.

Like many young men of his generation, Richard was a patriot and eager for a challenge. Soon after graduating from Iowa State, Richard’s naval career began in April 1960 as a young officer. He attended basic officers training and then flight school in June 1960.

In 1961 with freshly pinned on wings signifying his graduation from flight school, Richard was assigned to VP-5 in sunny Jacksonville, Florida, a welcome change of pace from the cold Midwestern Winters he was used to. At VP-5 he flew the P2V-5E, a legacy WWII era submarine hunter in numerous anti-submarine tactical training exercises.

In October, 1962, Richard flew down to Guantanamo Bay as part of a three plane detachment. These were very tense times for our country and as the Cuban Missile Crisis unfolded, Richard was in the thick of it over the waters between Florida and Cuba searching for Russian subs. During the later part of October his detachment in coordination with a US Navy destroyer detected a Russian submarine and marked its location with smoke. The gig was up for that sub! His plane was the last to leave the scene before the submarine surfaced.

In 1965 Dick worked hard in training with his squadron, but also found time to have some fun with his fellow officers and men during two deployments to Sigonella, Sicily. Richard had earned a reputation as a strong pilot in a very short time.

In 1966 he was assigned to the Pacific Missile Range at Pt Magoo, CA where he carried men and material while flying a new airframe, the C-54. As if already flying multiple aircraft wasn’t enough, Richard took up learning to fly H-19 and H-34 helicopters. He would later find out that he was only the second Naval Aviator to be designated a helo pilot without having ever gone through formal helicopter training and school in Florida.

It was during his time at Pt Magoo that Dick learned about a special squadron being developed for use in Vietnam. He phoned the Navy Bureau in Washington DC and volunteered to join. Given his excellent reputation and experience, he was immediately assigned to NAS San Diego as a OP-2E instructor pilot for incoming pilots of this new, secretive squadron, VO-67. Soon after, he joined the squadron himself and it was off to Vietnam. The squadron existed for just a little over a year, from Feb 1967 to July 1968, but they accomplished an incredible amount in that short time.

He was a poker player and acey duecy player. Think he got a few bucks from me.

Dick Campbell was one of the instructors the pilots had going through refresher training at North Island. When our training was completed he along with Jim Koci and Doug Donahue were assigned to VO-67. A good guy and a good pilot. He flew with Cdr Gire in crew 3. I don-t know where he went after VO-67.

I was a friend of Richard (Dick) Campbell in VO-67. I met him in 1967 when I checked in to VP-31 at San Diego to get pilot training on the P-2 airplane. Dick was an Aircraft Commander and instructor pilot on the P-2. I flew several training flights with him. He was a good professional pilot and his nature was such that you learned in a relaxed atmosphere.

After deploying to Thailand, when we were not flying missions, we would sometimes do training flights. I got to fly several of these flights when Dick Campbell was the Aircraft Commander. I always enjoyed flying with him.

Being deployed at a remote base in far Northeast Thailand with nothing but an O-Club for entertainment can get boring in the evenings. A group of the us junior officers started playing a friendly game of low stakes (nickle, dime, quarter) poker most evenings. Dick and his roommates volunteered their room for the game each evening. We told jokes, stories, got a lot of laughs, and had a good time during these poker games.

I wish him the best,