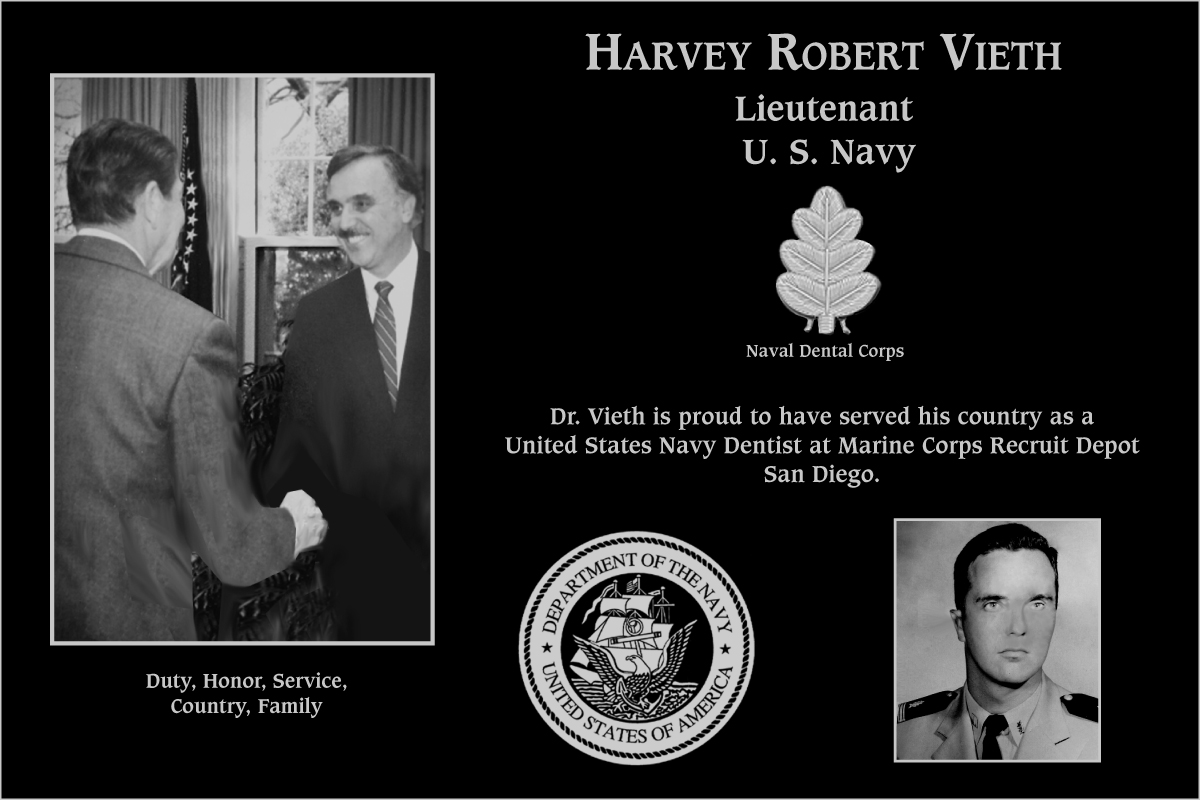 Dr. Harvey Robert Vieth was born in Berlin, Wisconsin on Veterans Day, November 11, 1934. He grew up in the small town of Ripon, Wisconsin.

Harvey’s father passed away unexpectedly when he was 7 years old. Through this tragedy, they would soon learn of the strength, compassion and drive that their mother, Jessica (Jessie), possessed and taught to each of her children Marty, Harvey and Nancy. Jessie was an independent woman way ahead of her time who operated a men’s clothing store in downtown Ripon. She was a strong and loving mother who lived by the words, “Don’t talk about it, just do it”. Words that inspired Harvey who was committed to changing the lives of those who struggled and needed some help along the way.

Upon completion of his active duty commitment with the Navy in 1963, he moved his young family to Colorado Springs, Colorado. There he opened his first dental practice in 1965 and went on to successfully practice dentistry full time for the next 16 years. In 1980, he was elected as the County Commissioner for El Paso County, which includes Colorado Springs and the surrounding area. During his time as County Commissioner, he changed many lives, served on numerous committees and was well-known and respected as an influential leader that got things done in the community.

At the age of 47, he was called by President Ronald Reagan to serve the Federal Department of Health and Human Services in Washington, DC. Harvey proudly served under the President’s Administration as National Director, Office of Community Services and as Chairman of the Federal Task Force on the Homeless from 1982 to 1987. In 1983, he was assigned to the Office of Organ Transplantation and also served as Director of Family Assistance, which is the Federal welfare system. One of his key roles during his work was testifying before Congress on behalf of 14 major federal agencies which included the Department of Defense and Veterans’ Administration in support of homelessness.

Harvey also served as Executive Director of Camillus House, a homeless shelter in Miami, Florida whose population included many Veterans, and Development Director of Covenant House, one of the largest privately-funded childcare agencies in the U.S. providing services to homeless and runaway youth.

Harvey is the proud father of five children and step-dad to two. He has 8 grandchildren. Harvey and his wife, Marita, live in Denver, Colorado.