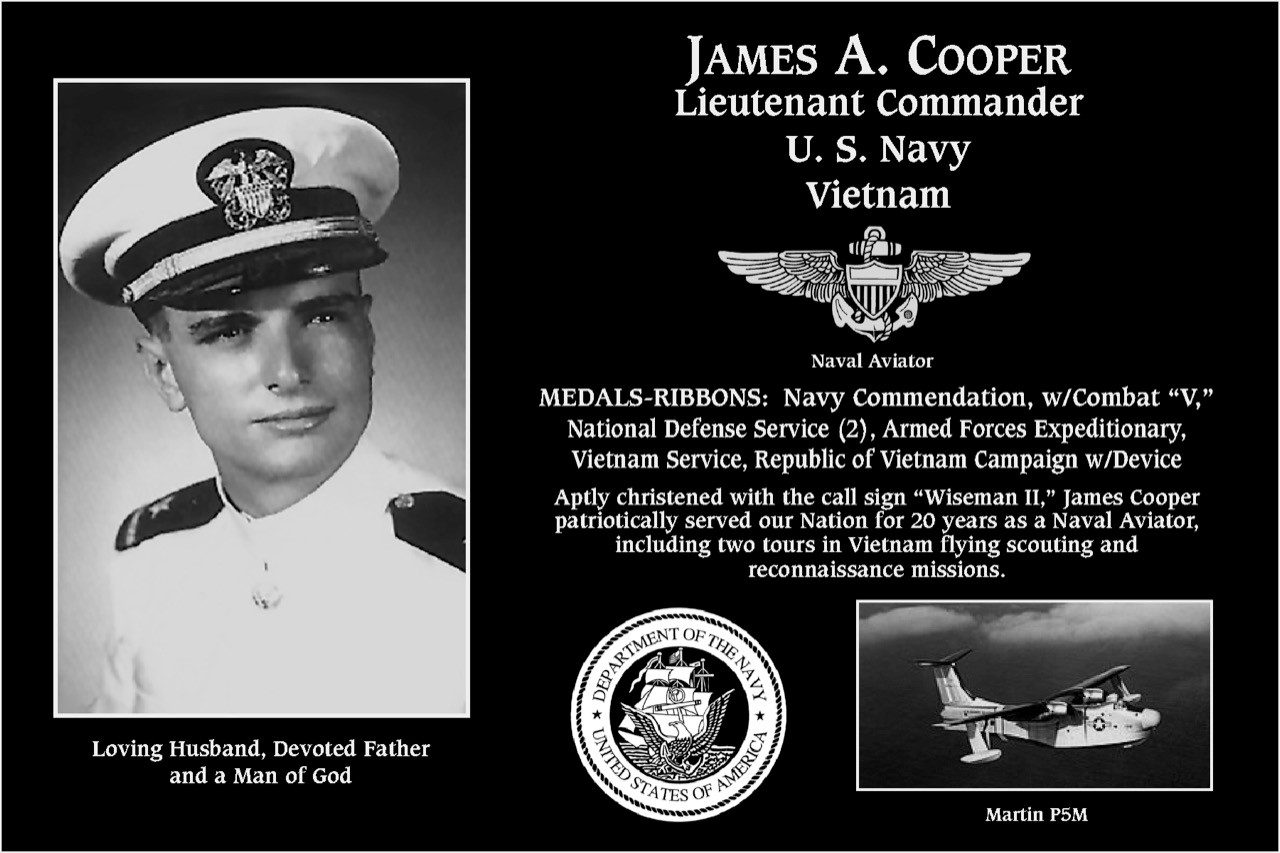 Jim Cooper was born in Marshalltown Iowa 30 Sep 1933 to Glenn Walter Cooper and Marjorie Shong and lived in Milwaukee, Des Moines, and Minneapolis throughout his youth. At 6 he welcomed his little sister Constance Cooper Hagen by asking his parents, “Can we keep her?” He graduated St. Louis Park High School in 1951 and studied at the University of Minnesota, first in Chemical Engineering and then graduating in Business in 1955.

During college, he was in the Navy ROTC which paid his tuition, books, and $50 a month which was augmented by working in the labs at Minneapolis Honeywell where he tested plastics for thermostats. His ROTC summer cruises included the battleship USS New Jersey with ports of call in Portugal and France; a three-week split between the amphibious base in Little Creek VA and an introduction to aviation at Corpus Christi TX; and the finally as a 1st Class Shipman on the USS Wisconsin.

Upon graduation, Jim was commissioned as an Ensign and went to Pensacola FL for Basic Training. This was followed by his aviation training in Corpus Christi. After receiving his wings, he married Patricia Roberta Dawkins on 8 March 1957.

First duty station was in Bermuda where he flew reconnaissance missions searching for Russian Submarines or search-and-rescue for downed planes, first as a navigator or co-pilot and later as the pilot. He received designation as a Patrol Plane Commander. Their first son, James Kenneth Cooper was born on 27 September 1958. They lived in Bermuda for three years and he was promoted to LDCR during this time.

Next duty station was the Fleet Electronics Training Unit PAC at NASNI in 1960, gaining new skills. During this time, their second child was born Robert Glen Cooper on 18 August 1960. This was followed by studying General Science Curriculum at Post Graduate School in Monterrey (Ford Ord) CA. It was here that their daughter Kathleen Elizabeth Cooper Mellor was born on 14 August 1962.

After this schooling, it was back to NASNI where he was assigned to Patrol Squadron 40—with a six-month tour in the Philippines at Sang Li Point. Flights from this location were surveillance missions to Vietnam prior to the beginning of the war. He received orders back to NASNI where his squadron was in a rotation with 2 others to fly in the Vietnam War. Their youngest child, Christopher John Cooper, was born 24 February 1965 while he was away on one of those rotations. During one flight, they took pictures of a Russian ship bringing aid to the North Koreans which featured a scantily clad woman sun-bathing on deck!

Many flights were made taking planes for repair to the East Coast and returning in planes that needed to be repaired on the West Coast. He remembers two harrowing experiences, one was on a flight taking parts from Norfolk to Bermuda with a disabled alternator; the plane had two engines but only one source of electrical power. Another was seeing a cylinder which had burst through the plane’s cowling, or skin, when they had “blown a jug” and lost an engine. With one good engine and a functioning “screaming demon,” they returned to base by flying at a low altitude along the shore of the Philippines with an hour to go.

During the remaining years of the Vietnam War, he served at NASNI as an Air Terminal Officer. Included in those days were the activities to bring home the POW’s. He remembers having Cybil Stockdale, wife of James Stockdale, come through his terminal on her way to advocate for the POW’s in Washington DC.

For two years, he was stationed at NAS Kingsville TX where he was an administrative officer managing the logistics of transportation for training of pilots to and from Yuma AZ. He also managed weekly “Winging” ceremonies for the graduating pilots.

In 1975, he returned to what was now “home base” to retire at NASNI. His commendations included four ribbons: the Commendation Ribbon (“I was alive in ’65), Military Merit, National Defense, and Armed Forces Expeditionary Service.