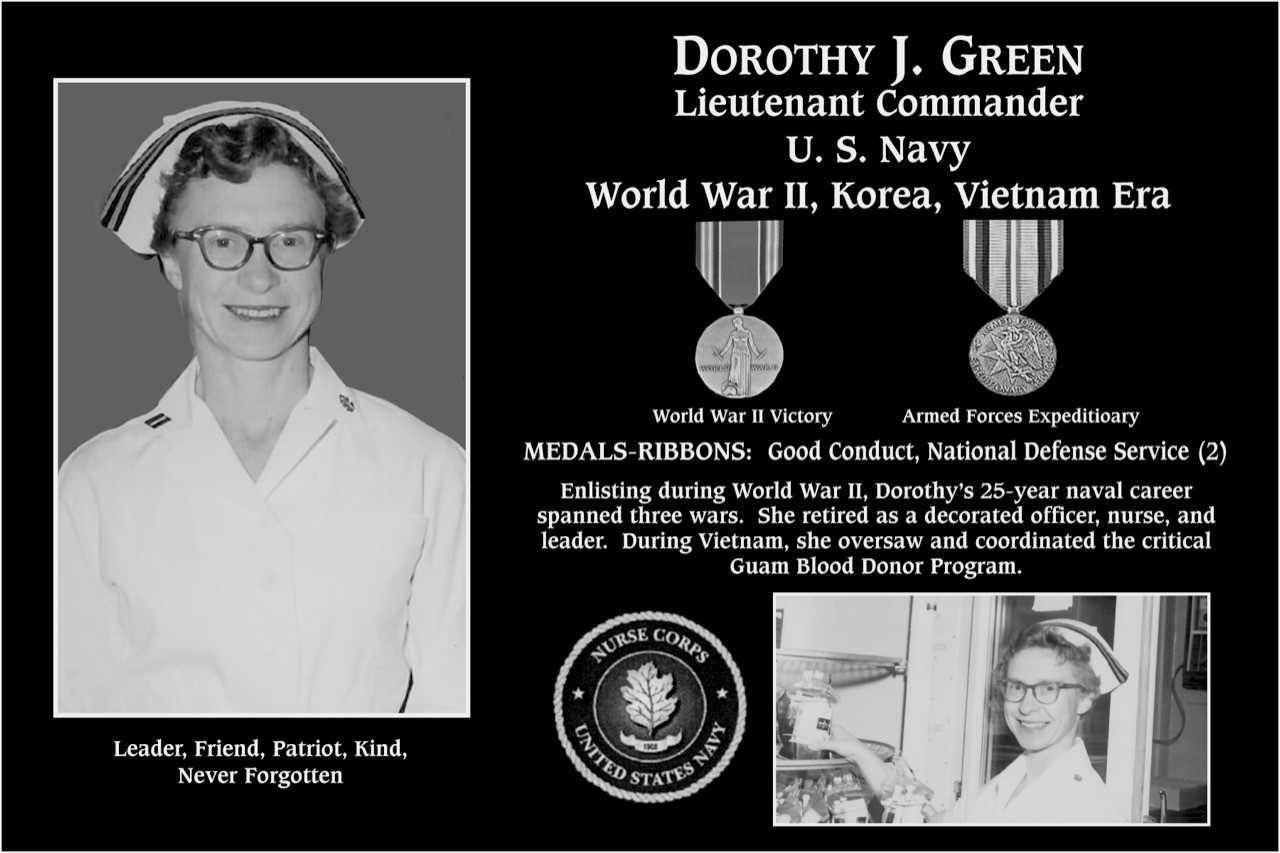 Dorothy J. Green June 15, 1923 - June 7, 2017 San Diego Almost age 94, LCDR Dorothy Green passed on June 7, 2017 at home.Dorothy was born in Woodward, Iowa. Her parents were Samuel and Edith Green. Her father's job as manager of a telephone company moved the family to many states: Iowa, Tennessee, Kentucky, Georgia, Illinois and South Carolina. Dorothy was a genuine "Georgia peach". She received an Assoc. Degree in Sociology at Winthrop College, Rock Hill, SC in 1944. She then joined the U.S. Navy and became a Navy Nurse until retirement in 1970. She coordinated the Blood Donor Program in Guam-one of her last assignments. She received numerous Navy medals and rank of LCDR. Dorothy had a love of American history; her retirement years were filled with U. S. travel discovering historical sites: e.g. Lewis & Clark Expedition journey. Her friend USN Cdr. Ruth Flickinger, was her travel companion. Annually, Dorothy would travel up the California coast to Pismo Beach, Oregon and Washington St. Dorothy was a member of St. Paul's Episcopal Church. She was a sports aficionado, playing golf, tennis well into her 80's, hiking the trails in Balboa Park. She was a season ticket holder of the S. D. Chargers and a Padres fan. Dorothy's uniqueness was exemplified by her unmatched amicability. She was without a doubt the friendliest person with a smile and a wave one would ever encounter.Dorothy will always be remembered by those fortunate to have known her. For the past few years, she has received care and assistance from Yuree Smatt (caregiver extraordinaire) and care coordination from long-time friend Kehrin. Dorothy is predeceased by close friend Cdr. Ruth Flickinger. Military funeral honors will be held on July 5, 2017 at Miramar Ntl. Cemetery at 0930. Donations may be made to: Alzheimer's San Diego 6632 Convoy Ct., San Diego, CA 92111. Memo: C4C (Collab.4Cure) or alzsd.org or charity of choice.

Published in The San