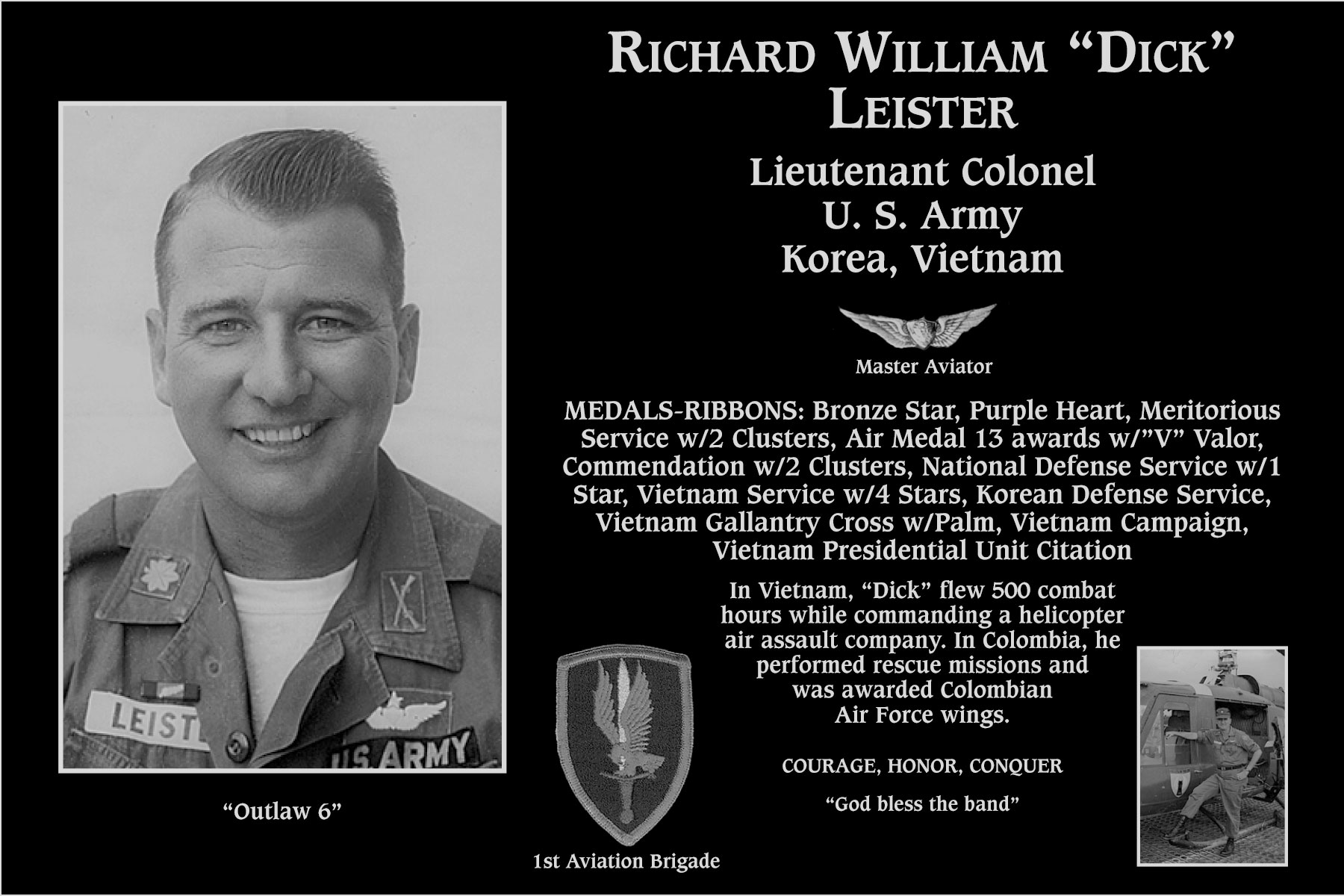 Richard William “Dick” Leister was born on September 19, 1929 to William E. and Gwendolyn Leister in Kittanning, PA. During his sophomore year at Kittanning High School, he was accepted on a full music scholarship to Valley Forge Military Academy in Wayne, PA. The next four years were transformative for Dick as he embraced the Academy’s values of discipline, honor, integrity, and responsibility. Dick was promoted to the rank of Band Captain, and upon graduation he was awarded the Order of Anthony Wayne, the highest award that Valley Forge could bestow upon a student.

Dick transferred to Michigan State College (now University) where he played clarinet in the Michigan State Symphony and met his wife, Jean. He graduated in 1954 with a commission as Second Lieutenant to the United States Army, Infantry Branch.

Dick’s military career began at the Infantry Basic Officers Course in Fort Benning, GA and was immediately followed by admission to the first flight class held at the newly opened Army Aviation Center at Fort Rucker, AL. When he concluded his fixed-wing training, he was admitted into helicopter training at Gary A.F.B. in San Marcos, TX.

In 1955, Dick arrived at Wonju, Korea and was assigned to fly the small Bell Medivac helicopters in the Korean Military Advisory Group. During his 18-month service in Korea, he was called upon many times to rescue Korean soldiers from the deep snow on the demarcation line between North and South Korea. His next overseas assignment was in 1959 to Bogota, Colombia flying for the Geodetic Survey. The terrain there was so severe, the Army required 1,000 hours of helicopter time to participate. During the three-year assignment, he rescued 14 persons from downed PBY aircraft in a stress situation where he lowered his co-pilot, two soldiers and a doctor into the crash site. After four days of cutting a landing site in the 300-foot jungle trees, he assisted the rescue in a small Colombian Air Force helicopter. For this action, he received a commission as a captain and received wings from the Colombian Air Force as well as a decoration from the American Ambassador.

Dick served two tours-of-duty in Vietnam at which time he commanded the 302nd Airlift Wing Helicopter Assault Company comprised of 900 troops and 32 helicopters known as the Outlaws. During this time, he logged 500 combat hours and earned 14 Air Medals, one for Valor along with a Purple Heart, Bronze Star, and the Vietnamese Cross of Gallantry with Palm.

In 1969, Dick was assigned to his alma mater, Valley Forge Military Academy as the Professor of Military Science where he was a member of the Superintendent’s Advisory Group. During this four-year period, he also assisted with the selection of cadets to attend Service Academies and was advisor to the Cadet Honor Council.

During his 24-year career, Dick logged over 5,000 hours in fixed and rotary-wing Army aircraft. Upon his retirement from the Army, he was employed for 15 years by General Dynamics Electronics Division in San Diego, CA from which he retired in 1989.

Dick strongly believed in giving back to his community. During his retirement, he volunteered for 17 years with the Retired Senior Volunteer Patrol (RSVP) of the San Diego Police Department, and he was a volunteer docent for 15 years at Mount Soledad Veterans Memorial, which he especially enjoyed. Dick was a great conversationalist and he welcomed visitors from around the world who came to visit Mount Soledad. It has been said, “Dick could bring the walls to life with his extensive knowledge of the honorees.” He always made a point to speak with the families that came to see their loved one’s wall plaque. He would ask them to tell him about their veteran’s life so he could pass the story on to others. It was important to Dick that each honoree’s story be told.

In 2013, Mount Soledad selected Dick as Veteran of the Year in recognition of his volunteer service and contributions to the community as a docent. The award was presented to him by the Veteran Museum and Memorial Center.

Dick passed away on July 9, 2020 at age 90, having lived a remarkable and fulfilling life. He was blessed to have celebrated 66 years of marriage to his wife Jean, with whom he raised three children. Dick and Jean are interred at Miramar National Cemetery in San Diego, CA.

“We who have passed from cloud to cloud and looked down at those who are earth-bound have belonged to a fraternity that few have experienced.”- Lt. Col. Richard W. Leister, U.S. Army (Ret.)