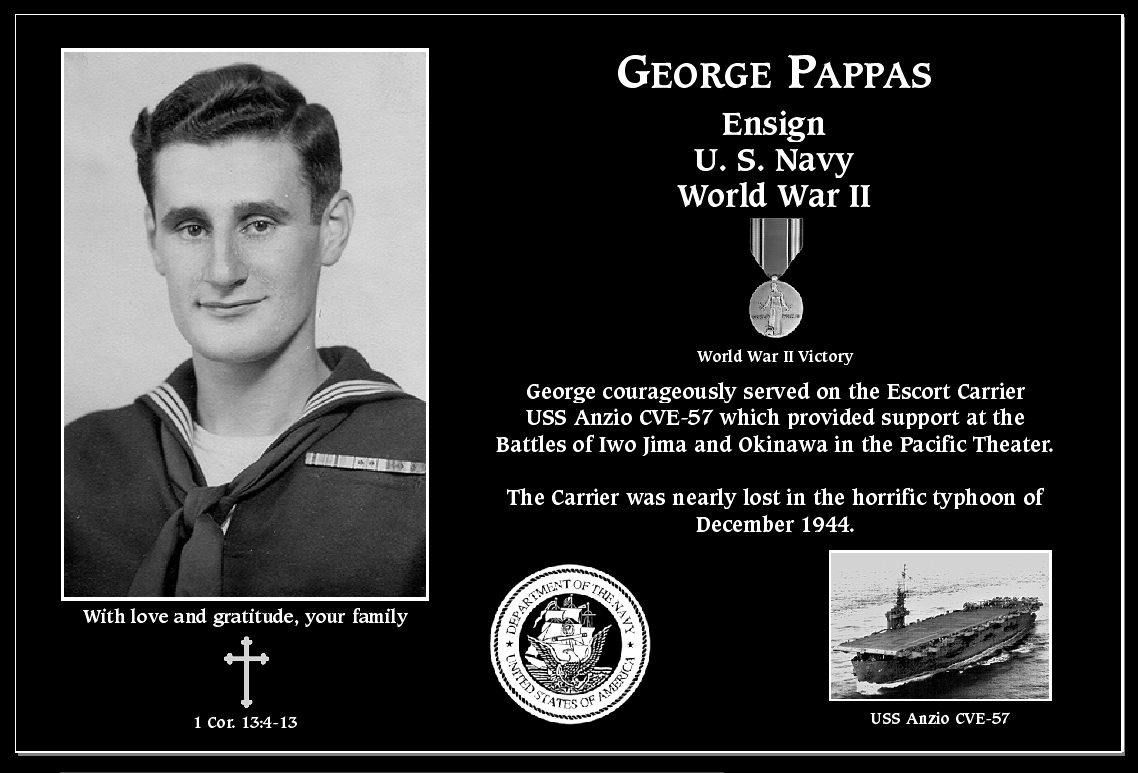 George Pappas was born on 28th of March 1921 in Duluth, MN. He was the sixth child of Leonidas and Georgia Panagiotopoulos. George graduated from Duluth Central High School and Duluth Junior College. Since jobs were scarce in Duluth, George obtained a job with Consolidated-Vultee Aircraft Corp. in San Diego as a draftsman. At that time Consolidated-Vultee was receiving large government contracts for building of the B-24 Liberator bomber. In May of 1944 George enlisted in the US Navy was assigned to the escort carrier Anzio (CVE -57) that sailed out of San Diego. The Anzio provided naval and air support to the battles of Ulithi, Okinawa and Iwo Jima. The ship was nearly lost in the horrific typhoon Cobra in December of 1944 where 3 other naval ships sank resulting the deaths of 690 servicemen. The USS Anzio received eleven Navy Unit Commendations and nine battle stars for service in World War II. The Secretary of the Navy commended the men of Anzio "For outstanding heroism in action against enemy Japanese forces in the air, ashore and afloat."

George was promoted to ensign in September 1945 shortly before his discharge. Using the benefits of the GI Bill, George studied aeronautical and mechanical engineering at University of Minnesota, graduating in 1947. Once again jobs were scarce in Duluth after the war but George found employment as draftsman at USS Duluth Works. George worked his way up the ladder and in 1963 was promoted to Chief Engineer of the Duluth Works. The decline of the U.S. steel industry and environment issues at the site resulted in closure of the Duluth Works in 1972. Fortunately, George found a job with USS at their central engineering office in Pittsburgh, PA where he remained until he retired in 1983.

George married Sophie Theodoropoulos in 1950 and was the father of five children and 10 grandchildren. Dad was a quiet, kind, calm, precise and humble man who rarely talked about himself which makes this biography even harder to write. In his younger years dad enjoyed reaching out to the youth and was active with the Junior Achievement Organization and teaching the senior-level Sunday school class. He was very dedicated to his wife and family, even during turbulent times of unemployment and when Sophie had a massive stroke and impairment issues. Dad was very devoted to his country and especially to his faith in Jesus Christ and the Orthodox Church. On November 1st 2005, Dad passed away quite suddenly but peacefully. Dad impacted many lives especially his family and we are truly grateful for his steadfast and loving presence in our lives.