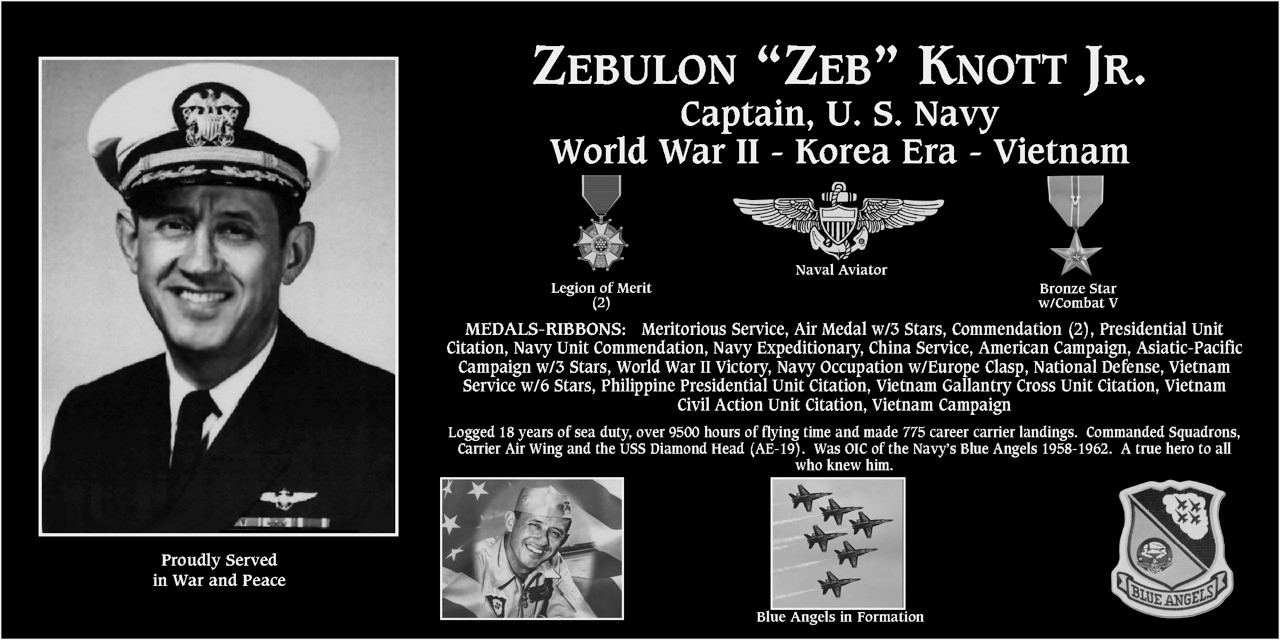 One of the most fortunate days of my life was 25 Dec. 1955. After finishing flight training in 11 months at Pensacola, Fla.

I was given orders to VF-173 an FJ-3 Fury squadron at NAS Jacksonville, Fla. On Christmas day I was welcomed by Lt. Cdr.

Zeb Knott. He was acknowledged by all the air group commanders and pilots to be the best pilot in the U.S. Navy. The good

news was that he made me his wingman and taught me more Naval aviation than I could have learned elsewhere: 1. Landing

after a flame out. 2. Fly close formation as a wingman 3. Fan break with 2 to 4 planes on return from a hop. 4. File flight

plans on cross country hops. 5. Fly on instruments. 6. Importance of being on time. 7. Enjoy the time off duty.

VF-173 was receiving the new FJ-3 Fury and the Sidewinder missile which gave us complete air superiority world wide. At

At the time no other Air Force, Marine or Navy squadron had the Sidewinder. VF-173 became the 911 squadron for the

Zeb took me with him to Chincoteague, Va. (the Navy missile test site) for a one week course in learning how the Sidewinder

worked and taught us how use it to destroy a Regulus missile.

President Eisenhower wanted to see the Sidewinder in action. 60 miles off the Jacksonville coast the President was on a big

Cruiser and we shot down a Regulus missile abreast the Cruiser at 500 feet altitude..

Someone higher up in the military echelon wanted to see how the Sidewinder worked in sub zero weather. Zeb and I were

sent to the Arctic on the carrier, USS Randolph. When getting ready to man our planes on the hangar deck, a safety officer

gave us flight suits to wear that were so big and clumsy that we had difficulty getting into the cockpit. I questioned the safety

officer as to why we were wearing bulging flight suits. His reply: “If one of you birds ends up in the drink up here in the arctic,

it will keep you alive for 2 minutes” !!! The Sidewinder worked very well in the arctic. It took the Russians 16 years to figure

out how the Sidewinder worked.

On the Saturday before Easter Sunday 1957 Zeb asked me if I would like to do a 5 AM flight on Easter morning. My reply was

a strong yes. We took off precisely at 5 AM and climbed to 35,000 feet and did a Cross over Jacksonville in the contrail level.

We then headed south to Miami out of the contrail level. When over Miami we went to 35,000 feet and did another Cross

and then went into a straight dive at full throttle until we broke the sound barrier. We then pulled up and returned to NAS

Jacksonville. It was reported later that day by a local radio station in Miami that a number of people in Miami were awakened

at 5:45AM for the “early” Easter church services.

In 1958 VF-173 made plans to have a party for the 4 squadrons in the air group and the Commander of the Air Group(CAG).

Zeb took four of us to Guantanamo Bay, Cuba with empty ammunition storage compartments. We purchased for .25 cents

apiece at the commissary the best wine, superb champagne and premium Canadian liquor. We filled up the ammunition

compartments with all we had purchased. We returned to NAS Jacksonville at 30,000 feet and landed. As we approached the

hangar parking area, we noticed the enlisted attendants had strange stares on their faces. They were focused on the nose of

each of the planes where the ammunition compartments were located only to see massive dripping of wine, champagne and

liquor on to the pavement. The high altitude had popped the corks of the libations we had purchased in Guantanamo.