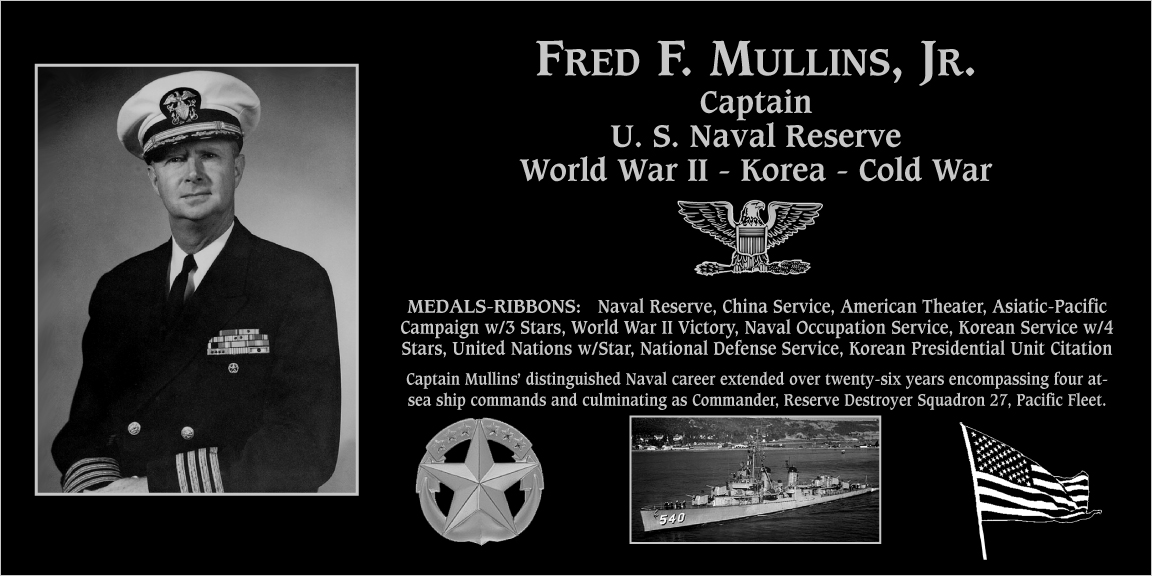 Fred Ferguson Mullins Jr., was born Sept. 13, 1919, in Helena, Alabama, and lived there until joining the U.S. Navy. He attended Midshipman School at Northwestern University in Chicago and was commissioned an Ensign, USNR, in 1941.

His first ship was the USS Cuyama (AO-3), followed by many others, notably the USS Whippet (IX-129), which he joined as XO in January, 1944, becoming the CO in May 1944, as a 24 year old lieutenant. Mullins commanded the Whippet through the World War II Pacific campaigns for the Marianas, Palau, the Philippines, and then to Kerama Retto, fueling ships while under Kamikaze attack during the Okinawa landings. USS Whippet earned two battle stars under his command. As the war ended, he took command of the USS Supply (AVS-1), decommissioning her at Suisun Bay in 1945.

While assigned to USS Cuyama, Mullins was sent on temporary duty for 30 days to USS Monaghan (DD-354) for gunnery training. Completing that training in November, 1941, he took 30 days leave. During that leave he visited friends in San Pedro, California, and met Josephine Hope Lansdowne. They dated and planned to request a leave extension in December 1941, but decided it wasn’t the right thing to do and Mullins returned to the Cuyama on Dec. 6. World War II interfered, but it couldn’t keep the young couple apart and they were married in 1943, remaining “shipmates” for nearly 50 years.

After WWII ended, Mullins attended the University of Alabama, while continuing to drill with the Naval Reserve. After receiving his degree, he served as Inspector Instructor for the Naval Reserve in Birmingham, AL.

Mullins volunteered for destroyer duty for the Korean War and served as XO of the USS Porterfield (DD-682) (two battle stars). During one engagement with Korean shore batteries, incoming fire destroyed the Porterfield’s radio shack. Following the war, he reported for shore duty in Charleston, South Carolina, as the Director of Training for the 6th Naval District Reserve.

In 1956, Mullins moved with his family, now increased by a son, Fred L. Mullins, and a daughter, Mende A. Mullins, to Coronado, CA. There he served as XO of the USS Dixie (AD-14), then CO of the USS Hooper Island (ARG-17) and finally CO of the USS Klondike (AD/AR-22). His final Navy tour was as Commodore of Reserve Destroyer Squadron 27 (ResDesRon 27), homeported in Coronado and responsible for twelve destroyers, spread from San Diego to Seattle.

Captain Mullins, USNR, retired from the Navy in 1967 with over 26 years of service.

For many years, Mullins was deeply involved in the community of Coronado, CA. Fred and Jo Mullins joined St Paul’s United Methodist Church soon after arriving in Coronado and remained very active there. He was a member of the Masonic Lodge and worked with the Job’s Daughters with Jo and Mende Mullins. He was in the Lion’s Club for a few years before joining Rotary in 1969, remaining an active member for 50 years. Mullins was a member of the Navy League and was on the Board of Directors for the San Diego Historical Society for several years Captain Fred F. Mullins, USNR, passed away in July of 2020, bringing to a close a long and abundant life of faithful service to God, his family, and his country.