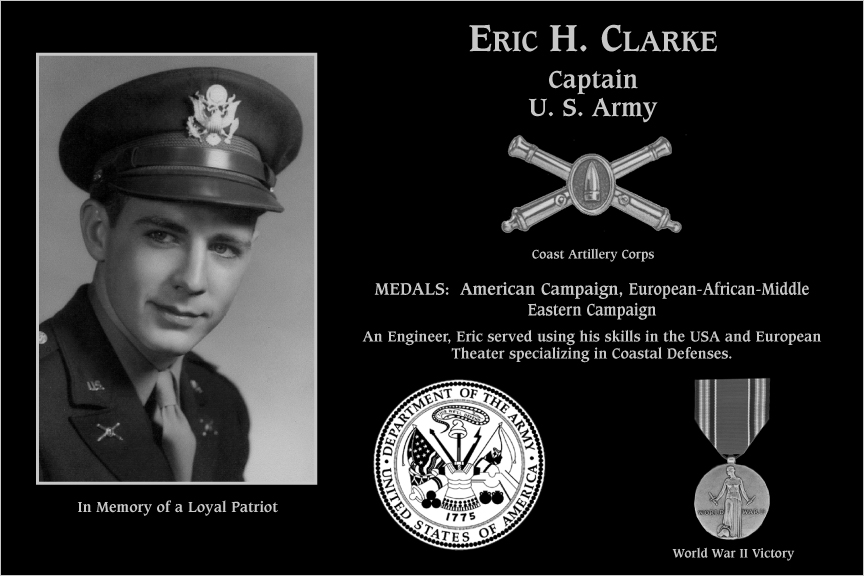 There are a few things about Eric (“Rick”) Clarke that everyone who knew him would recognize. His strength of character, selflessness, and kindness are unsurpassed by anyone. His faith in God was unshakeable. One of his favorite expressions was, “The man upstairs really likes me”. Another trait that all would agree on is his sense of fun. Nobody worked harder than him at having a great time, all the time. Finally, all who knew him would agree that there has never been a more dedicated husband, father, grandfather, and great-grandfather.

Rick was born in Grand Rapids, Michigan on Sept. 15, 1921. He was the second surviving child of H.E.G. and Grace Clarke. He grew up with an older sister, Joyce, younger brothers Jack, Lex, and Bill, and younger sister, Pat. The family moved to Plymouth, Indiana when Rick was in high school where he graduated from Plymouth High School. He went on to Purdue University where he spent his first year of college. When World War II started, he enlisted in the Army, and by the end of the war was a Captain in the Army Corp of Engineers. After the war he returned to Purdue and finished his B.S. degree in Mechanical Engineering.

Before he left for the Army he married the love of his life. They met at a dance at Camp Lake in Sparta, Michigan where his family had a vacation cottage. Esther Heiss lived nearby in Cedar Springs, Michigan. He told her that night that he was going to marry her. He obviously meant what he said because they were married on July 12, 1942 and spent most of their 65 years together dancing.

While Rick was in the Army stationed in Riverside, California, their first child, Susan, was born in Cedar Springs. Esther packed up the newborn and traveled by train across the country to meet him in California. She followed him around the U.S. for the rest of his Army career. Once he went back to Purdue their second child, Debbie, was born.

After graduating from Purdue, Rick worked for RCA Victor. Their youngest, Emily, was born while he worked for Stewart Warner in Indianapolis, Indiana. Rick then worked for Lear in Grand Rapids, Michigan, and in Santa Monica, California. He later worked for Garrett AiResearch in Torrance, California, where he was employed until he retired in 1986. He was a member of the Professional Engineers Association and was published in Who’s Who.

While in Indianapolis, Rick and Esther met their best friends, Don and Virginia Wilson, and began a friendship that lasted for over 50 years. When Lear moved Rick and his family to California in 1957, the Wilsons soon followed and lived with the Clarkes until they found a home. That friendship also brought along a business relationship when Hasa Pool Chemicals was founded by Don, and Rick became a part time business partner with the new company. After over 40 years with Hasa, countless trips to exciting locations with the company, parties too numerous to tell about, family camping trips and so much shared history, the relationship of the Clarke and Wilson families is a bond that is a rare and wonderful thing.

The Clarkes settled in San Pedro, California where Rick quickly became involved in the First Presbyterian Church and the Los Angeles Harbor Masonic Lodge where he was a Past Master and had the honor of receiving The Hiram Service Award. He was a member of the Al Malaikah Shrine, the Order of Eastern Star, and the Elks Lodge, and was a past president of the Harbor Shrine Club.

Along the way Rick and Esther built a cabin in the mountains of California and a cottage on Hess Lake in Michigan. They wanted their family to stay close to each other and to all the Michigan and Indiana family. The fun and meaningful times in the past and future at these homes were a huge gift to his family.

As Rick’s health failed in his remaining years his true character always shone forth. He was a gentleman even when things were difficult or frustrating. He never stopped showing his great love for Esther, his daughters, sons-in-law, and grandchildren. The sweet kisses from his great grandchildren and young nieces and nephews meant the world to him. Rick passed away on July 2, 2007 in Newaygo, Michigan. He is greatly missed by all who knew him.