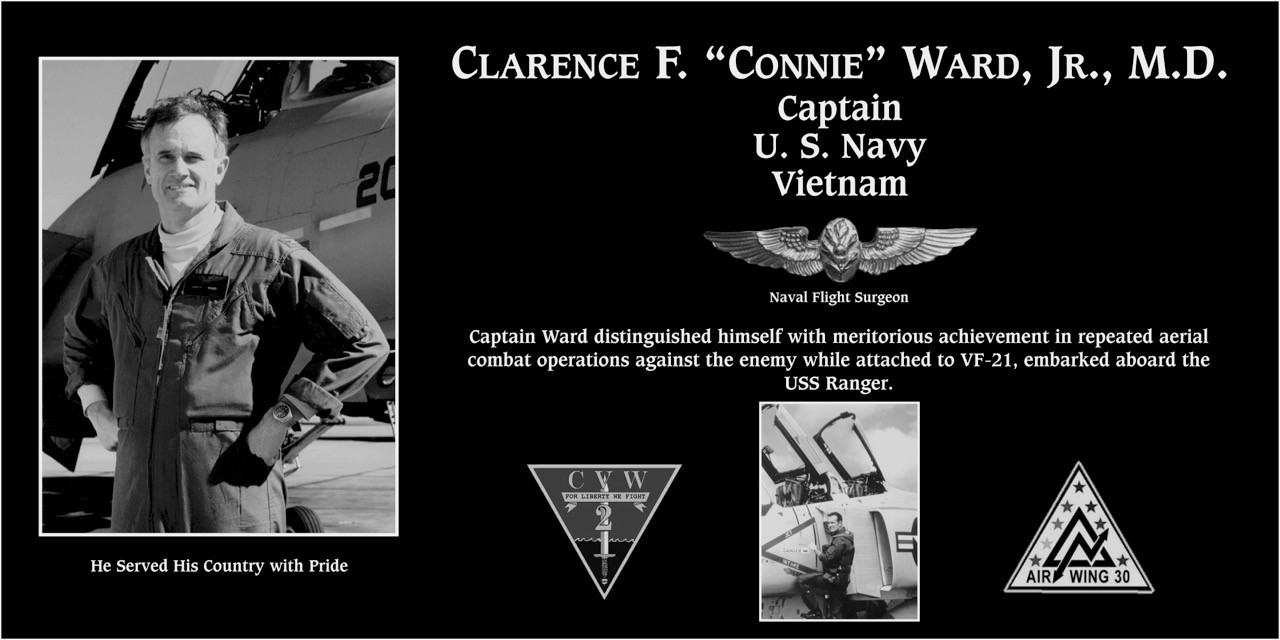 Clarence Fenimore (Connie) Ward, Jr. was born July 14, 1944 in Portsmouth, VA, where he lived throughout his childhood.

He spent the summers of 1967 and 1968 on Active Duty with the US Navy as part of the 1915 Program. He attended UVA for both undergrad and medical school, graduating from medical school in 1969, shortly after marrying Gretchen in May of that year.

His internship year was spent at Portsmouth Naval Hospital from July of 1969 thru June of 1970. He was then on the USS Enterprise while it was in port at Norfolk before leaving for Pensacola in September of 1970. There he completed his Flight Surgeon Training, having already obtained his private pilots license in 1965. Flying was truly in his blood from the start. He continued flying private planes into the 1990s, and even tried his hand at flying gliders late into his 60s.

After he completed his training at Pensacola, graduating #1 in his class, he and Gretchen arrived in San Diego in the spring of 1971. He was shortly thereafter sent to the USS Kitty Hawk off the coast of Southeast Asia. Following that deployment he joined CAG 2 and deployed on the USS Ranger from 1972-1973. His deployments to both carriers were officially as a Flight Surgeon/Medical Officer, but he also taught himself how to be the Radar Intercept Officer (RIO) of the F-4 – simply by reading books and spending time in the simulator. He flew as a RIO in a number of sorties during his time on the carriers in the Vietnam War and was the first aviator in his Air Wing to earn an Air Medal.

He then returned to San Diego, where he was stationed at Miramar Naval Air Station as part of the USNR and decided to pursue an Anesthesiology residency at UCSD. His residency rotations included 3 months at SickKids in Toronto and 3 months at San Francisco General in the ICU. After completing his residency, he received a staff position at UCSD as an Anesthesiologist and Clinical Professor.

Throughout his Anesthesia career he continued flying in the Navy Reserves and transitioned with his Air Wing from the F-4 to the F-14. Any opportunity to fly, he gladly took.

In addition to his work in clinical anesthesia, he researched and published on impaired physicians and the risk of drug addiction in anesthesia. Connie continued his work with impaired physicians his entire career, helping colleagues with interventions, placement in rehab, and a progression back into the workforce. He spoke on this subject, along with a multitude of others, at medical conferences around the world. His lectures were always well attended, as they were not only educational, but also filled with his characteristic wit and dry humor.

He left UCSD in 1989 and began working in private practice at Scripps Green Hospital in La Jolla. Connie retired from the USNR as a Captain in 1995, and retired from practicing as an Anesthesiologist in 2013.

In addition to his career in medicine and the US Navy, he also enjoyed SCUBA diving, which he started in high school and continued late in to life. As with everything he pursued, he excelled and obtained multiple diving certifications.

Above all, Connie was a loving father, husband, and grandfather. He always made sure his family knew they were loved and that he was proud of them. Connie passed away October 20, 2018, with his wife Gretchen and 3 daughters Tracy, Lynn and Diane at his bedside.