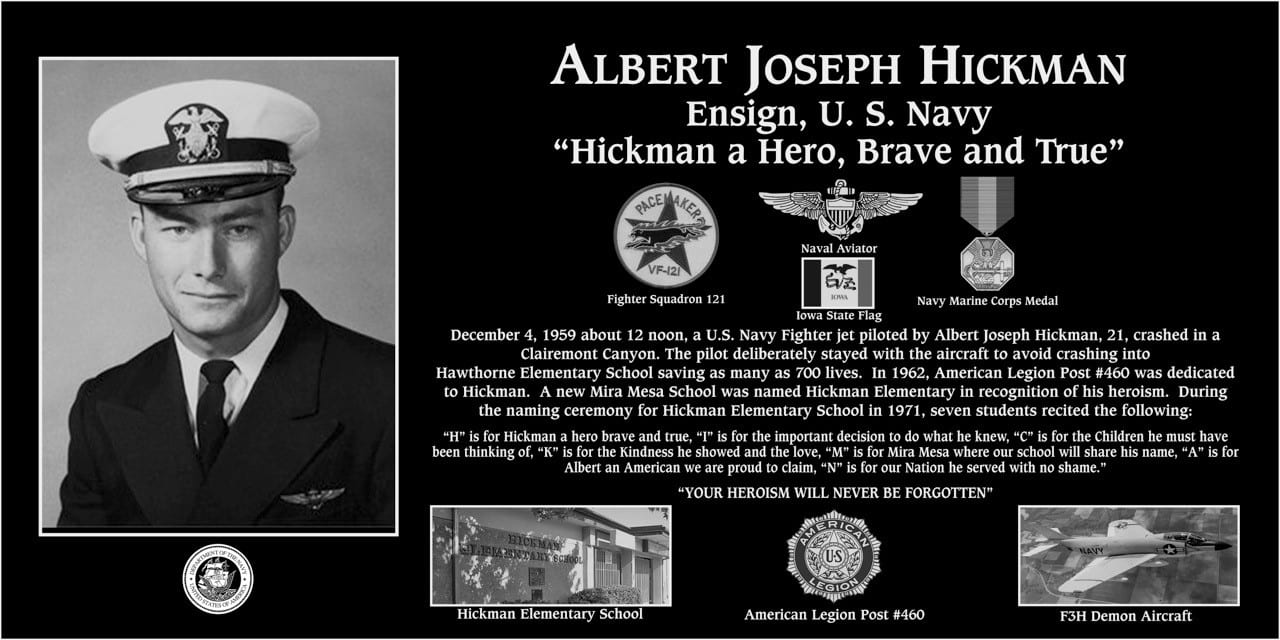 A ceremony has been set for Saturday to honor a Navy pilot and Sioux City native who died in a 1959 plane crash in California, reportedly saving the lives of hundreds of grade-school students in the process. According to a press release, a Veterans Honor Ceremony for Ensign Albert Joseph Hickman has been set for 10 a.m. Saturday at Mt. Soledad National Veterans Memorial, 6905 La Jolla Scenic Drive South, La Jolla, California. The event commemorates the 60th anniversary of the crash.

Hickman (born Hickmon, the name changed due to a Navy clerical error), was 21 years old when he was killed Dec. 4, 1959, piloting a U.S. Navy F3H Demon that crashed into a canyon at Clairemont, San Diego, after its engine stalled.

Rather than parachuting out of the airplane, Hickman stayed aboard to avoid crashing it into the nearby Hawthorne Elementary School, saving potentially 700 lives. The plane crashed not far from the school. Hickman was posthumously awarded the Navy and Marine Corp Medal, and in 1962, American Legion Post #460 in Kearny Mesa, San Diego, was dedicated to him.  A new elementary school in Mira Mesa, San Diego, was named Hickman Elementary in his honor, as was an athletic complex in Kearny Mesa.  Principals from both the Hawthorn and Hickman Elementary Schools and survivor Debra Dawson will speak at the event.

SAN DIEGO — A Navy pilot who sacrificed himself to save nearly 700 people 60 years ago was honored during a ceremony Saturday morning, September 21, 2019.

A plaque commemorating Ensign Albert Joseph Hickman was added to the Mt. Soledad National Veterans Memorial. Hickman was 21 years old when the F3H Demon he was piloting malfunctioned and began going down near Nathaniel Hawthorne Elementary School on December 4, 1959.

Instead of ejecting, Hickman stayed with the aircraft and piloted it away from the school. He died in the crash but saved nearly 700 people, most of them children. Read more…

LA JOLLA (KUSI) – Navy Pilot Albert Hickman was remembered on Mount Soledad Saturday for saving the lives of over 700 people.

On December 4th, 1959, while trying to land his F3H Demon jet at what was then Miramar Naval Air Station, he began experiencing engine failure. When Hickman realized his jet was headed straight for Hawthorne Elementary School, where close to 700 kids were playing outside, he made the decision not to eject but instead stay in the cockpit to guide the jet away.

Debra Dawson was a third grader at the elementary school at the time, and came from Texas to pay her respects and give thanks.

“A 21-year-old had the wherewithal, the passion in his heart and heroism in his soul not to bail out,” says Dawson, “but to save a playground full of schoolchildren and teachers.”   Read more from KUSI….