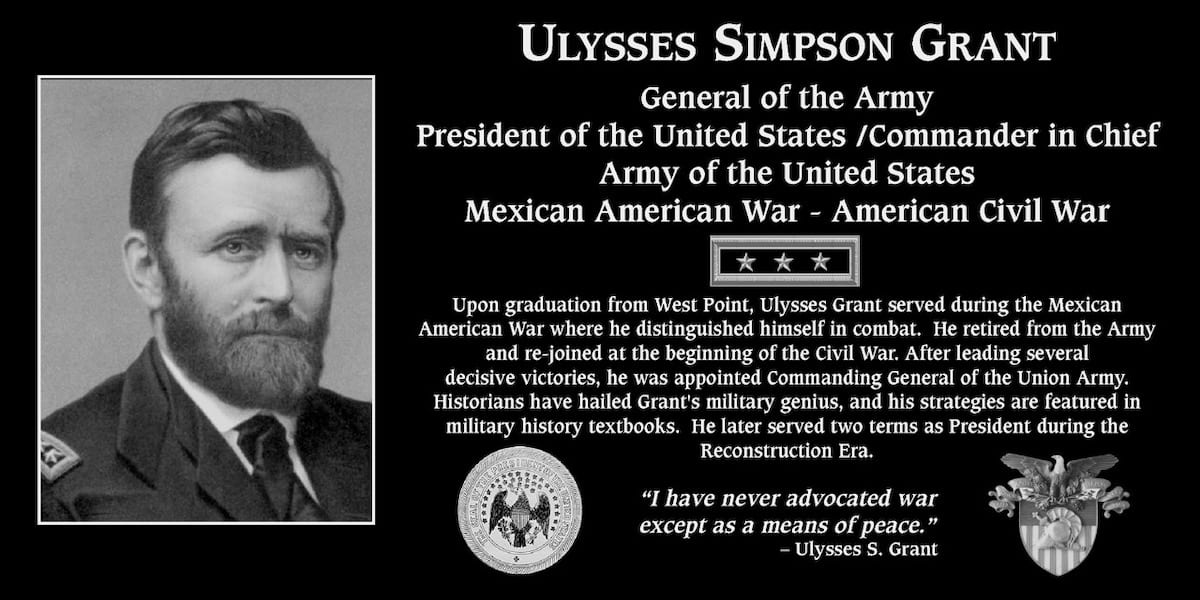 President Ulysses S. Grant became the United States’ 18th President in 1869. He served two terms until 1877, after which he decided to retire. Prior to the presidency, Grant led the Union army to victory over the Confederacy in the American Civil War in 1865. His military strategy, incomparable leadership, and heroic deeds during his service gave the American people hope for a fresh start post-war.

President Grant, born Hiram Ulysses Grant, was born in Point Pleasant, Ohio on April 27th, 1822. His father, Jesse Root Grant, was a humble tanner and merchant. His family served in many wars. His great grandfather served in the French and Indian War and his grandfather served in the American Revolution. His father nominated Grant to enroll in West Point, also known as the United States Military Academy, because he knew that Grant did not want to be in the leather industry. Grant was a quiet small boy growing up, but had notable skills in writing, reading, mathematics, and horsemanship. Upon graduation, he was assigned to an infantry company in Missouri, which then moved down South to fight in the Mexican War. He fought in the Mexican War from 1846 to 1848 and displayed two counts of bravery. After the war, in 1854, he experienced a bout of alcoholism and resigned from the army. William McFeely, an American historian and Pulitzer prize winner, claims that Grant left because he was “profoundly depressed”, and that his alcohol consumption remains elusive to this day. After his resignation, Grant struggled to find fulfilling work. He worked several varying jobs before returning to his father’s robust leatherworking business in Galena, Illinois.

Grant During the Civil War

Grant’s military strategy and leadership talents were heavily recognized during the Civil War. At first, he was denied recommission to join the army in 1861. For two years he worked as a volunteer and quickly rose to the ranks of brigadier general of volunteers. He later earned wide praise and respect by claiming victory in almost every battle he led.

President Lincoln recognized his thirst for victory and officially promoted Grant within the Union Army as a major general in 1863, then later as lieutenant general. This position gave him command of the entire Union Army. The only person to have that rank was none other than George Washington. From there, Grant lead the Union Army to victory in Chattanooga, the Overland Campaign, the Battle of Cold Harbor, the Siege of Petersburg, and the Appomattox campaign where Robert E. Lee surrendered.

Shortly after the decisive Union victory, President Lincoln was assassinated by John Wilkes Booth. Andrew Johnson was sworn in and received Grant’s support.

Throughout his two terms, President Grant fought for the rights of African Americans, Jewish people, Native Americans, and women. He believed in the ratification of the Fifteenth Amendment, which granted all citizens the right to vote, regardless of race, sex, or servitude. He was a man of the people who pursued peace and balance in a time where wars and battles were fresh in people’s minds. He believed in seeing the best of people, which ended up hurting his presidency more than helping. He remained loyal to the people he trusted during his time at war and ignored the advice of Republican leaders. While the strategy worked in his favor in some respects, a few members in his cabinet were associated with scandals and tarnished his reputation due to his inability to dissociate from them.

After his presidency, he faced financial ruin after a series of scandals and being diagnosed with throat cancer. He wanted his family in safe hands after his death, so he wrote a memoir about his life in the military as a high-ranking military leader. He completed it mere days before his death. With the help of Mark Twain, the book was largely successful, and President Grant’s family was supported with $450,000 in book sales. This is close to thirteen million dollars today! President Grant was an honorable president and serviceman. He knew when to play his cards and refused to deal a bad hand. He believed in people when no one else would and saw the good despite facing the worst. He was an American Hero by all definition and established a strong foundation for America.

Check out his plaque and many others at Mt. Soledad National Veterans Memorial. Open Daily, 7-10pm.

Posted In - Honored Veterans, US Presidents