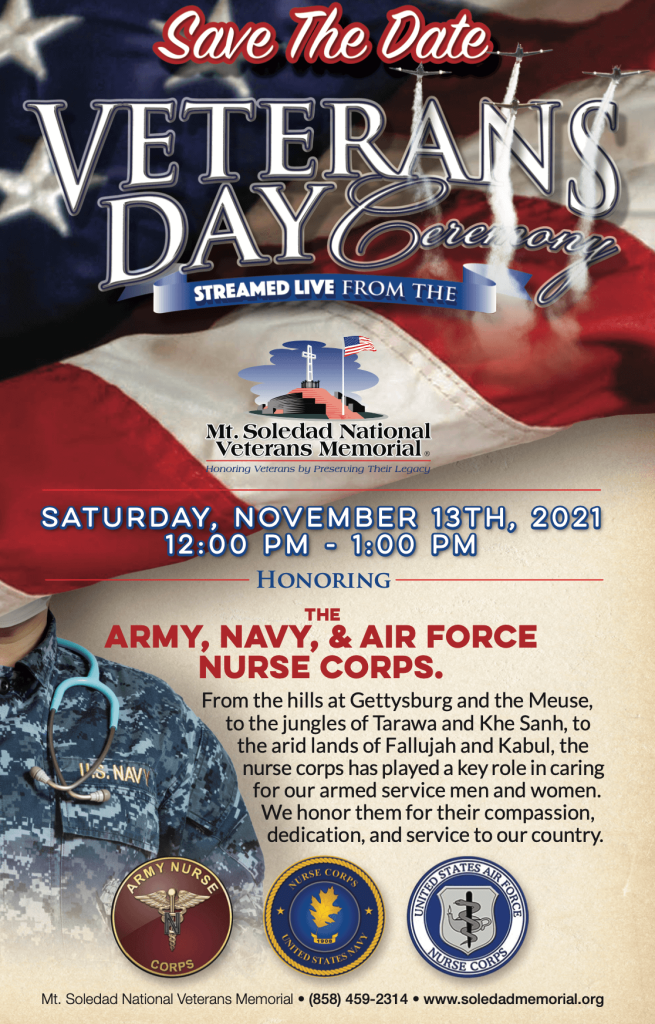 SAN DIEGO (Oct 13, 2021) – The Mt. Soledad National Veterans Memorial will honor the Army, Navy, and Air Force Nurse Corps through a live/in-person and virtual tribute event on 13 November 2021 from 12 p.m. to 1 p.m. (PDT) streamed at: www.veteransdaylive.org.

Our Keynote Speaker is Rear Admiral Cynthia A. Kuehner, the Commander of Naval Medical Forces Support Command and Senior Nurse in the United States Navy. She previously served with the 1st Force Service Support Group in Fallujah, Iraq, providing direct casualty care during the height of combat operations at the busiest role II medical facility, in support of Operation Iraqi Freedom and the first battle of Fallujah. She also served as the senior medical officer, and ultimately as the executive officer, of the Provincial Reconstruction Team in Khost, Afghanistan. As the team’s provincial partner for health sector development, she worked with Afghan government officials, U.S. departments, and non-government organizations to bolster reconstruction efforts essential to the counterinsurgency strategy, in support of Operation Enduring Freedom (OEF).

“From the hills at Gettysburg and the Meuse, to the jungles of Tarawa and Khe Sanh, to the arid lands of Fallujah and Kabul, the Nurse Corps has played a key role in caring for our armed service men and women. We honor them for their compassion, dedication, and service to our country,” stated Phil Kendro, Vice President of the Mt Soledad Memorial Association.

The live and online commemoration will be again hosted by National University’s Director of Public Safety Outreach, and former News Anchor, Marc Bailey. There will be musical performances by Marine Band San Diego and Sharp Memorial Nurse Keena Mapanao, and flybys by the San Diego Salute Formation Team.

The Mt. Soledad National Veterans Memorial is one of the most unique veterans’ memorials in the Nation and stands high on La Jolla’s Mt. Soledad, offering panoramic views of San Diego County. It is the only Memorial that honors veterans, living or deceased, from the Revolutionary War to the current war on terrorism, with an image of the veteran. More than 5,200 individual veteran tributes, embedded on black granite plaques, are mounted onto 11 curved walls honoring our United States veterans.