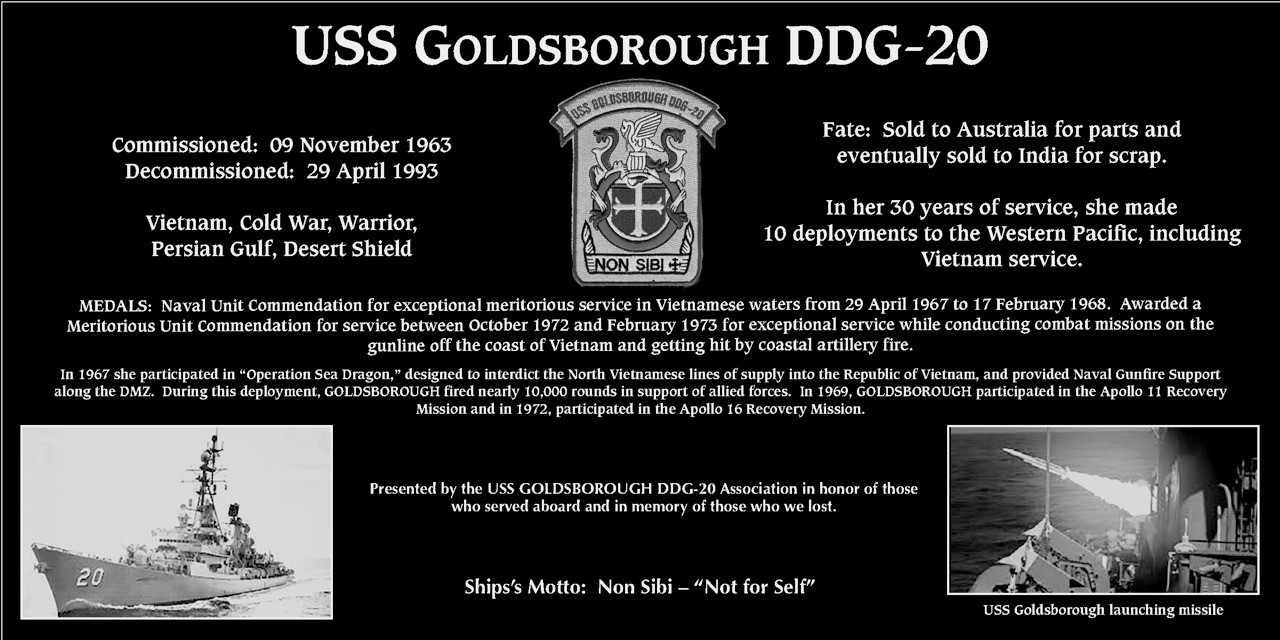 The USS GOLDSBOROUGH DDG 20, was built by the Puget Sound Bridge and Drydock Company in Seattle, Washington, and was commissioned at Puget Sound Naval Shipyard, Bremerton, Washington on 9 November 1963, Captain Charles D. Allen Jr., in command. The ship was sponsored by Mrs. Alan Bible, wife of U.S. Senator Bible of Nevada.

After working up in the Puget Sound area, she completed a series of port visits on the mainland, and arrived in her new home port of Pearl Harbor, Hawaii on 14 February 1964. Following qualification and acceptance tests in April, she sailed for Sydney, Australia for the Coral Sea celebration and returned to Hawaii in June.

GOLDSBOROUGH got underway in late November for Yokosuka, Japan and her first WestPac deployment with the Seventh Fleet. In February 1966 GOLDSBOROUGH made a second deployment to the Orient. She provided gunfire support for Operation “Binh Phu I” firing nearly 600 rounds. GOLDSBOROUGH also screened attack carriers on Yankee Station in the South China Sea. She participated in SEATO exercises in May, and was station ship at Hong Kong in June. On 26 June she was again off Vietnam on picket station. The ship returned to Pearl Harbor on 23 July.

In August 1966, GOLDSBOROUGH entered the Pearl Harbor Naval Shipyard for overhaul and extensive modification. In 1967 she participated in “Operation Sea Dragon”, designed to interdict the North Vietnamese lines of supply into the Republic of Vietnam, and provided Naval Gunfire Support along the DMZ. During this deployment GOLDSBOROUGH fired nearly 10,000 rounds in support of allied forces and avoided over 800 rounds of hostile fire without damage to the ship. She was awarded the Naval Unit Commendation for exceptionally meritorious service in Vietnamese waters from 29 August 1967 to 17 February 1968 upon her return to Pearl.

In November 1968 GOLDSBOROUGH made her fourth Western Pacific deployment in five years, participating in eighty-eight gunfire missions in support of Vietnam, Republic of Korea, and U. S. Marine and Army forces.

In 1969 GOLDSBOROUGH participated in the Apollo 11 Recovery Mission. The command module “Columbia” splashed down about 200 nautical miles south of Johnston Island at 12:50 GMT July 24, 1969.

After a yard period in 1970, GOLDSBOROUGH made a fifth WestPac tour, departing Pearl in August and returning in February 1971. Again she provided Naval Gunfire Support for allied troops, and carried out carrier escort duties in the Gulf of Tonkin. Later that year she visited Portland, Oregon for the 1971 Rose Festival.

In early 1972 she was assigned to the recovery Task Force for Apollo 16. Departing again on 13 October 1972 for her seventh deployment to the Western Pacific, this would be her last trip to the “gunline” of Vietnam. In December, while conducting a combat mission GOLDSBOROUGH was hit by coastal artillery fire. The shore battery put a hole five feet wide through an upper deck. The ship’s crew received a Meritorious Unit Commendation for service between October 1972 and February 1973. The ship returned to Pearl Harbor in May 1973.

GOLDSBOROUGH underwent a major overhaul at Pearl in 1974. Her electronics and weapons systems were modernized, and she was fitted with a new type of sonar. Her boilers and generators were rebuilt as well. She was badly in need of this overhaul, being well worn from her repeated deployments to the Western Pacific.

During the 1980’s GOLDSBOROUGH participated in Persian Gulf operations, including contingency activity during the Iranian hostage crisis. She conducted maritime escort duties during the Iran / Iraq war, escorting Kuwaiti oil tankers through the Persian Gulf. GOLDSBOROUGH was modernized extensively in 83-84 at Pearl Harbor. In 86 the ship was host of the CNO Adm. Watkins.

GOLDSBOROUGH completed her final forward deployment in October 1992 to Central America as part of a joint task force involved in counter-drug operations, setting the standard for joint aerial and surface detection and monitoring operations.

GOLDSBOROUGH was decommissioned and stricken from the Naval Vessels Register on 29 April 1993. She was sold to Australia as a parts bulk in September the same year.