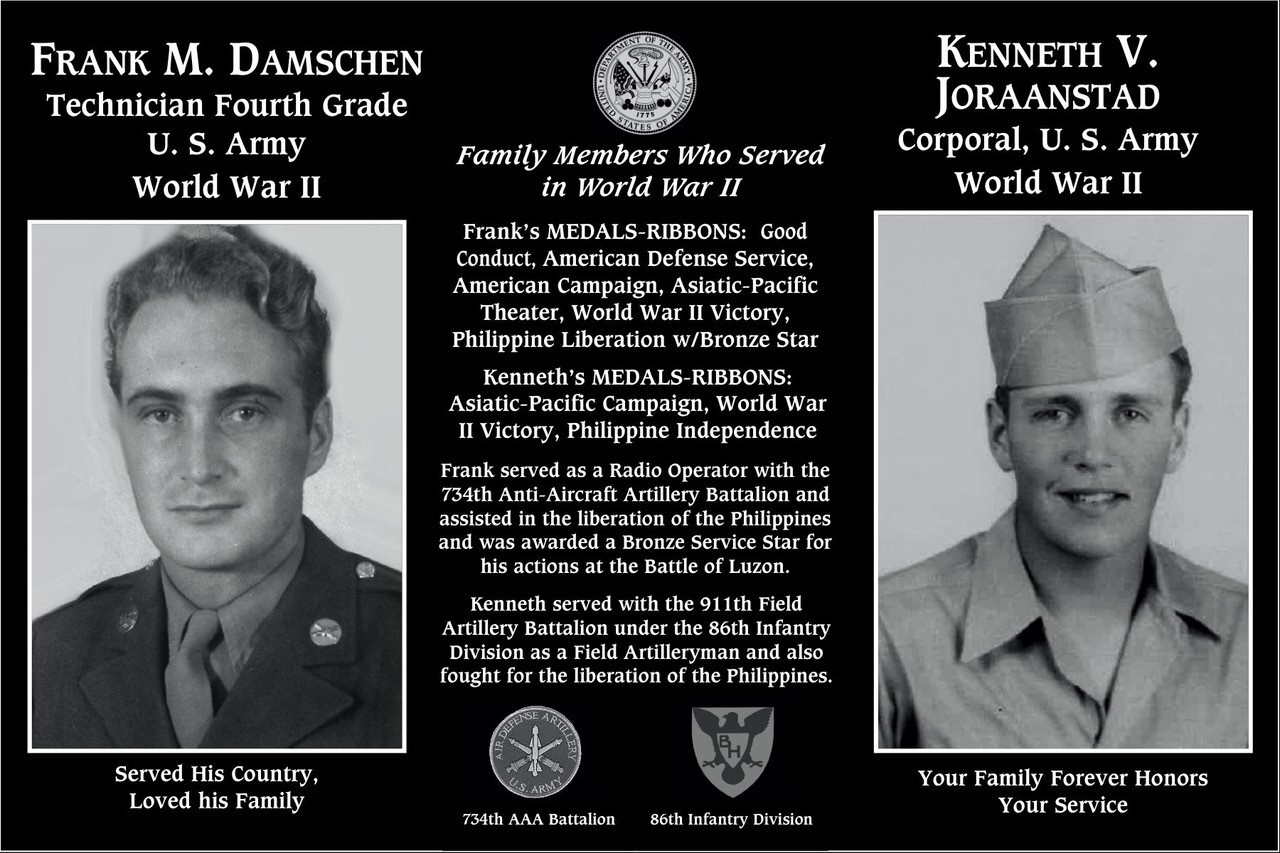 Frank Marvin Damschen was born on September 1, 1918 at Pelican Rapids MN, the son of Charles R. and Cecilia (Hosterman) Damschen. His mother died when Frank was 18 months old and he was raised by aunts and uncles in Pelican Rapids, MN and attended country school. At age 9, Frank moved to Hampden, ND to live with his father and step-mother. He continued his education at Hampden Public School and graduated from Hampden High School in 1936. After graduating from high school, Frank lived and worked in California for a time then returned to North Dakota and worked with his Dad at the Damschen Grocery Store.

Frank entered the United States Army at Fort Snelling MN on July 9, 1941 and served his country during World War II. He served with Battery A, 734th AAA Gun Battalion as a Radar Operator in the Asiatic Pacific Theater, Philippines, Peru and New Guinea. He fought in the Battle of Luzon and received a Bronze Service Star for his actions. He was also awarded the American Defense and American Theater Service Medal, Philippine Liberation Medal, Good Conduct Medal, Marksman award and Victory Medal. After Frank’s honorable discharge on December 24, 1945 at Fort Lewis WA he returned to Hampden and again worked with his Dad at the store.

Frank was stationed in the South Pacific near the end of WWII after being away from his family and his soon-to-be bride for over 4 years. He and Dorothy weren't married yet, but they had been writing letters the whole time he was away. Dorothy had just graduated from high school and mailed her senior portrait to him. True to his tenderheartedness and creative ingenuity, Frank made a frame for her picture using some metal and a piece of windshield from a crashed plane he found in the jungle and kept it beside his cot. He and Dorothy were married in 1946 shortly after Frank got home and were married for over 65 years.

They lived, farmed and ranched and raised their family through the years at rural Hampden. Frank turned the farming operation over to his son in the fall of 1979, but it certainly did not mean retirement. Frank was still running the combine at age 90 plus.

Frank had a special talent in mechanics and as an inventor. All these talents were especially useful on the farm. As a Senior in high school, Frank and his friend built an airplane whose first flight was over the city of Hampden. If you couldn’t find the part you needed or there was a way to make something more efficient, Frank was the go to man.

Music was a very important part of Frank’s life. He played many instruments-all by ear- including the guitar, banjo, accordion, harmonica, etc. Frank also had a deep personal faith and love for the Lord.