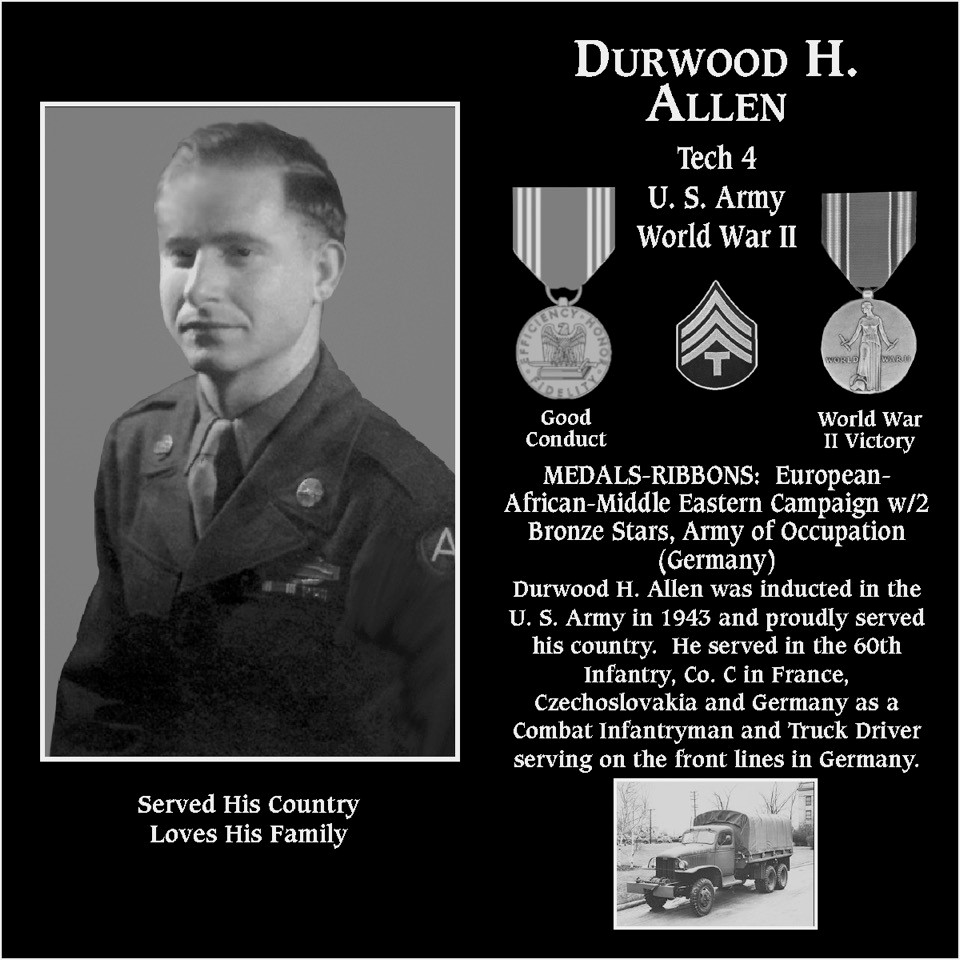 Durwood Allen was born on August 16, 1925, in Memphis, Texas, to Joseph Grayson Allen and Cora Catherine Allen. He grew up in East Texas in the community of Stewards Mill, where his family lived in the Bradley plantation home and he attended school in Fairfield. They later moved to Kirvin where he finished high school. He had a sister and a brother, three half brothers, and one half sister. He has always been known by the nickname, “ Red.”

He entered the United States military on Nov. 27, 1943, in Fairfield, Texas. He was sent to Dallas to the Induction Center where he received his physical, chose Army as his branch of service, and was sworn in. He was sent to the Mineral Wells Induction Center where he was assigned to the kitchen. While there, he was told that he would be going in to the infantry. He was put on a bus to Camp Fannin, Texas, near Tyler, Texas, where he underwent basic infantry training. While there, he suffered from severe pneumonia and a broken ankle, both which required a stay of several weeks in the hospital.

From there, he was sent to France to Cherbourg Beach, near Normandy. From there he was sent to Germany and assigned to the 9th Division 60th Infantry – the “Go Devils”. He spent time there in combat in the winter, with temperatures in the mountains 30-40 degrees below zero. Many soldiers, including him, suffered frozen feet, legs, arms, and hands, while engaging in combat in the Black or Hurricane Forest. He was sent from the first aid station to a hospital in Belgium. He spent approximately three weeks there, thawing out by an open window in the mountains. He was sent to Paris, France, to see some other doctors and then sent to England to the hospital at the United States air base. He recuperated there for six months, at which time the fighting ceased. He was then returned to his old unit in Germany. While there, his unit spent time guarding several strategic places such as a group of German nurses, who were prisoners and living in a school, a steel plant, a burial site of civilians where the grave was being excavated, and Dachau Concentration Camp, where he arrived on the third day after liberation. Occupation began and he was transferred into the 2nd Army, 3rd Special Service Company B under General Patton. He was involved in various duties, as new recruits were coming in and others were going home, so duties changed often.

He was first assigned to the kitchen as a Tech. 4, first cook. He was relieved of that duty when another section took over the kitchen duties. He drove USO personnel in a converted ambulance. He managed the hotel where they were living. He drove a coal fuel truck. He transported the 3rd Special Service report weekly to Nuremberg, to General Patton’s office. He was assigned to the motor pool as a 2 1/2 ton truck driver.

After returning to Houston, he worked at various jobs in bakeries and grocery stores for about five years.

He survived the loss of two wives: Doris Allen and Patsy Allen.

He resides in Livingston, Texas.

He is dedicated to family and friends and loved by all