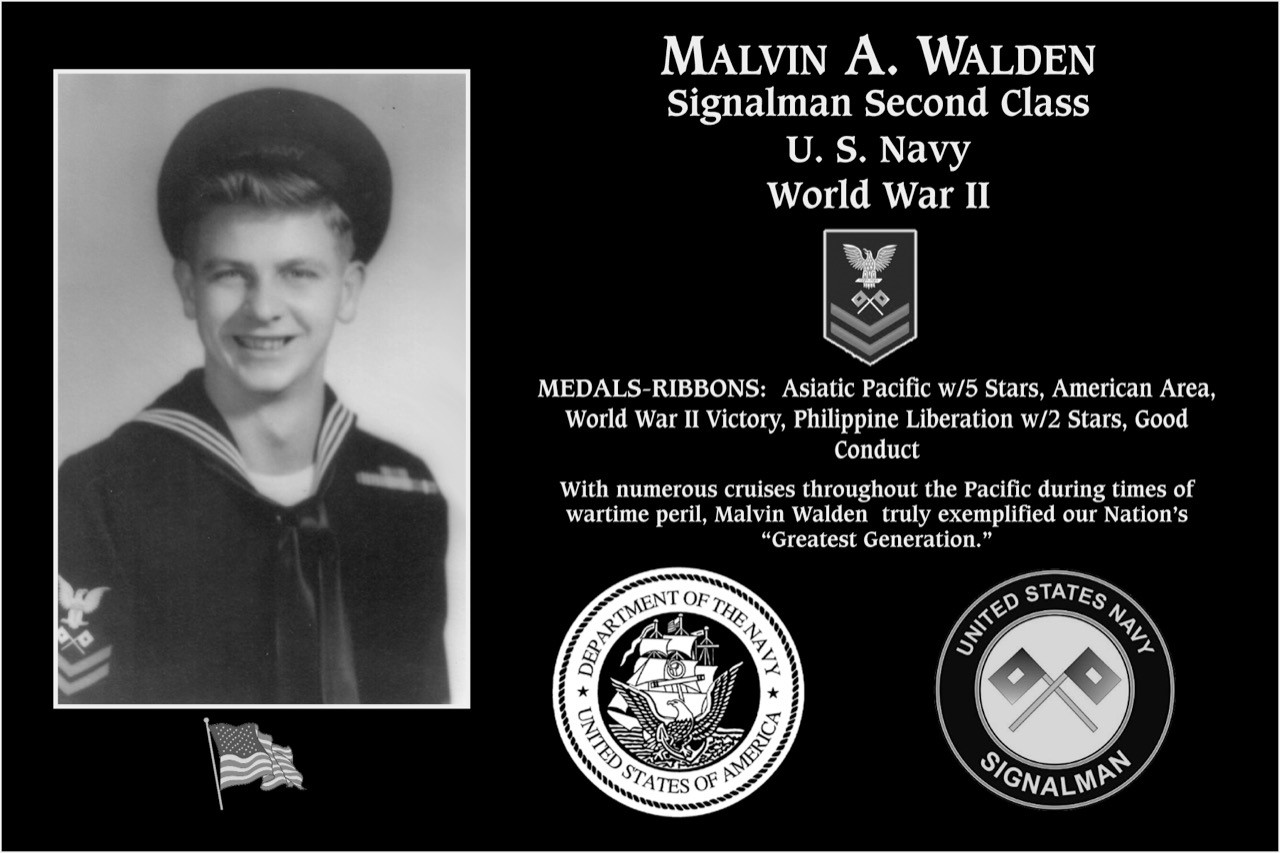 Thank you for coming to remember Mal's life with me today. I know he would be pleased to see everyone here today. He would want to be remembered happily by you.

Mal leaves a legacy of love and integrity. He has left behind wonderful memories of a loving husband, father, grandfather and great grandfather.

Malvin was born in Chicago, Illinois on September 6, 1925. Mal had four sisters and one brother. When he was nine years old, the family moved to New York, then to Philadelphia, then to Camden New Jersey.

Mal was 17 when he joined the Navy. On August 17, 1943 he was sent to basic training in Sampson New York for two months, then to San Diego and left for the South Pacific and served bravely on the USS Aquarius. He was also on the USS Harris, USS Crater, USS PCE 875.

Mal was a signalman second class.

Though Mal never talked much about his war experiences, he was very proud of his service and loyal to his country.

When Mal returned home from the Navy, he stayed in New Jersey for a while, then came to California.

He married, went to Glendale College for his diploma, then to UCLA then transferred to Cal Berkeley for his engineer degree.

Much later he received his MBA degree.

Mal had three children. Wendy, Andy and Holly. Wendy joined her father in heaven on October 22, 2019 - she was a wonderful daughter and I know the two of them are together, watching over us.

Mal was always proud of his children and he loved my kids as his own.

After about 20 years of marriage, Mal and his first wife divorced.

Then on November 17, 1969 I was introduced to Mal. We dated for five years, then married. I had three children. Linda Randy and Debbie. That gave us a blended family of six children. The good thing, they all got along!

We have 15 grandchildren. Mal loved having them over. He loved talking to the boys about things they wanted to learn about. Of course he loved his little girls.

We loved taking them to Sea World and Knott‘s Berry Farm. Annual passes were always given to them.

Also we had nine great grandchildren and they received passes to Legoland. He had as much fun being with them as they did going to the park.

Mal had a clever sense of humor. Above all, he loved and cherished his family.

He supported and loved us all, and was always there to help us navigate through life’s challenges.

Mal and I loved traveling the United States in our motor home. Some of our favorites were Yellowstone, Yosemite, Laughlin, Bullhead City and of course Lake Cachuma.

We took the grandchildren there, two or three at a time. It was so much fun. The boys loved fishing. One time we took Timmy and his cousin Evan and they had a great time. Evan caught his first fish, and Timmy even took the fish off the hook for him! That is just one of the great memories traveling with the grandkids.

Mal was the greatest husband you could have asked for. Great manners, understanding, he was on the quiet side, very compassionate, and had the patience of Job.

Mal passed away after 32 years of marriage on August 5, 2006 of bladder cancer.

I miss him more than words can express. But the happiness we shared will last a lifetime - Mal was my everything.