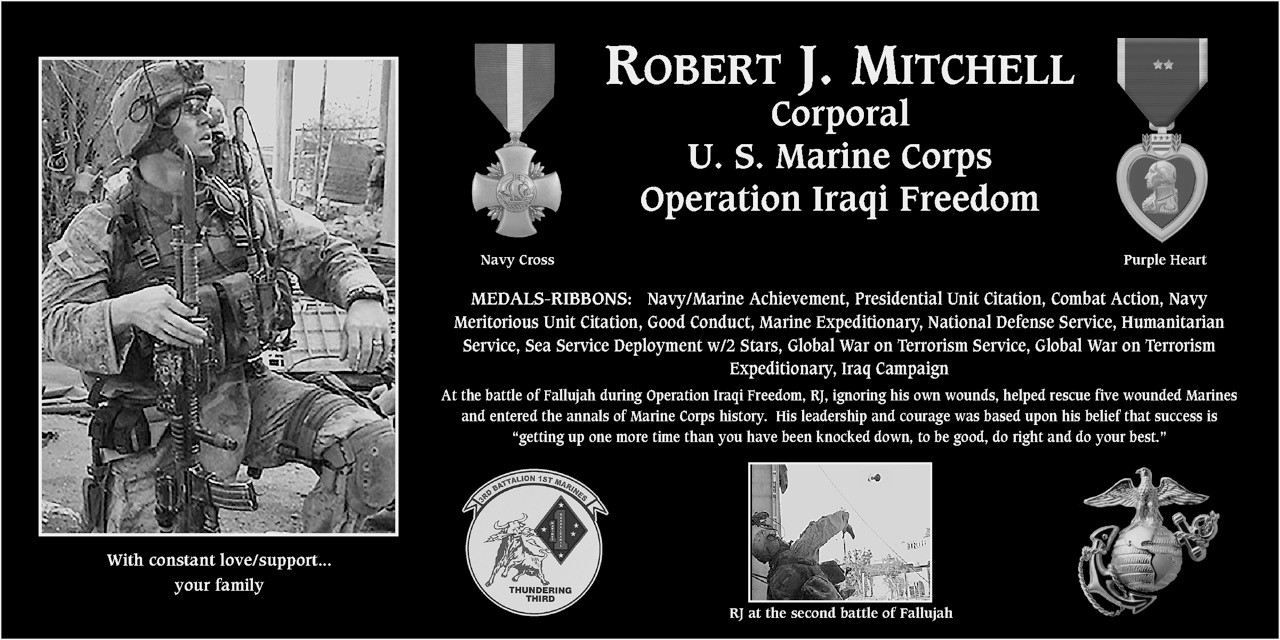 Sergeant R. J. Mitchell was born in Portland, Oregon on February 25, 1980. He graduated from Riverside Community High school, in Oakland, Iowa, and enlisted in the Marine Corps on February 12, 2001. Upon completing his basic training at MCRD San Diego California he attended The School of Infantry at Marine Corps Base Camp Pendleton California, and was assigned to Third Battalion, First Marines, Kilo Company, First Platoon.

In August 2001 Mitchell was promoted to PFC, and in November, Meritoriously promoted to Lance Corporal. Mitchell was assigned a fire team, and deployed the USS Belleau Wood as part of the 11th MEU (SOC) in support of Operation Enduring Freedom in June of 2002. While aboard ship, Mitchell attended Squad Medics Course, and Green Belt Martial Arts Instructors Course. During the deployment, Mitchell was awarded a Letter of Commendation from Vice Admiral T. J. Keating while training along Army Special Forces Unit Alpha 1/5 in Djibouti, Africa.

Mitchell returned home with Three-One in December 2002, and went on leave. While on leave the unit was called back to board ships and redeploy to Kuwait. Mitchell married his wife Sara before leaving on the deployment. Three-One arrived in Kuwait in late February, and crossed into Iraq in March 2003. During the deployment Mitchell was Combat Meritoriously promoted to Corporal. The unit returned To Camp Pendleton again in May 2003, and Mitchell was transferred to Third Platoon, and assigned to second squad, as squad leader.

In June 2004 Third Battalion, Third Marines deployed again to Iraq. Two weeks after arriving in country, on July 7, 2004, Corporal Mitchell received his first of three Purple Hearts when he was mortared. On November 9, 2004 Three-One entered the insurgent held city of Fallujah, Iraq as part of Operation Phantom Fury. On November 12, the fourth day of fighting, Corporal Mitchell was shot through the right tricept, earning him a second purple heart. The very next day, while fighting in what has been called the “Hell House,” Corporal Mitchell was wounded again by a grenade blast while trying to reach critically wounded and trapped Marines. In June 2006 Corporal Mitchell was awarded the Navy Cross. He was evacuated from Fallujah and returned to the United States just before Christmas in 2004. In January 2005 Mitchell was Combat Meritoriously promoted to Sergeant.

Mitchell left active duty on March 12, 2005. He and his wife Sara moved to Phoenix, Arizona where he attended Motorcycle Mechanics Institute. His son, R. J. Mitchell III was born in January 2006. Mitchell then attended Glendale Community College where he earned his Associates of Arts with honors. His daughter Grace was then born in November 2009. R. J. began the mechanical engineering program at Arizona State University while working for an aerospace electronic manufacturing company, called Phoenix Logistics, where he supervised a twenty-person production team. He also worked part-time at ASU’s Pat Tillman Veterans. In 2014, R. J. accepted an opportunity to work of Arizona Public Service Company, Arizona’s largest power supplier, while he worked to finish his degree. When Mitchell graduated in 2018 with a Bachelor of Science in Mechanical Engineering he accepted his current position working as a gas turbine engineer with the company’s engineering department.