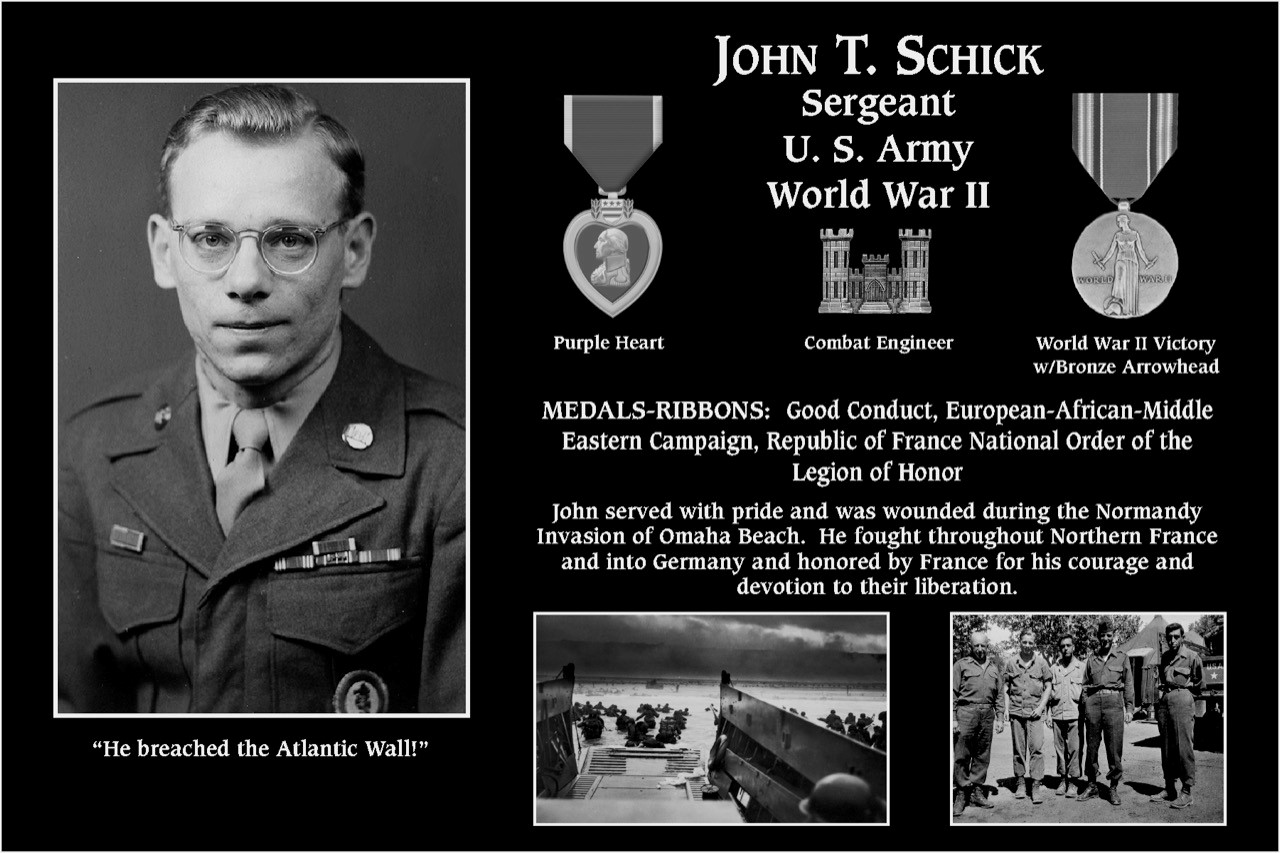 “You are about to embark upon the great crusade, toward which we have striven these many months.” – Dwight D. Eisenhower, to members of the Allied Expeditionary Force, June 6, 1944.

On a spring morning of 2009, I commenced on an expeditionary crusade into a patient’s heart. The mission was to find and destroy a certain electrical circuit which caused him to experience uncontrolled irregular heartbeats.

Lying supine on the surgical table was John, age 86, a retired accountant. He was a robust, sharp-minded man looking no more than 70. He belongs to a generation of Americans with values perhaps foreign to younger generations today.

The surgery involved snaking multiple catheters from the femoral veins into the heart via the inferior vena cava. While I was carefully navigating these catheters inside his body, John was casually carrying on a conversation with me, utterly unfazed by the surgery. The WWII veteran obviously has seen far bigger things in his life than a heart surgery.

As my catheter meandered between the vena cava and the right atrium, our conversation drifted to the topic of WWII.

“Where were you during the war?” I inquired as I positioned a 20-pole catheter around his right atrium.

“And where did you go after England?” I asked while I maneuvered an 8 mm catheter near his tricuspid valve, preparing to begin ablation.

“Omaha Beach,” John replied, without any hesitation and making no big deal out of it.

My jaw dropped to the floor as I temporarily halted the procedure to regain my composure. I realized that I was performing surgery on a man who invaded Normandy on D-Day; I was working inside the heart of a man who helped liberate France, defeat Nazi Germany, and save the world!

From that day on, I put on my “to-do” list a follow-up visit with John. I wanted to sit down with him and hear the story from the perspective of a Sergeant who charged into hail of machine gun fire on June 6, 1944. But this rendezvous with him was put off, year after year, in favor of more mundane things in life such as working.

Recently, my 11 year-old became fascinated with the history of wars. I have been sitting with him, poring over Wikipedia on the likes of Robert Gould Shaw and his famous Massachusetts Infantry Regiment. This week, our focus shifted to the Battle of Arnhem, which was fought with great valor by the British paratroopers dropped behind enemy lines in WWII.

“Alex,” I asked, “How would you like to actually meet someone who was there for the invasion of Normandy?”

“Sure!” Alex replied as his eyes popped wide open in disbelief.

Within a few days, I fulfilled Alex’s wish and my years of self-promise by visiting John at his home in Simi Valley, where he and his wife, Betty, were living. My daughter, Tiffany, came along as well.

The story of John is that of Middle America. He and his high school sweet heart, Betty, grew up in Canton, Ohio, during the Great Depression. In 1943, he joined the army and went to Georgia for boot camp. Clueless about segregation in the Deep South, he didn’t understand for a while why he always received strange glares from white passengers whenever he sat in the back rows of the bus - a place usually reserved for colored folks.

At the camp, he received basic military training and learned to build bridges and lay mines. Within months he found himself on the beaches of South Whale, rehearsing maneuvers on LCVP landing crafts in anticipation of the invasion of German-occupied France. The goal was to breach Hitler’s formidable Atlantic Wall, a solid line of coastal defense that stretched from Norway to Spain.

Shortly after midnight, on June 6, 1944, John and 160,000 other infantrymen, accompanied by 195,000 naval personnel, left England for what would be the largest amphibious invasion in world history. Codenamed Operation Neptune, the epic invasion involved mainly American, British, and Canadian troops, ferried over the English Channel on over 5,000 ships.

John's company was assigned to land on a strip on Omaha Beach nicknamed “easy red.” But there was nothing easy about this perilous mission. The heavily fortified German defense was largely untouched by the early morning naval bombardment and the German guns, mortars, and artilleries were ready for John and his comrades.

"[W]ithin 10 minutes of the ramps being lowered, [the leading] company had become inert, leaderless and almost incapable of action. Every officer and sergeant had been killed or wounded." (Quote from Wikipedia)

Americans assigned to Omaha Beach took the heaviest casualty of the entire operation, totaling 5,000 on day one alone. John personally saw many GIs drown in the water before reaching shore. Once on land, a friend of his was killed a few feet to his right. Shortly thereafter, German shrapnel knocked John out of commission, piercing through his left scapula.

“Were you scared?” it’s a dumb question but I just had to ask.

“When you’re 20 years old, you’re stupid and you do what you are told,” John explained. I know he was being humble. It takes incredible courage and a tremendous sense of duty and honor to do what he and his band of brothers did that day.

John was laughing when he spoke of his own injury, but his eyes welled up as he recalled the deaths of thousands of his fellow GIs on that fateful day. The emotions of that event still resonate 7 decades later.

After his injury, John spent 4 days on the beach waiting to be shipped back to England, where a doctor, seeing the gangrene on his shoulder, administered to him a “new medicine” called Penicillin (discovered in England by Dr. Fleming in 1928, industrialized production of penicillin began in 1941-43). Needless to say, he recovered from the injury, and was back to the front lines in Northern France and Rhineland in mere 3 months.

One of John’s most memorable moments during the operation was when he stood a mere 10 feet away from General Patton. “The Old Man” - nickname for the war’s most famous general - was accepting the surrender of a German general.

For his war injury, John received the Purple Heart. At the medal ceremony, one of the other recipients of the honor was a paratrooper with injuries also sustained from Operation Neptune. The man, however, was skittish about how he received his injury. Word eventually came out that the paratrooper had landed on a cow, which rolled over him and broke his leg! It was a war injury, nonetheless!

At John's house, my children and I saw first-hand his medals, ribbons, and faded photographs related to this historic event. Among the artifacts was a pouch containing various coins with intriguing stories, such as a 1944 British 6-pence, a 1943 Etat Français one Franc, a 1944 Belgian 25c, and a 1942 German 10 pfennig with an eagle and a Swastika! This is a time-capsule which tracks the journey of a young American GI on the front line of one of the most pivotal events in human history.

After the war, John - the man who helped save the world - returned to America to resume civilian life. He completed college using monies from the GI Bill and married his high school sweetheart, Betty. The two moved to California in 1974 and today still live in the same home.

On that Sunday afternoon, my family and I had the honor to meet and interview the war hero, an occasion I am sure my children will remember for the rest of their life. One day, they will be able to say to their own children that they once knew someone who participated in the epic Normandy Invasion.

“Take care of your father. He is a wonderful man. He saved my life,” John said to my children before we got into my car.

“No John,” I corrected him. “YOU saved our lives with what you and your greatest generation had done!”

As my car pulled away from John’s driveway, Tiffany and Alexander spontaneously rolled down their windows, and, in perfect unison, gave my patient a full military solute.

The decorated veteran, in return, saluted back, standing as tall and proud as he did on the shore of Normandy 69 years ago.