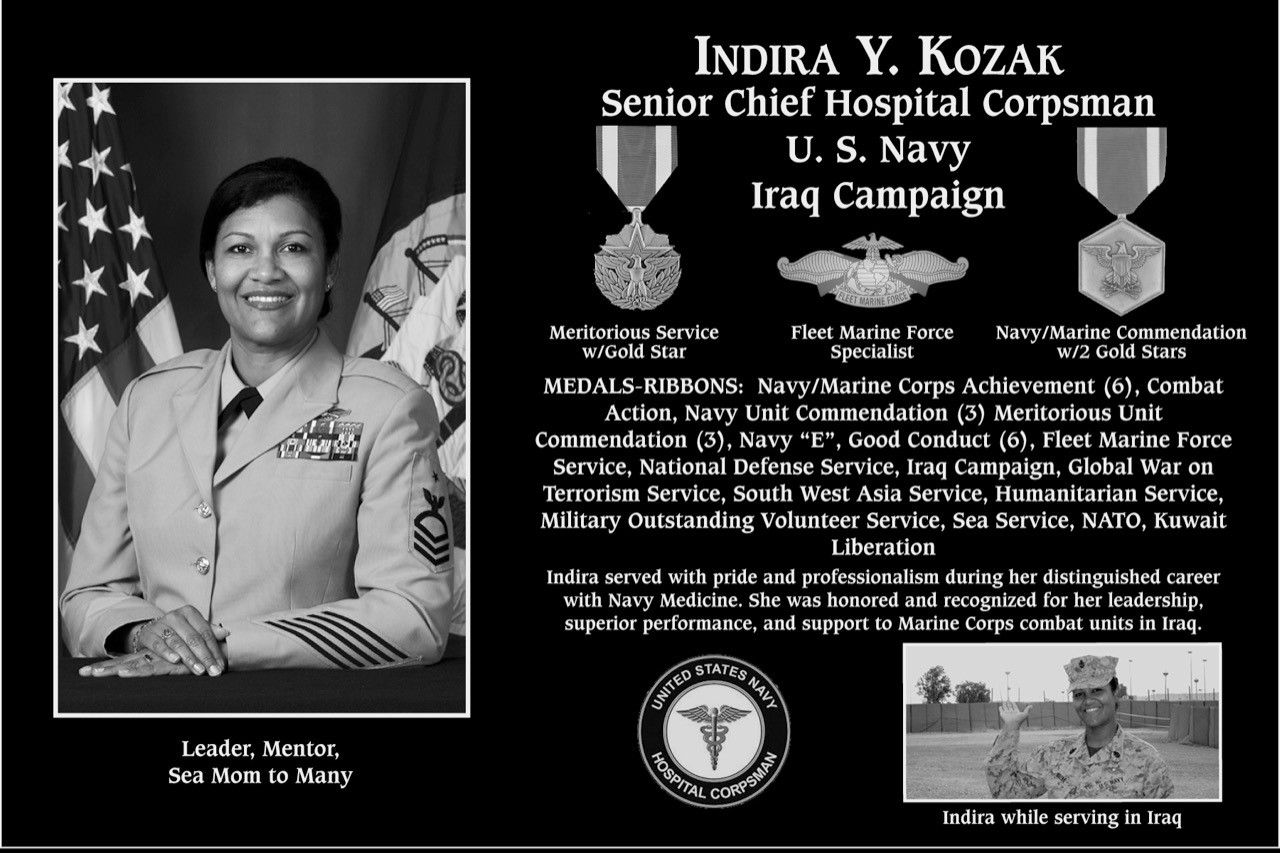 Hospital Corpsman Senior Chief Petty Officer Indira Y. Kozak was born in Panama, Republic of Panama on 6 November 1966. She came to the United States in 1986 and in February 1988 enlisted in the Navy in Miami, Florida. She then reported to basic training at Recruit Training Command, Naval Training Center, Orlando, Florida.

Upon completion of basic training, she attended Ships Serviceman (SH) “A” school in Meridian, Mississippi receiving follow on orders to DEPMEDS Bethesda, Maryland. After advancing to Petty Officer Third Class, she deployed onboard the USNS COMFORT (T AH 20) during Desert Storm/Desert Shield Operation from August 1990 to April 1991.

Upon return from her deployment, Senior Chief Kozak transferred to Great Lakes, Illinois under the SCORE program and attended HM “A” School. In October 1991, she graduated HM “A” School and transferred to National Naval Medical Center (NNMC) Bethesda where she was assigned to the Labor and Delivery Ward and advanced to Hospital Corpsman Second Class Petty Officer. She was selected to attend Cardiovascular Technologist (CVT) School in August 1993 and graduated in September 1994. After graduating from CVT School, she transferred to NNMC Bethesda, where she served as Cardiac Catheterization Staff, Cardiology Clinic Leading Petty Officer and Clinic Manager. After her promotion to Petty Officer First Class in 1999, she transferred to the Command Career Counselor Office where she served as the Leading Petty Officer. Senior Chief Kozak earned her baccalaureate degree in Psychology from University of Maryland University College in May 2001 and promoted to the esteemed rank of Chief Petty Officer in September 2002.

Her persistent nature awarded her early orders to an operational billet, reporting to Field Medical Service School in October 2003. Upon graduation in January 2004, she received follow on to 3rd Medical Battalion, 3rd Force Service Support Group, Okinawa, Japan, where she served as the Leading Chief Petty Officer for S-1. She transferred to 3D Marine Air Wing (MAW), San Diego, CA in 2005, where she served as Marine Air Group 11 Senior Enlisted Leader (SEL). In January 2006, she deployed to Iraq as the 3D MAW Forward Acting Command Master Chief (CMC), where she served until March 2007. After completion of her tour in Iraq, she transferred to Navy Medicine Manpower, Personnel, Training and Education Command in April 2007 and served as Force Master Chief Executive Assistant for Bureau of Medicine. From November 2008 to November 2010, Senior Chief Kozak served as the Executive Medicine Department Enlisted Course (EMDEC) Director until she became the Interim CMC. Her final assignment was the SEL of the Director for Administration Directorate. She completed her Master’s in Administration with a concentration in International Business.