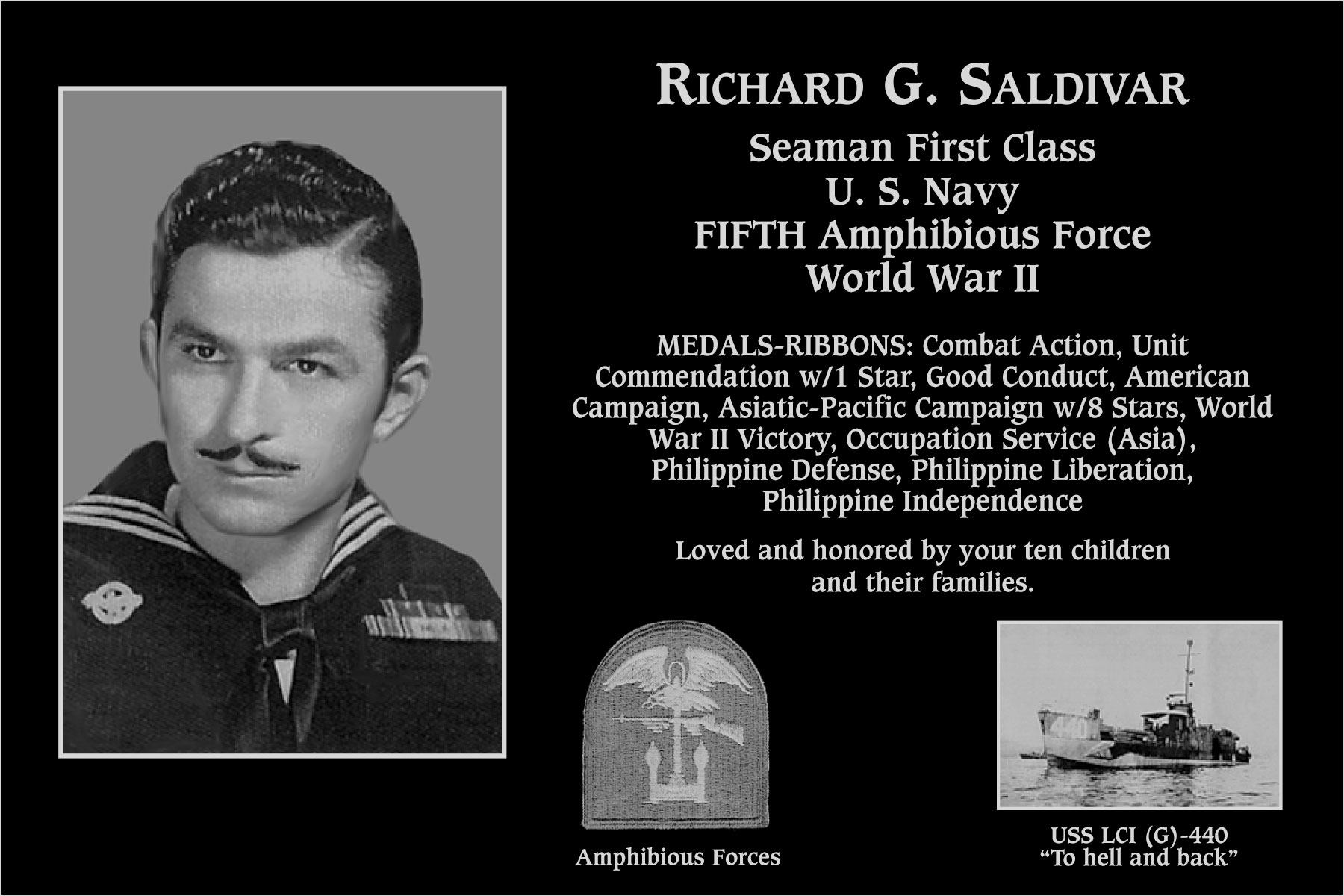 Richard Guerrero Saldivar's service to his country began in September 1943 when he joined the U.S. Navy. While in uniform, he participated in eight (8) invasions during WWII aboard the USS LCI (G) 440 and was honorably discharged in December 1945. In October 1950, he became a civil servant and reported to Kelly Air Force Base, as a portable equipment repairman. In September 1961, he reported to Naval Air Station (NAS), North Island in San Diego, CA as an Aircraft Metal Fabricator and later earned the position of Aircraft Sheet Metal Mechanic. In 1967, he deployed to Da Nang, Vietnam to repair damaged planes which saved the cost of shipping planes home for repair. He retired from civil service on January 8, 1982 after 30 years of faithful service to his country.

Richard had six sons and four daughters and he encouraged them to continue the tradition of military service. Four of his sons are U.S. Army Veterans and his eldest daughter is a Retired U.S. Army Veteran. Additionally, several of his grandchildren have served in the military and one of his great-grandchildren served as an U.S. Army Ranger. Richard's eldest grandson retired after 20 years of service (10 years as a U.S. Marine and 10 years in the U.S. Air Force). Two of his grandchildren are still serving today, his grandson is a LT CDR in the Coast Guard and his granddaughter is a Colonel in the U.S. Air Force.

Richard came from a family rich in military service. He was one of seven brothers of which, six served in the military. Richard and one brother served in the U.S. Navy and four brothers served in the U.S. Army. Their pictures and stories are displayed in the Legion of Valor Museum in Fresno, CA. Together, the Saldivar brothers proudly served over fifty (50) years in the US Armed Forces with honor and fought in more than twenty five (25) major campaigns.

Richard was a man of integrity, courage, pride, determination, selflessness, and dedication to duty. He was known to be a true patriot and would take every opportunity to honor his fellow service members and remember the sacrifices they made and the courage it took to defend honor, duty, and country. This is his family’s tribute to the honorable man he was and his lifelong dedication to duty, honor, and country…God bless you Richard, God bless the troops, and God Bless America.