The Salgado Family, Father and Sons 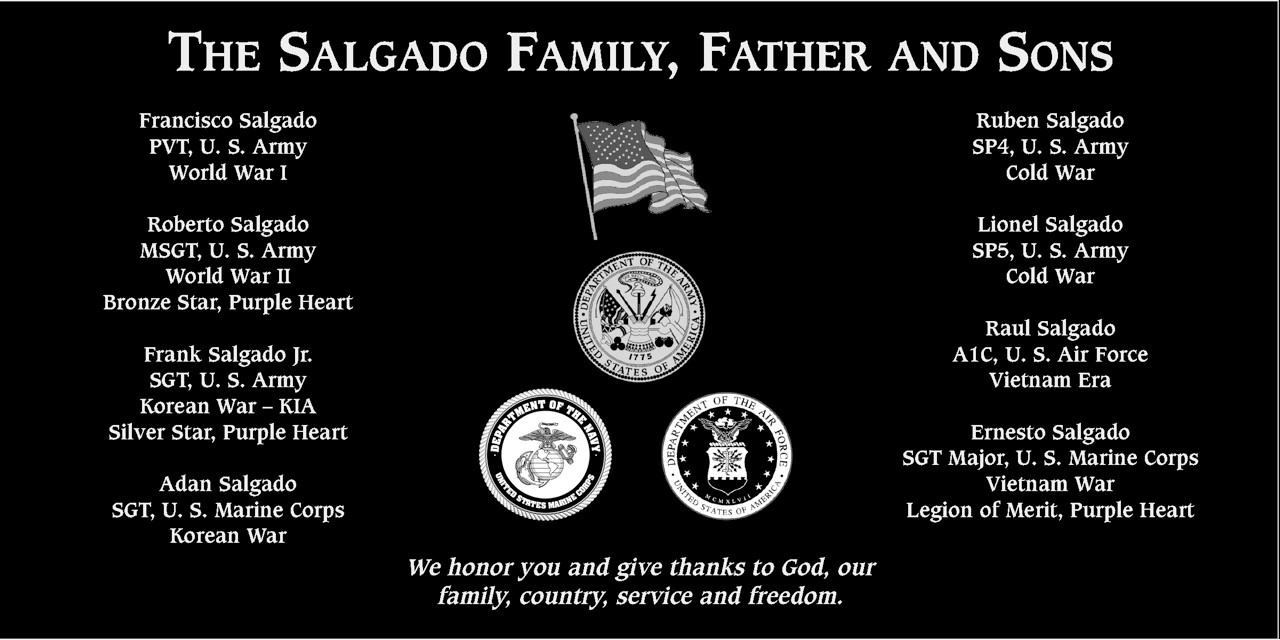 Francisco Salgado was born and raised in the small town of Marfa, Texas. He served in the U.S. Army with honor in World War I, the war to end all wars, as some people called it. Yet, his seven sons were to serve in three more wars, World War II, Korean War and the Viet Nam War, one son giving his life in the defense of his country. Two grandsons, one great grandson and one great granddaughter also served and fought in later wars.

Roberto Salgado, his oldest son, served with the U.S. Army’s 101st Airborne Division during World War II. During his time in Europe, he fought in Germany and was one of the “Bastards of Bastogne.” He was awarded the Bronze Star Medal and the Purple Heart Medal for wounds he received. After the war Roberto worked in the building industry as a foreman and continued his service in the Army reserves retiring as a Master Sergeant. He was married and had two children.

Frank Salgado, Jr. served in Korea during the war as a forward observer with the U.S. Army’s Company “H”, 23rd Infantry Regiment, 2nd Infantry Division. He distinguished himself by gallantry in action. His Silver Star Medal Citation reads:

“SERGEANT FRANK SALGADO, JR, Infantry, United States Army, a member of Company H, 23d Infantry Regiment 2d Infantry Division, distinguished himself by gallantry in action against an armed enemy near Poncho, Korea, 5-6 September 1950. On 5 September 1950, Sergeant Salgado, an 81mm observer, was wounded by shell fragments while adjusting mortar fire from his forward position with attacking elements of Company G, 23d Infantry. At about 1600 hours, on 6 September 1950, after having his wounds dressed at the battalion aid station, Sergeant Salgado insisted upon returning to his duties at a forward observation post of Company F 23d Infantry. Company F was at the time under heavy attack by enemy forces, and Sergeant Salgado, although in great pain from his wounds from the previous day, remained at his forward and exposed post, adjusting mortar fire upon the enemy. The mortar fire directed upon the enemy forces by Sergeant Salgado was instrumental in preventing the enemy from breaking through Company F’s perimeter, and he continued to direct this fire until he was seriously wounded by the shell fragments flying all around him. The gallant and conspicuous courage displayed by Sergeant Salgado in returning to his duties in an exposed observation post, in spite of his painful wounds, fully upheld the highest and finest traditions of military service.”

Sergeant Salgado died of his wounds on September 8, 1950 and was buried in Korea. He was posthumously awarded the Silver Star Medal for his gallant and conspicuous courage. He also received the Purple Heart Medal with two oak leaf clusters.

Adan Salgado enlisted in the U.S. Marine Corps in 1951. While attending cold weather training at Pickle Meadows, Ca, he was sent home to bury his brother Frank whose remains had now been sent home for burial. Two weeks after the funeral, Adan was on his way to Korea where he served with the 2nd Battalion, 5th Marine Regiment, 1st Marine Division. After his end of service, he finished college and became a school teacher. He retired as a high school principal and then worked an additional ten years with the Texas Education Agency. He was married and had three children.

Ruben Salgado served with the U.S. Army’s 101st Airborne Division during the cold war of the 1950’s. He was stationed stateside. After his service, he worked for U.S. Steel in California and retired after 30 years.

Lionel Salgado served with the U.S. Army’s 10th Infantry Division and was stationed in Germany. He also served during the cold war in the 1950’s. After his military service, he married and had three children. He worked twenty years in the grocery business.

Raul Salgado served in the U.S. Air Force in the 1960’s during the Viet Nam war. He was stationed stateside. After his service he remained in California and owned a Home Décor business.

Ernesto Salgado served in Viet Nam with the U.S. Marine Corps. He was wounded in action while assigned to Company “C” 1st Battalion, 7th Marine Regiment. He later served as a Drill Instructor and retired as a Sergeant Major after 26 years of service. He received the Legion of Merit Medal, Purple Heart Medal and the Navy and Marine Corps Commendation Medal with “V” Device. After his military service he became a police officer in San Diego, Ca. He was married and had two boys.