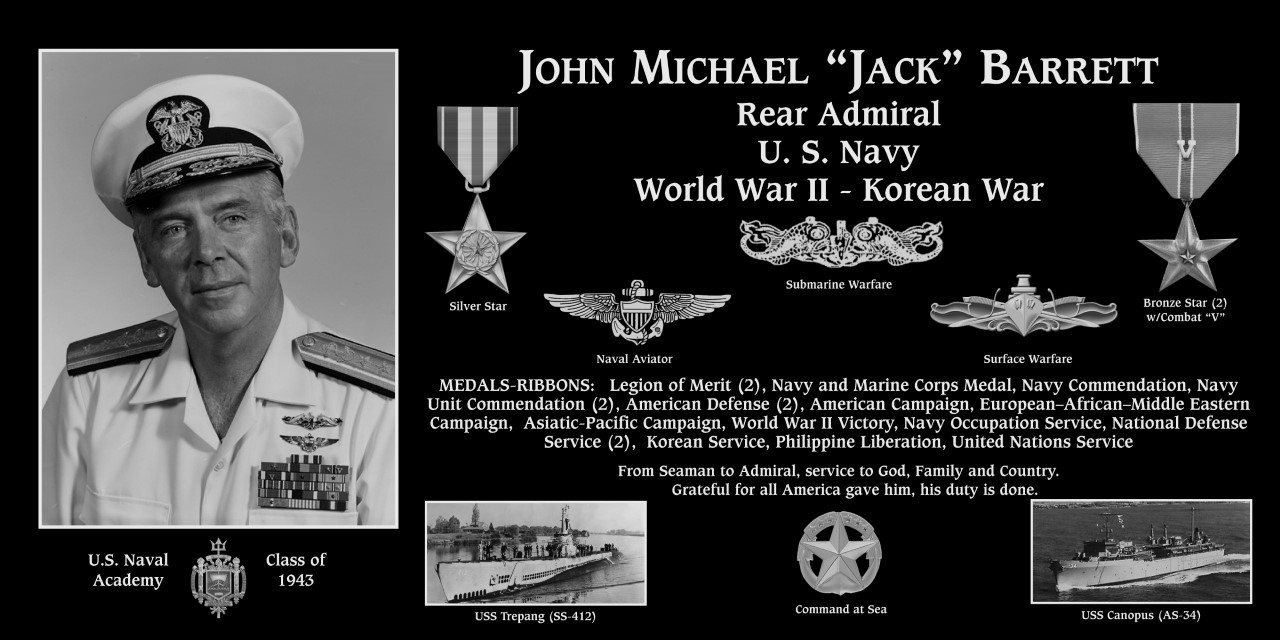 John Michael Barrett, son of John J. and Margaret O\'Neil Barrett, was born on March 14, 1920 in Cedar Rapids, Iowa. He attended Loyola High School, Los Angeles, California, before his appointment to the U.S. Naval Academy, from the State of California in 1939. He graduated with the Class of 1943 on June 19, 1942 (course accelerated due to National Emergency) and was commissioned Ensign. He subsequently advanced in rank to that of Rear Admiral on July 1, 1969.

After receiving his commission, he was under instruction at the U.S. Naval Submarine School, New London, Connecticut, until December 1942, when he reported on board USS HALIBUT (SS-232) as Gunnery Officer. In March 1944 he joined USS TREPANG (SS-512) as Executive Officer.

Silver Star Medal: \"He contributed directly to the success of his ship in sinking two tankers and a destroyer and in severely damaging an enemy battleship\" during the First War Patrol, September 13 to October 23, 1944.

Navy and Marine Corps Medal: “For heroic conduct in effecting the rescue of a shipmate who had been washed over­board from the USS TREPANG during the Third War Patrol of that vessel in enemy Japanese controlled waters in Tokyo Bay on the night of February 28, 1945.\"

Bronze Star Medal: \"He rendered invaluable assistance to his Commanding Officer in conducting successful attacks on enemy shipping, resulting in the sinking of four vessels totaling 35,000 tons, and in preventing enemy countermeasures\" during the Second War Patrol, November 16 to December 22, 1944.

Gold Star in lieu of Second Bronze Star: “On the Fourth War Patrol, April 20 to May 22, 1945 he rendered valuable assistance to his Commanding Officer in conducting torpedo attacks which resulted in the sinking of two hostile freighter-transports and destroyer or destroyer-escort, totaling 11,600 tons.”

In October 1948 he completed Flight Training and was designated a Naval Aviator and all-weather carrier pilot and was assigned as Administrative Officer of Air Antisubmarine Squadron TWENTY-ONE.

In April 1949 he assumed duties as Executive Officer of Air Submarine Squadron TWENTY-FIVE. He then reported as Assistant Operations and RWO Officer on the Staff of Commander Carrier Division FIVE which deployed to Korean waters immediately upon the outbreak of hostilities in June 1950. While assigned he conducted ASN Task Force patrols and participated in the INCHON landings of September 1950. He was subsequently ordered as Training Officer for the Fleet Airborne Electronic Training Unit, Pacific from December 1950 to December 1951. He then reported to the Naval Air Test Center in Patuxent River, Maryland, as Test Project Pilot until September 1952 and completed the Test Pilot Training #8 course at the beginning of that term.

Following this tour, then Lieutenant Commander Barrett returned to submarines as Executive Officer of USS SEA OWL (SS-420) in December 1953, retaining that command until February 1956. In March 1956 he joined the Staff of the Commander in Chief, Atlantic Fleet as Pro-Submarine Operations Officer, and began instruction in the Senior Course at the Naval War College, Newport, Rhode Island in August of 1957.

In August 1958 he joined the Staff of Commander Submarine Force, Pacific, as Force Personnel Officer, and in August 1960 became Commander Submarine Division SEVENTY-THREE. He was then assigned to the Office of the Chief of Naval Operations, Navy Department Washington; DC, as Head Submarine Systems Requirements and Readiness Branch (OP-31) in August 1961 and transferred to the Special Projects Office for Polaris/Poseidon development as Head, Plans and Programs Branch in July 1963. During this assignment he was assigned as U.S. Executive Secretary of the Joint United States/United Kingdom Polaris Program and was instrumental in the development of the Polaris Follow on Test (FOT) program, where he developed the five-year funding plan for the introduction of the Poseidon, replacement missile to Polaris. Additionally, he served as the Executive Secretary for the initial SSBN Defensive System Steering Committee and supervised the development of the funding plan for the development and introduction of the Navy\'s Deep Submergence Rescue System. He was a member of the Advanced Management Program at Harvard Business School from September to December 1964.

In May 1965 he became Prospective Commanding Officer of the latest POLARIS submarine tender, USS CANOPUS (AS-34), at Pascagoula, Mississippi. He commissioned CANOPUS as its first Commanding Officer at Charleston, S.C. In August 1966 he became Commander, Submarine Squadron SIXTEEN, the Polaris Squadron based at Rota, Spain. He was awarded the Navy Commendation Medal and was cited in part as follows: he \"...contributed significantly to the Fleet Ballistic Missile Submarine program and to its perfection as a forceful and deterrent power…\"

He assumed command of Submarine Flotilla ONE in July 1967, which consisted of 48 nuclear and diesel-powered submarines and submarine rescue ships, 3 submarine squadrons, and Submarine Development Group Two. After selection to Flag rank he was ordered as Chief of the Navy Section, Joint U. S. Military Mission for Aid to Turkey, with headquarters in Ankara, Turkey and \"for exceptionally meritorious service from August 1968 to July 1970\'\' was awarded the Legion of Merit. In August 1970 he was ordered as Deputy Chief of Naval Material (Programs and Financial Management), Naval Material Command, Washington, D. C. In February 1972 he was assigned additional duty as Director of the Fiscal Management Division (OP-92) Office of the Chief of Naval Operations. In April 1974 he assumed command of the U.S. Service Force U. S. Pacific Fleet, becoming the first Commander Naval Logistics Command U.S. Pacific Fleet on July 1, 1975.