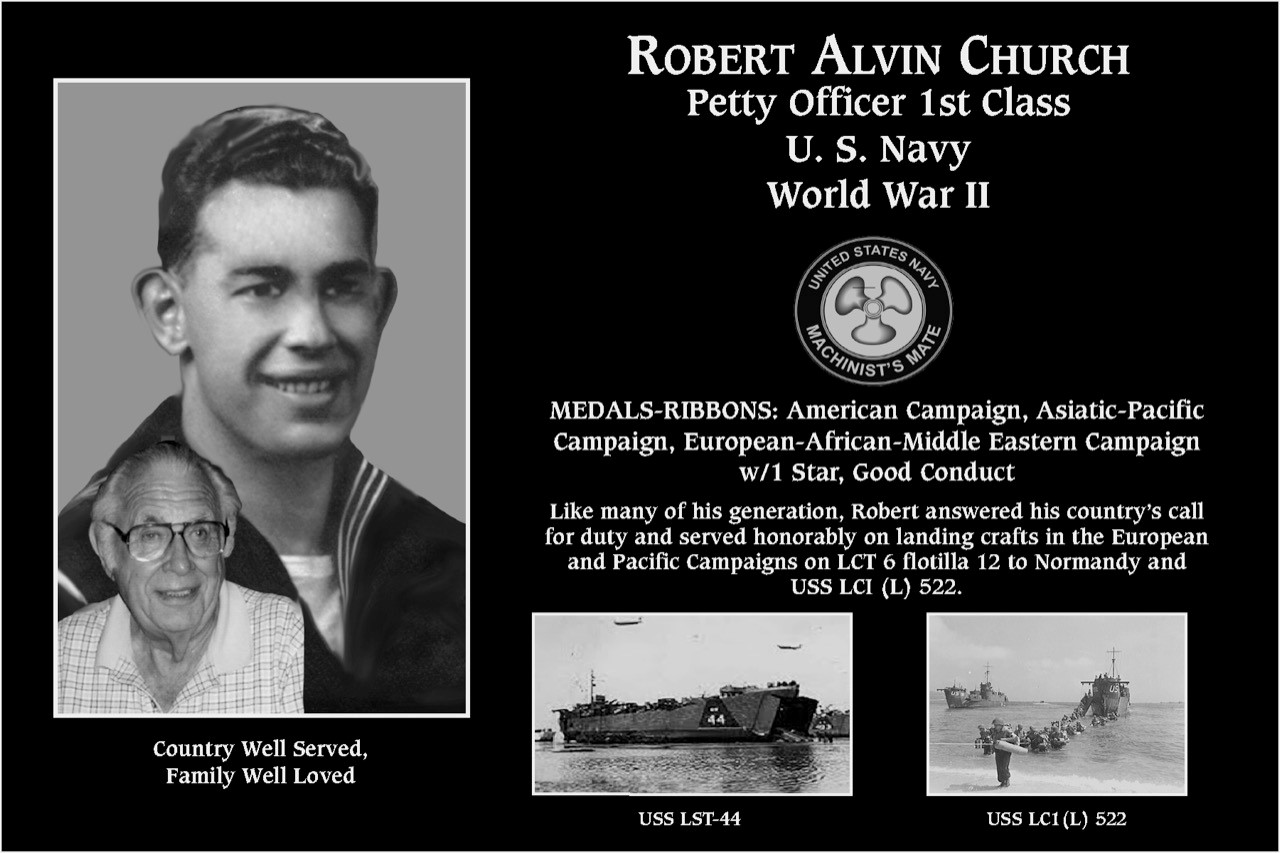 Robert was born October 9th, 1922 in Byron, Washington. The middle child and only son of Alvin Quincey and Vivian Osa Dunnington Church. Bob was a descendant of early adventurers who arrived in the New World as early as 1639. Family history includes Pioneers, Scouts, Indians and a link to John Tyler, our 10th United States President. Eventually his father’s family arrived in Washington State by wagon train: his mother’s arrived by an immigrant train to settle a homestead in Horse Heaven Hills. Bob was raised in Sunnyside Washington. He was smart, artistic, played the violin and excelled in sports. He played on a minor league baseball team, received a scholarship to play at Washington State University and was expected to play professionally but WWII changed those plans and in 1942 he enlisted in the U.S. Navy. The navy sent him to school at the University of Missouri, Columbia to be a MotorMachinist Mate, after which he worked and trained others in the engine room. He served aboard various landing crafts, participated at the Normandy Invasion and in the Paciﬁc after the war. He received an Honorable Discharge in 1946. In 1943, while on leave in the east coast Bob met and fell in love with Eleanor Marie Curcio. After the war, they were married in her home town of Lodi, New Jersey and had three children: Barry Alvin, Judith Ann and Alvin Joseph. In New Jersey, Bob worked in construction but the family dream was to move to California. In 1960, Bob and Eleanor loaded the car with the kids and a few belongings and headed west. In California, Bob continued in construction eventually becoming a vice president of Koll Development, building much of Orange County and San Jose. He retired from Koll in the early 1980’s when Bob and Eleanor moved to Hawaii, after which he also founded his own company and continued to develop and manage projects into his 90’s. Bob and Eleanor spent many very happy years between their home on the Big Island and their home at Bear Creek in Murrietta, California until Eleanor’s passing at the Millennium, after 54 blessed years together. Soon after, Bob moved to Oceanside, California where he resided at his passing on January 7th 2018. Bob is survived by three children, eight grandchildren and ﬁve great-grandchildren, who all still adore him and now sadly miss him. At the age of 95, he lived on his own, loved to cook and was still driving. That persevering, pioneer blood ﬂowed through him till the end, when he passed quickly, peaceably with his loving family around him- jast as he wanted.