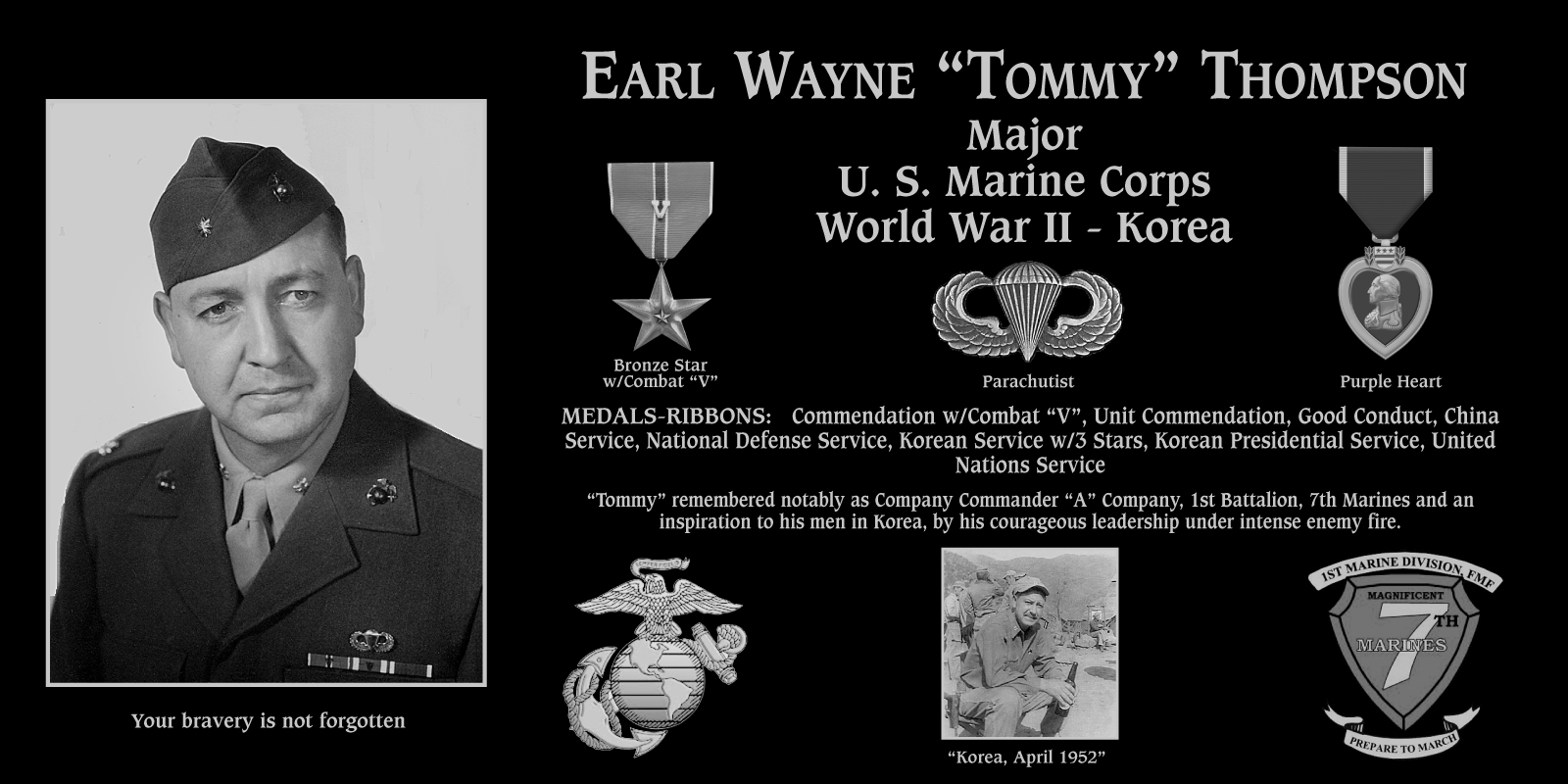 Major Thompson was born on November 24, 1918 in Cushing, Oklahoma. He attended high school in Watsonville, California, graduating in 1937. In 1970, he received his Bachelor of Arts Degree in Education from San Diego state University. He is also a graduate of several military schools to include the Staff Planning Course, Amphibious Warfare School, Nuclear Weapons Course, Embarkation Course, Fiscal Accounting Course and the Nuclear Weapons Refresher Course. In 1941 he was assigned to the 13th Parachute Platoon and became one of the first Marines to graduate from the newly formed Parachute School located at NAS Lakehurst, New Jersey.

In 1938 he enlisted in the Marine Corps and by 1943 had been promoted to the rank of 1st Sergeant. During this time he served tours with the USS Portland(CA-33), 2nd Parachute Battalion 2nd Marine Division and MCRD as a Drill Instructor. In 1944 he was Commissioned as an Infantry Officer. From 1944 to 1947 he served as the Company Officer for Marine Corps Schools at MCB Quantico as well as Assistant Provost Marshal for the 1st Marine Division in North China. In 1947, as Company Commander for A Company 6th Marines, he participated in the Point Barrow Resupply Expedition at the Artie Circle. From 1949 to 1951 he was assigned to the USS Chilton(APA-38) as the Combat Cargo Officer.

In 1951 he deployed to Korea as Company Commander for A Company 1st Battalion 7th Marines. At the conclusion of the Korean War he was reassigned to Camp Pendleton as the Chief Instructor for the 1st Infantry Training Regiment and eventually the Assistant G-3 for the base. From 1955 to 1958 he served as the Executive Officer for Marine Barracks, Newport, Rhode Island; during this time he also served as a member of the President of the United States' Special Security Staff. From 1958 to 1963 he served as Executive Officer 3rd Battalion 3rd Marines and later as Provost Marshall of the 3rd Marine Division in Okinawa, Chief Instructor for the Air Support School at NAB Coronado and Director of the Logistics & Fiscal Branch for the 12th Marine District. Major Thompson retired in February 1963 after 25 years of service.

Upon retirement, he served one year as an Investigator with the U.S. Civil Service Commission, six years as Assistant Director of Discipline for the 11th Naval District and twelve years as a high school teacher with the San Diego Unified School District.

Major Thompson was married to the former Elizabeth Helen Lemons of El Centro, California, who passed away in 1977. Major Thompson passed away on May 5, 2014 at the age of 95. He was buried at sea the following year, on May 28, 2015 off the coast of his beloved San Diego by the men and women of the USS Howard. He has two children, Burton Gray Thompson and Carol Thompson Lunsford, both of Carlsbad California.