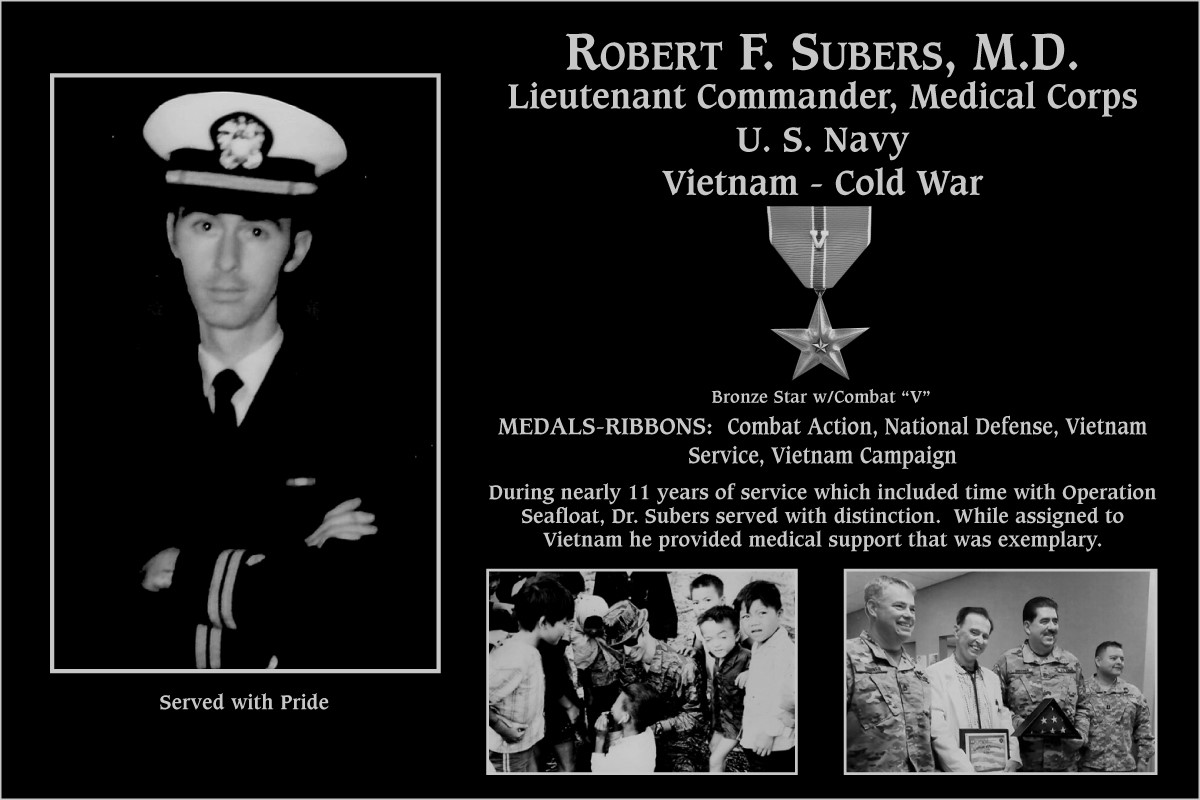 Dr. Robert Subers was born August 28, 1942. He grew up in the small town of Holmes, Pennsylvania, just outside of Philadelphia. The 2nd of 5 children he went to St. James High School and worked part time at a local pharmacy.

Bob went on to attend college at Mount St, Mary’s in Emmitsburg, Maryland. It was there that he earned his Bachelor’s degree and graduated with honors in 1964.

Wanting to continue his education, Bob was accepted to Loyola University Medical School in Chicago, Illinois. After receiving his Medical Degree and serving his internship at Cook County Hospital, Bob joined the Navy to start his medical career.

Bob was sent to Marine Corps Base Camp Pendleton in Oceanside, Ca. in April 1969 to prepare for his deployment to Vietnam.

At this point, I would like his Citation read that he was given for his service during his Vietnam tour of duty. It is attached to this BIO.

Other medals awarded were the National Defense Service Medal, the Vietnam Campaign Medal, and the Combat Action Technical Medal.

Upon his discharge from the Navy, Lt Commander Subers, chose to remain in Vietnam. His concern for the people of Vietnam, and their need for civilian doctors, combined with the opportunity to experience a broad spectrum of doctoring, motivated him to stay for 3 years. He left Vietnam one month prior to the fall of Saigon.

Bob returned US and shortly thereafter, opened his practice as a family physician in Clovis, Ca. For the next 42 years, he continued his “service” to his patients, which also included a large military population.

On his retirement in May 2017, he was presented with a letter of appreciation, a plaque, and an American Flag, which was flown in IRAQ, on behalf of the Fresno Army National Guard. Many of whom were patients of his. You can see them in the photo on the Mt Soledad plaque.