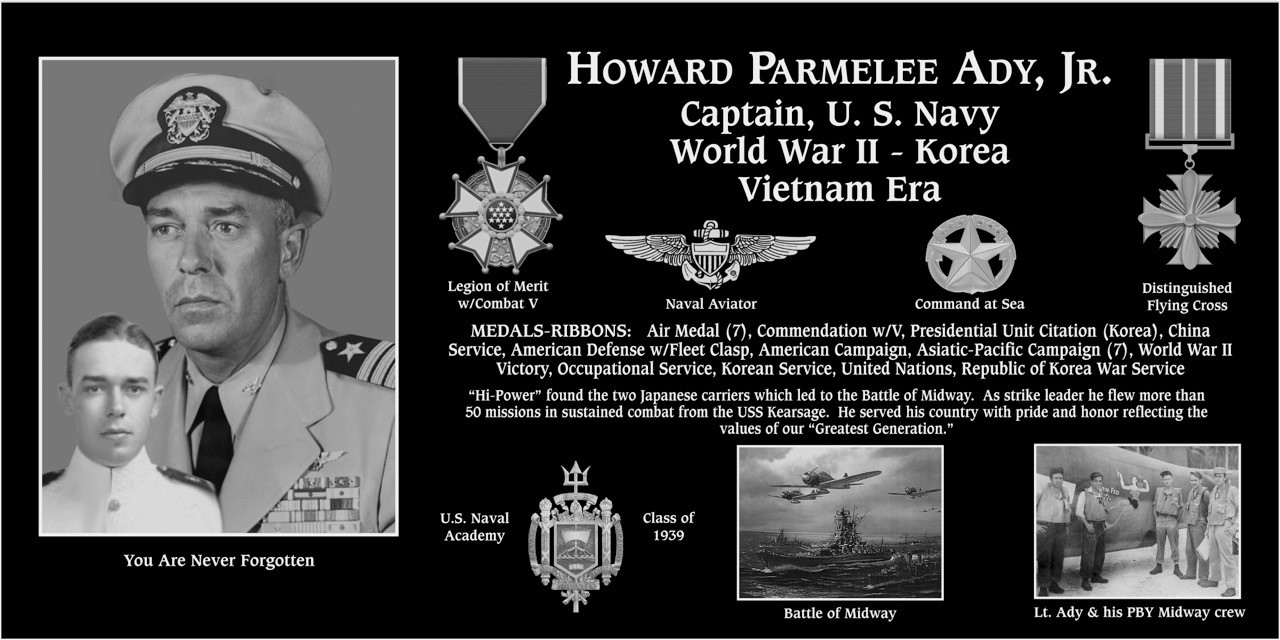 Age 80, of Sun City West, AZ., took a final flight on April 23, 1998, from his home in Sun City West to The Kingdom of Heaven. “And he slipped the earthly bonds, put out his hand, and touched the face of God.“- (High Flight by John Gillespie Magee, Jr.)

He was born July 25, 1917, in Colorado Springs to Howard Parmelee Ady, Sr. & Marie McCombs Ady.  Howard & his younger brother, Joseph Wesley Ady, would walk 4 miles to school in Goldfield and often ride on one of the many mules abandoned by miners.  Joe was also a career Naval Officer, retiring as a Commander, USN. Howard went to high school in Malakoff, Texas and at age 15, attended North Texas Agricultural College at Arlington, Texas in Electrical Engineering at age 17.  He received a Congressional Appointment to the U.S. Naval Academy in 1935, graduating in 1939, with a Bachelor of Science in Mechanical Engineering.  After sea duty, he received his Naval Aviator Wings of Gold, at Naval Air Station (NAS) Pensacola, FL.

He was a career Navy Officer during his 28 years in the Navy, and spent 13 of those years either in foreign or sea duty within various commands of the Navy. He was a graduate of the U.S. Naval Academy in 1939.

Shortly after sunrise on June 4, 1942, a PBY-5 "Strawberry 5" search Plane, flown by then, Lt. Howard P. Ady, Jr., USN, reported the sighting of a Japanese carrier force--the "Kido Butai,"-- 200 miles northwest of Midway. This warning alerted the forces in and around Midway that the long-expected Japanese attack was about to begin. Most historians and experts believed that the engagement that ensued was the pivotal battle of WW II. It was called The Battle of Midway.

He proudly represented the Greatest Generation throughout his distinguished military service career.  We will never forget.