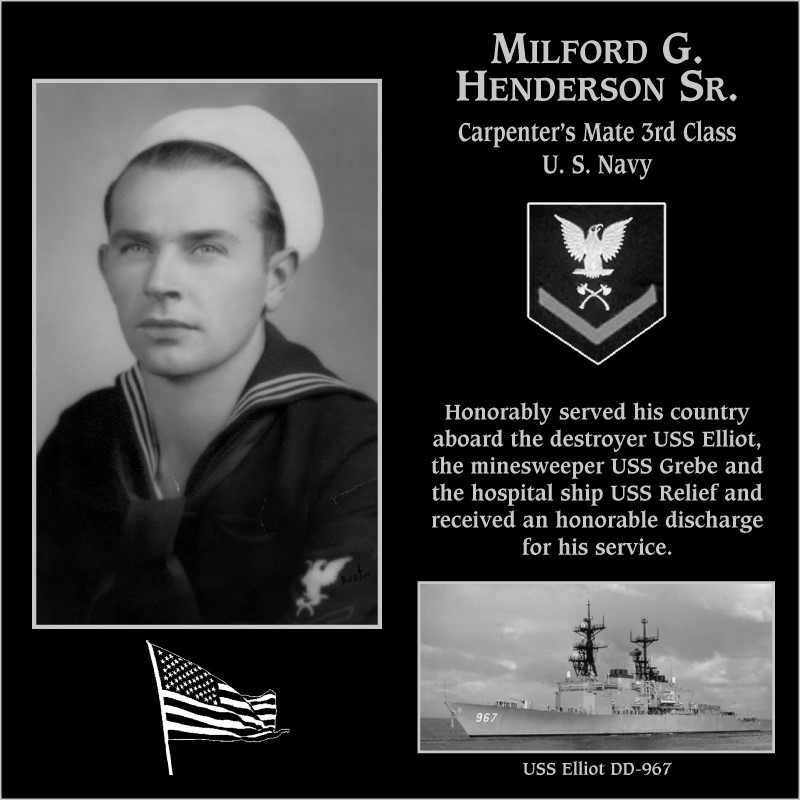 I’m Dawn Ayles – the 4th granddaughter of Milford Gail Henderson Sr. There are 8 of us granddaughters and 6 grandsons…we’ve lost count of the greats 

In 1912, Milford Gail Henderson was born in New Philadelphia, Ohio.

At 22 years old, he joined the Navy as an apprentice seaman. He served his country for 6 years before he was discharged in San Diego on April 16, 1940, as a Carpenter’s Mate 3rd class.

During his time in the Navy, my Papa served on the USS Elliott (a Wickes Class Destroyer), the USS Grebe (a Lapwing Class Minesweeper), and on the USS Relief, which was the first ship designed and built as a Hospital ship for the Navy.

A few months prior to his discharge from the Navy, Papa suffered an extremely severe sunburn - to the point that he almost died. He was treated on the USS Relief hospital ship where he remained for a short time after his recovery. The last assignment of Papa’s military career was at the Balboa Naval Hospital. There, he assisted the doctors and nurses in the medical wards until his discharge.

Although Papa was an aircraft mechanic by trade, he worked many years as an experimental mechanic on various classified government projects for Convair Aircraft Company. (Convair Aircraft Company eventually became General Dynamics.) He never shared anything about what he was working on, as it was considered “TOP SECRET”. We just knew that he faithfully went to work at Convair for 34 years before retiring, and we were blessed to have him with us for another 28 years after that.

He had a natural talent for woodworking and carpentry, and was constantly working on projects. Papa built 2 homes for his family, which he completed in the evenings after work and on weekends. He loved to work on projects with his kids, like helping Bobby and Gene build their first soapbox derby racers when they were younger, and working on all the kids’ cars when they were older!

Papa was a thinker and a creator – an inventor. He enjoyed turning his ideas into reality. During the 40’s, he invented his own electric lawnmower and in the process, almost lost one of his big toes! He was an avid smoker but smoking wasn’t allowed in many of the hazardous areas he worked at Convair. Rather than waste perfectly good, half-smoked cigarettes, Papa made himself a metal pocket cigarette holder for those times his smoke breaks were cut short!

In many ways, Papa’s mind was far beyond his time. During his employment at Convair, he actually created a space station that looked very similar to the ones we’ve seen in the Star Wars movies decades later. He submitted this idea to Convair but it was rejected because it was just too far fetched for the time.

The list of Papa’s incredible accomplishments is very, very long.

Our grandfather was wise. He was a quiet spirit and when he spoke, we all knew to listen.

He had incredible knowledge that he enjoyed passing on to us at every opportunity. Papa also had a huge heart - He loved his family, and we loved him! We are three generations deep of kids, grandkids, and greats who have been impacted by the spectacular legacy of our Papa, Milford Gail Henderson.