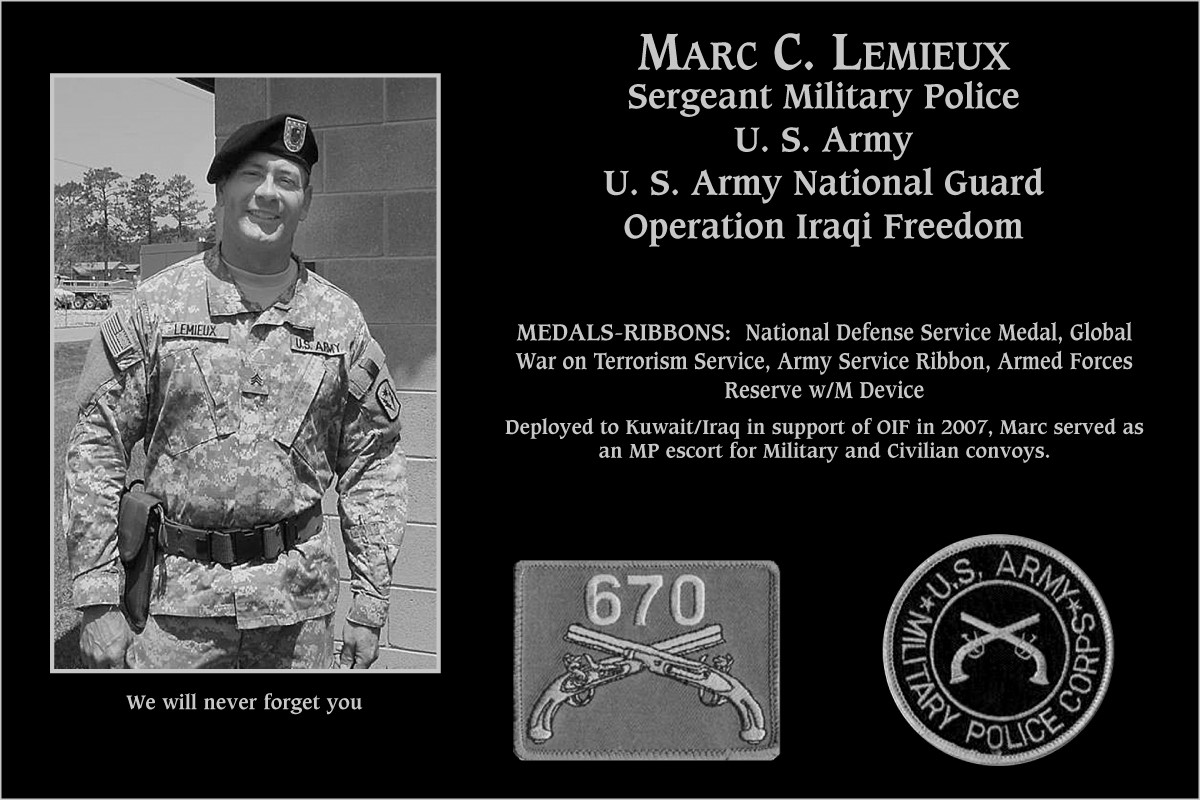 Marc Camille Lemieux as born in Sherbrooke, Quebec, Canada on the 22nd of Oct 1957. His family moved to Los Angeles when he was two years old. He grew up pumping gas at his father’s service station and reading every car and motorcycle magazine he could sneak into his textbooks at school.

He loved skateboarding, surfing, biking and spending weekend’s dirt bike riding with his Canadian relatives in the desert.

Marc proudly became a US Citizen in 1984. He worked for Animal Control for 10 years before enlisting in the US Army Reserve in 1988 and completing his Military Police (MP) training at Ft McClellan, Alabama. As part of his training he received the Army Service Ribbon, Rifle M-16 (Sharpshooter), Hand Grenade (Expert), Pistol .45 (Sharpshooter) and Pistol .9MM (Expert). He was part of the Co A 4th Bn 160th Infantry. He joined the Army National Guard, Military Police unit (670th) out of San Diego in 2003.

His Army enlistment provided him the opportunity to go back to college to earn his Bachelor’s in Education and subsequently his Master’s in Education. While serving as a Sergeant in the National Guard Marc taught High School Metal and Wood shop. Marc had four children (Kate, Robin, John and Claire).

Marc took pride in keeping his body in shape and was awarded the ‘Physical Fitness Excellence’ patch in his late 40s. He loved showing the ‘youngsters’ that the ‘old man’ could still take them on and win, though to be a good soldier you need more than to be physically fit. You need to possess courage, integrity, agility, and you need to be able to adapt to situations that you never encountered in training. Marc possessed those traits. He understood that you need to be able to switch tactics and try something new. He was always thinking ahead so would question leadership. Most of the time that resulted in the response: ‘Sergeant, why are you here?’ and ended up with an order to drop and do pushups to which he would ask: ‘Do you want them one handed or two’?

Marc, at 49 years old, was deployed to Kuwait as part of the 160th Infantry in support of Operation Iraqi Freedom (OIF) in 2007. He could have opted out due to his age but he felt that he had to go with the rest of his unit. He served his time in Theater as a MP escort for Military and Civilian convoys. Marc also provided MP support for officers arriving in country. He subsequently injured his back in a combat zone and was medically discharged in 2008.

Marc joined the San Diego Antique Motorcycle Club (SDAMC) in 2009 because of his passion for vintage motorcycles and served as President of the club for two years (2014-2015). His encyclopedic knowledge of vintage bikes also gave him the opportunity to judge at prestigious California events to include: The La Jolla Concours, the Quail Gathering, the Celebration of the Motorcycle in Del Mar and Dena Point. For the last few years Marc enjoyed being a Committee member for the La Jolla Concours d’Elegance Car Show, helping to facilitate events the weekend of the show.

Marc was the Neighborhood Watch Captain and found himself answering neighbor’s phone calls and investigating suspicious behavior in the area. He was also the ‘go-to’ guy and was happy to help anyone. Marc could fix anything and amassed a tool collection such that if asked if he had a specific tool he would say ‘I’ve got it in every size. What exactly do you need?’ His standard answer to any problem was ‘I’ve got a tool for that’.

Marc loved life and his enthusiasm was infectious. He was always smiling and telling stories. He was kind and compassionate with everyone. Someone said of Marc: There are few people in your life that actually show you themselves and it was such a pleasure that Marc really showed who he was. I don’t have any feeling of not knowing what an amazing person he was. He did not leave one moment of life not lived and his passing reminds us to remember to do just that.