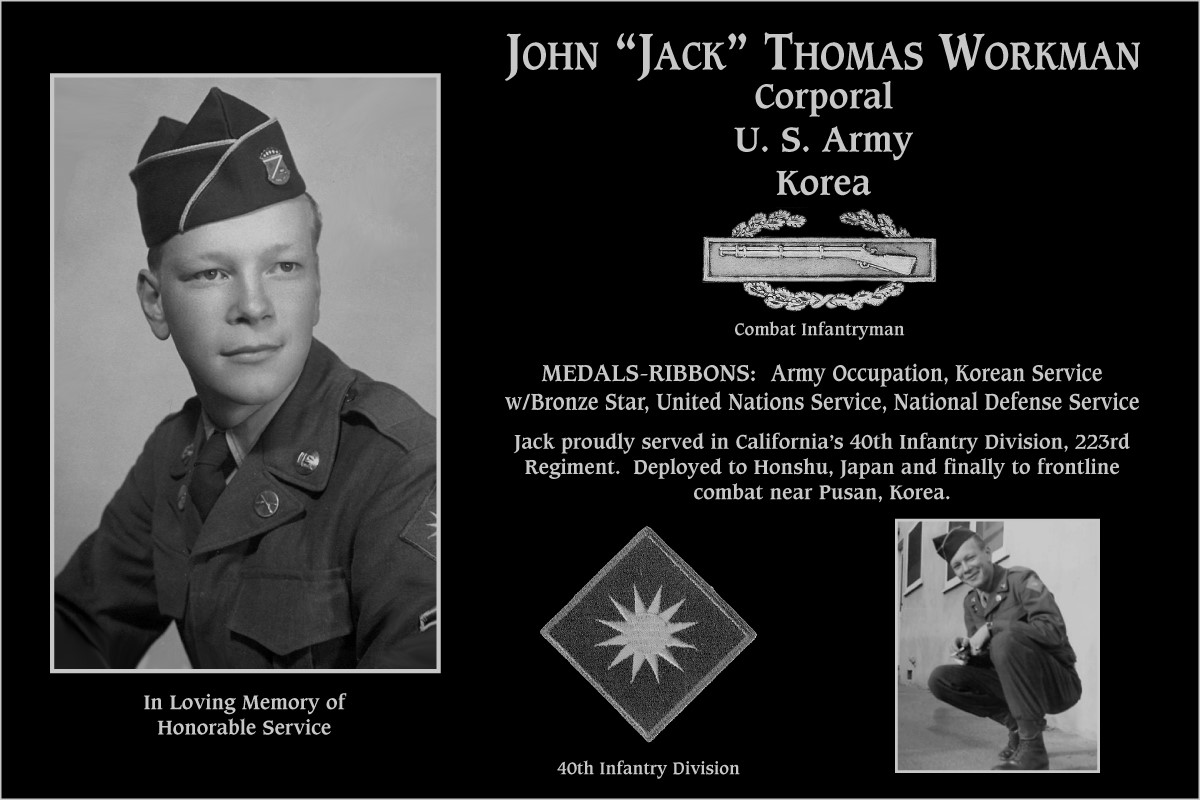 In loving memory of honorable service

BIOGRAPHY John Thomas Workman (Jack) was born on July 21, 1932 in Martin’s Ferry, Ohio and relocated with his family to California where he attended Antelope Valley Joint Union High School in Lancaster, California and graduated in June of 1950. After high school, as a bold 18 year old, he joined the National Guard entering the 40th Infantry Division, 223 Regiment at Camp Cooke, near Santa Maria, CA (Now Vandenburg AFB) for training with units slated for combat in Korea. The Korean War officially started on June 25, 1950.

A few days before Annual Training in July 1950, the 40th Infantry Division received a secret alert for mobilization. On August 10, 1950, the Division was inducted into federal service, and at noon on September 1, 1950, every Guardsman in the Division, including Jack, mobilized at their armories. Jack always felt honored to be called in defense of his nation as a California Guardsman, though it was difficult to leave his family, friends, and home.

On February 28, 1951, Major General Hudelson, Commanding General, told the Division to prepare for overseas deployment: "…I am depending on you--men of the 40th--to do and do well whatever duty we are called to perform. You will be ready to leave for Japan in the latter part of March…" The Division was assigned as Occupation Forces and Corps Reserves in Japan, replacing the 24th Infantry Division fighting in Korea. Jack knew he could be counted on, he was dependable!

His basic and advance training continued through the fall and winter until March 29, 1951, when the division's main body departed California for the Japanese island of Honshu.

Crossing the Pacific on a military troopship from the United States to Japan was a rough ride with many seasick GIs. Someone from the galley told Jack to “eat canned peaches” and gave him a can. He was one of the few who survived the crossing without being sick most of the way.

On April 10, 1951, a military band played "California Here I Come", while Jack with the 40th Infantry Division were disembarking at Tokyo Bay, Honshu, Japan. Almost immediately, they were given the mission of defending the northern part of the island while continuing with aggressive Advanced Combat Training for deployment to the Korean Peninsula.

Three days before Christmas the division was alerted for that deployment and an advance party left on December 26, 1951. Major General Hudelson’s directive was being played out … they were to relieve the battle hardened 24th Infantry Division and on January 7, 1952, they boarded troopships bound for Pusan, near Seoul, Korea.

When Jack and the troops arrived in Korea, they were immediately put into the frontline. As they passed the war-weary veterans returning from the front lines, you could cut the air with a knife … anxiety and apprehension were hanging like thick dark clouds. The veterans of the 24th Division looked physically tired and emotionally beat. As they pulled off the line into reserve, Jack heard many of them whisper to 40th soldiers as they passed, “good luck and a safe trip home next year.” Arriving in January - in the middle of winter - didn't help matters. Jack and the troops found the sub-zero weather bitterly cold. Jack would recall this period in Korea as the coldest time of his life and never liked to be in cold weather for any reason after that. He recounted how he learned to shave and clean up with water in his helmet while he was standing “a_ _-deep in snow!”

The Division fought many fierce battles and suffered heavy casualties including 311 who were killed in action. Jack lost his best friend Wally who was brutally tortured and killed while being used as a decoy for his company on patrol. After returning home from Korea, Jack suffered nightmares for years – living the incident over and over, hearing his friend’s screams for help, finding him and his seeing his torturous death. (Not much help back then for what is now called PTSD.) War brings tragic loss, but also a sense of brotherhood that cannot be found anywhere else. During the frontline action, Jack was assigned to be the jeep driver for Captain Jenks, of his C Company. There were several incidents of shelling so near the jeep that they both thought it was “the end” and a close “father/son” relationship developed in the months of fighting that followed.

Years later, Jack researched and found Captain Jenks living near Phoenix, Arizona. So, Jack, his wife Danielle, and his children traveled to Phoenix from California to meet with him. An entire day around the hotel pool was filled with combat stories shared quietly, some laughter and some tears as the men remembered their time together in Korea while catching up with one another’s lives after the war. A great reunion!

Upon returning home after his combat duty as a corporal, to his parent’s home in Glendale, CA in July 1952, he pursued a young woman living in Los Angeles, with whom he had attended high school. They were finally married in April 1953 and lived in southern California. Jack and his wife, Danielle had two sons, Michael Edward Workman and Christopher John Workman. Jack has seven grandchildren, Andrew, David, Abbey, Blake, Grace, Alexa and Aliza Workman.

Jack passed away on February 14, 2016 and is survived by his second wife, Diana Workman, his children and grandchildren.

Jack was always very proud to have served his country and was very grateful for the lessons learned in that service. Lessons of discipline, duty, honor, love of his country and commitment to both his family and his brothers- in - arms.