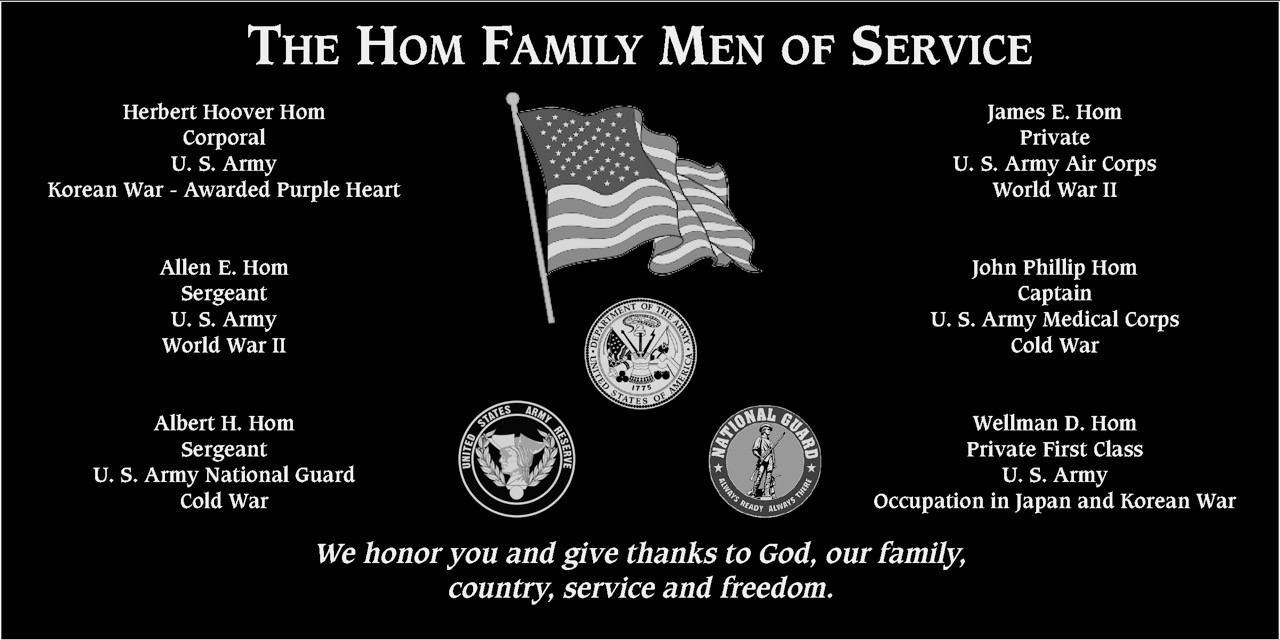 In 1909 my father, Hom Chong, who at age 15 came to America, and came ashore in San Francisco, where he stayed with a relative for 3 days, before moving on to San Diego. During that period, he was taken to the Chinese Presbyterian Mission in Chinatown. In the course of his visit, he learned the Bible story of David and Goliath. He was so impressed with that story that he decided to use “David” as his American name.

In San Diego David started his own little door to door fruit and vegetable business. In time he succeeded in growing his business into a large wholesale produce establishment, called David Produce Company, serving restaurants, grocers, hospitals, etc. During that time, he married and had 12 children, with 9 boys and 3 girls.

With that many children, David had one important rule. He insisted that we all have dinner together, with the radios turned off, no Lone Ranger or Gang Buster programs and that books were put away. That was the time he would call upon us, individually, and ask what we learned and did in school that day. He also would remind us about our responsibility to each other and of being good serving citizens.

Father would also emphasize that America was good to us. He wanted us to be recognized as good citizens and stressed that we need to pay back to society whichever way we can.

As the years went by, the children of David Hom have given back in many areas of their lives - in the fields of medicine, law, education, government, business and philanthropy. With that background, they sought out and performed volunteer work whenever they saw a need.

One of the most important area of needs was to have a dedicated military force to uphold the sovereignty of our country. Amongst the nine boys of David Hom, six of the nine boys have served in the military force for the protection of America. These 6 brothers, who have served at different times, are being honored with a plaque at the Mt. Soledad National Veterans Memorial in LaJolla, California. The six brothers are noted, by being the eldest and then the next eldest, and so on…

JAMES E. HOM, joined the U.S. Army Air Corp at age 19, on November 13, 1942, at the early height of World War II, where he felt strongly that he needed to get involved. He did his basic training at the U.S. Army Air Force Base at Chico, California and was assigned to the Airplane Engine Mechanic Division, along with serving with the 78th basic Flying Training Squadron.

ALLEN E. HOM, joined the U.S. Army at age 20, on August 23, 1944, during the fiercest fighting of World War II, training at Fort Douglas, Utah. Later he was promoted to the rank of Sergeant, where he served in the specialty area of Tabulating Machine Operation 400. His citations included American Theater of Operation Service; Good Conduct Medal; Meritorious Unit Award; Victory Medal.

WELLMAN D. HOM, at age 18 joined the U.S. Army on August 12, 1947, and had his training at Fort MacArthur at San Pedro, California. He served in the Army Occupation of Japan, where he was awarded a Citation for his diligent work in the department of mail. His work was to maintain an orderly system of mail distribution so that the departments and individual solders would receive the mail as quickly as possible.

HERBERT H. HOM, join the U.S. Army Infantry at age 21, on March 23, 1951 and took training at Camp Roberts in California. After training, he was made a Corporal and was shipped off to Korea, along with several hundred other trained men. This era is remembered for being the height of the war that was started in June 1950. He fought in several of the battles, including the most challenging which was the battle of Heartbreak Ridge. After he was in the battle for about a month, he was wounded. In his service he was given Citations and Medals that included the Korean SVA Medal W/4 Bronze Campaign Stars; United Nations SVC Medal; Purple Heart; Combat Infantry Badge.

ALBERT H. HOM, at age 27, joined the U.S. Army National Guard of California, serving from 1952 – 1958. He held the rank of Sergeant. The National Guard is part of the reserve components of the United States Armed Forces. It is a reserve military force, financed by the Federal Government. National Guard units can be mobilized for federal active duty to supplement regular armed forces during times of war or national emergency. They have constant training and serve in various areas. In San Diego, Albert Hom worked in providing food services and also served in the artillery division.

JOHN P. HOM, DDS, joined the U.S. Army at age 25 after graduating from Indiana University and its Dental School, on October 30, 1962. John’s rank was Captain and served in the Army Medical Services as a dentist at Fort Sam Houston, Texas. Later he was transferred to the 51st Field Hospital at Fort Lewis, Washington. Luckily, Dr. John got transferred, for here is where he met his future wife, a charming girl named Valerie.