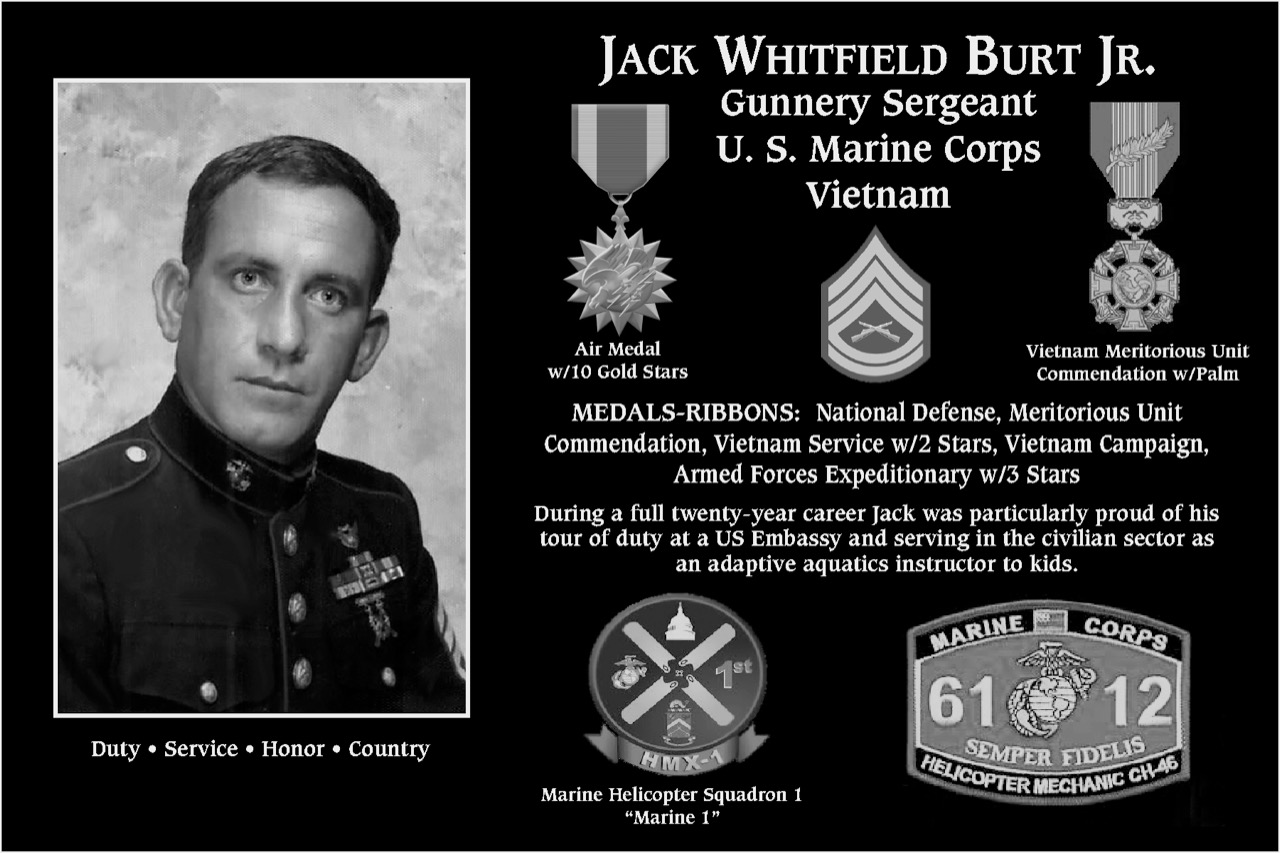 Jack was born February 24, 1942 in New Orleans, Louisiana. He had always wanted to be a Marine. So, one month before his eighteenth birthday, he asked his father to sign for him allowing him to join. He was proud to have double first cousins, who live in San Diego, attended his graduation from MCRD. It became a tradition for them to accompany Jack to his son’s, Keith and his grandson’s, Patrick’s, graduation from MCRD.

Jack met the love of his life, Margaret, on a blind date while on leave in Baton Rouge, LA on February 14th. She later flew to Washington D. C. to see him graduate from embassy school. After a year in Brazil and year in Santo Domingo, Jack flew Margaret down to Santo Domingo, during a revolution and protecting her received the only kill for the day, later ask her to marry him. She became his valentine every day of his life on May 28th, 1966.

Jack was a helicopter mechanic on the CH46, the CH53 and the Huey. He was station at New River, when his oldest son, Jack was born. He did a tour in Vietnam and was at NAS Dallas when both Keith and Terri were born. While he was at Warminster, PA, he was put in charge of the Marines’ Toys for Tots. During this time, he met and worked with a family that would become his closest lifetime friends, the Timbys. Jack finished his 20 year career HMX-1.

Jack returned to his hometown of Baton Rouge and worked for the State of Louisiana until 2005. He and Margaret then retired to their lake house on Toledo Bend, Texas. Jack fished everyday day for the next 11 years. When told he had cancer and that “maybe he had months to live.” His response was always, “No, I’ve got a party to go to”. Eighteen months later, he passed after celebrating his and Margaret’s 50th Wedding Anniversary, where he declared, “It’s never been boring”.

Jack is survived by the love of life- Margaret, three children, twelve grandchildren, and 6 great-grandchildren.