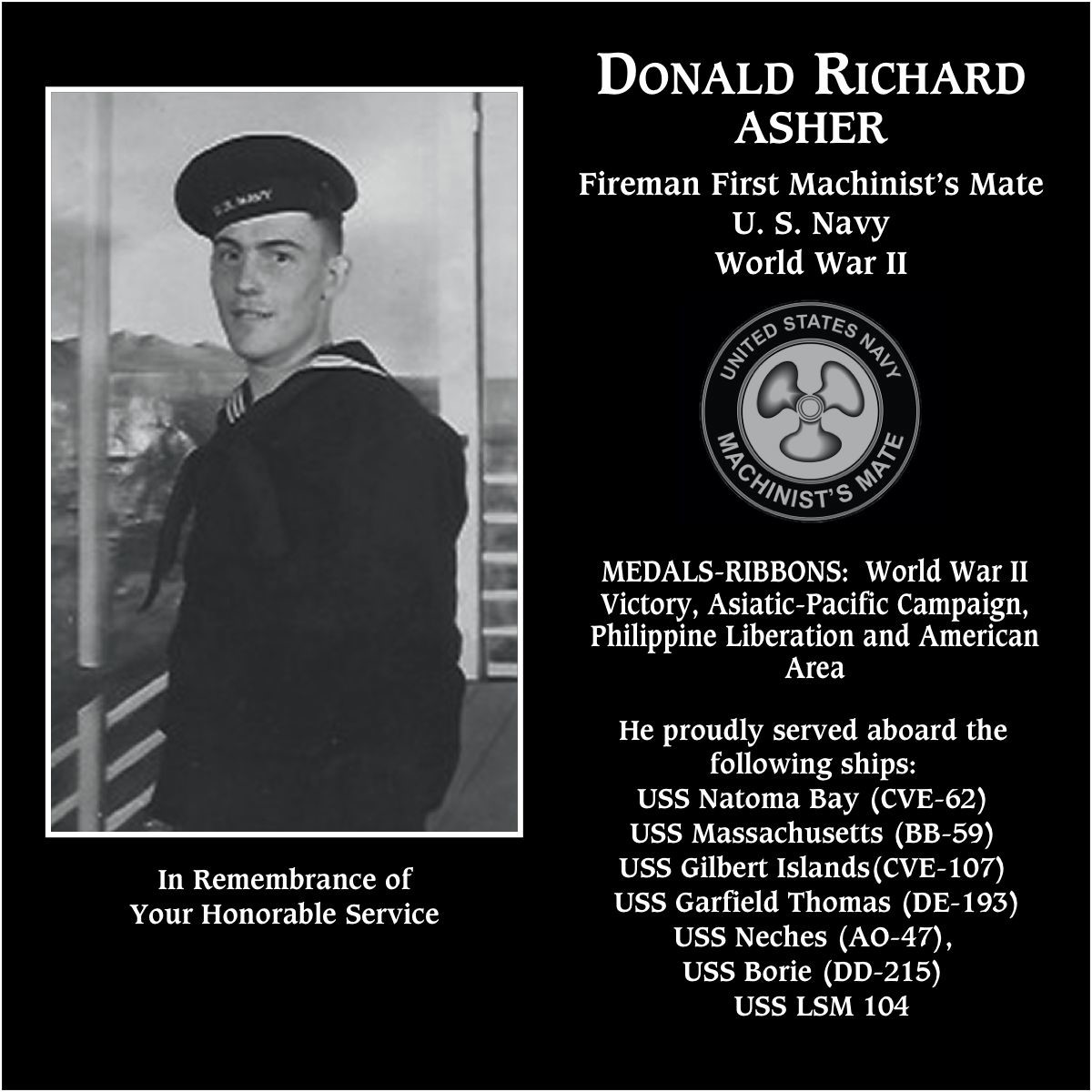 Donald was born on February 7, 1927 in Detroit, Michigan to Gordon and Viola Asher. Don grew up in Detroit, attending the school of hard knocks and leaving home in his teens to serve in the United States Navy where he earned his high school diploma. Donald's story about entry into the Navy was not unlike other young men during the era of World War II; he was a less than willing volunteer. Donald joked in his later years that he was strongly encouraged to join the Navy by a juvenile court judge who made military service sound preferable to another option. Entering the service as a teenager Don grew up on board ship; learning a trade and learning to box competitively. He was fiercely proud of his service in World War II and never tired of sharing colorful, entertaining stories of his time in the service. Shortly after his Navy discharge Don met and married his best friend and love of his life Betty (Harmon). They settled in Detroit where Don worked as an electrician for JL Hudson and welcomed four daughters before moving to the Thumb of Michigan in an effort to get his growing family out of the city. Don thrived in business ventures in Deckerville, Michigan and added a son and daughter to his family. As a young man Don was active in community life and as a member of St. John Lutheran Church, the American Legion, the Masonic Lodge and the Shriners. Don and Betty loved exploring new places and vacationing in Treasure Island, Florida; spending part of every winter there for over forty years. Retiring to Gaylord in 1980, Don enjoyed family, music, a good party, jokes, lake-life, working out at the gym, his friends and community involvement. Don was a life-long storyteller. He especially enjoyed stopping to chat with total strangers about his hand-carved commemorative military cane. When you met Don, you heard about the love of his life, his children and grandchildren or a good joke. If you can not share a story about Don, or repeat a story from him, then you probably did not know him well. Don died quietly in Treasure Island, Florida; unlike the way he lived. He was preceded in death by his parents, his wife Betty, his #1 daughter Lynn Laughlin and his sister Marian and brother Douglas. He was loved and will be missed and fondly remembered by his children, grandchildren and many nieces and nephews.