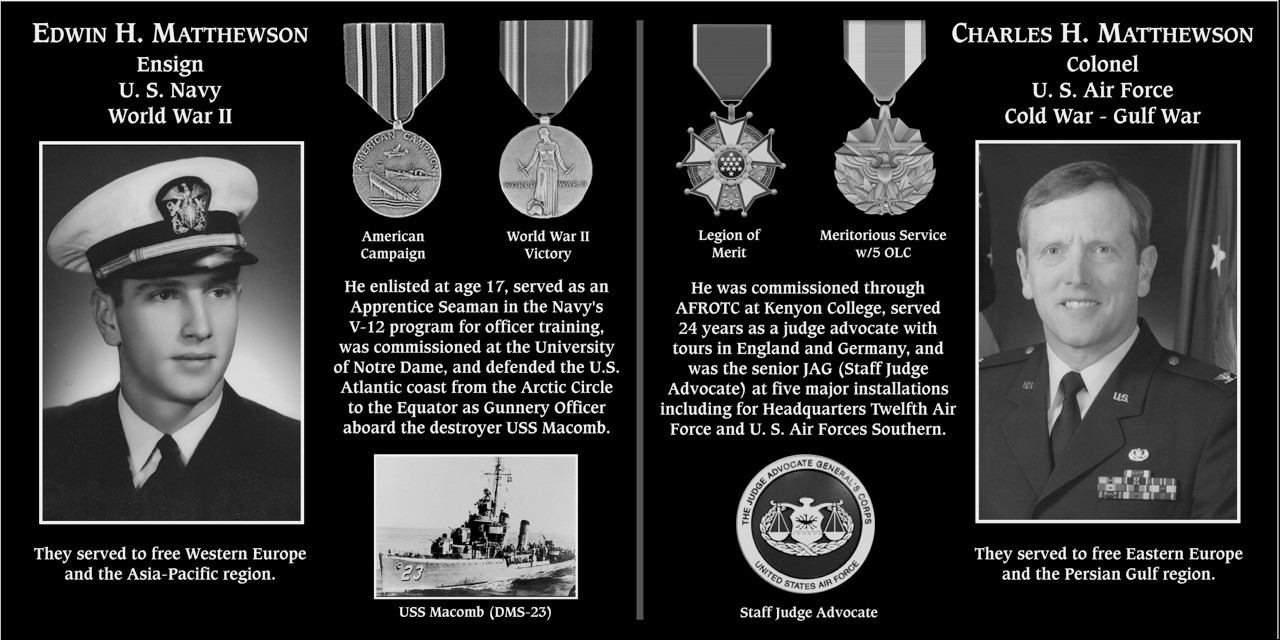 Ensign Matthewson was born August 14, 1926, in Sheboygan, Wisconsin. He graduated from Coopersville High School, Coopersville, Michigan, in 1943 at the age of 16, and received a Bachelor of Science Degree in Mechanical Engineering from the University of Notre Dame, South Bend, Indiana, in 1949.

He enlisted in the United States Navy, on his 17th birthday with parental consent, but also enrolled at Michigan State College, knowing he could log a full semester before he was called to active duty. In January 1944, he was placed into the Navy’s V-12 Officer Training Program as an Apprentice Seaman and received his initial training assignment at Western Michigan College. Later that year, he was transferred to the University of Notre Dame as his final officer training assignment. There, Ensign Matthewson was commissioned in June 1946.

Ensign Matthewson was then assigned to serve aboard the USS Macomb, a Gleaves-class Destroyer and Minesweeper, as part of the Atlantic Fleet based in Norfolk, Virginia. He was assigned as the ship’s Gunnery Officer, in which role he readily earned a full general-service deck duty rating. For the ensuing year, Ensign Matthewson and the rest of the Macomb crew engaged in patrols and exercises all along the Atlantic coasts of the United States and Canada, and extending from the Arctic Circle to the Equator, with service in the Caribbean Sea as well.

Ensign Matthewson was released from his active duty commitment in June 1947, and he returned to Notre Dame to finish his degree requirements, but he remained in the Inactive Naval Reserve until his honorable discharge in 1956. Ensign Matthewson’s military decorations and awards include the American Campaign Medal and the World War II Victory Medal.

Ensign Matthewson, like so many of the Greatest Generation’s war veterans, returned to civilian life to build post-war America and to help rebuild global economies.

He started a career in manufacturing in 1949 at Air Control Products in his hometown of Coopersville, Michigan. Ensign Matthewson began on the plant production line as a riveter, and in seven years worked his way up to be assistant to the president. After two-year senior-management terms at both Evans Products in Grand Rapids making automotive parts and the Kaydon Corporation in Muskegon making bearings, Ensign Matthewson became Vice President and General Manager of Technology Incorporated in Grand Haven in 1960. He helped lead this manufacturer of automobile components until 1975 when he became the president of the Hi-Lex Corporation in Battle Creek.

Hi-Lex was a Japanese-owned company trying to build a strong base in support of Detroit’s automotive industry making control cables. During the 1980s, Ensign Matthewson was part of Michigan Governor James Blanchard’s trade mission to Japan, when America and Japan worked to embrace each other as global manufacturing partners, just four decades after the war. Ensign Matthewson’s leadership efforts developing Hi-Lex for the parent Nippon Cable Systems are chronicled in the book “Small Town: Giant Corporation” by James Hettinger. In 1988 Ensign Matthewson was hired as the president of Pullman Industries in South Haven. He later described this producer of automotive components as the greatest love of his career in light of the historic growth Pullman experienced with him at the helm, as they expanded into Indiana and Canada with new plants. Ensign Matthewson retired from the manufacturing industry in 2002, culminating over 50 years of dedicated service and leadership in manufacturing excellence and global business development.

Throughout his career and into retirement, Ensign Matthewson found time to enjoy hunting, especially birds, with his friends and associates, as well as his constant-companion Weimaraners. He is a member of American Legion Post 12 in North Carolina, and he is a life member of the Lisbon-Crescent Masonic Lodge 229 in Michigan.