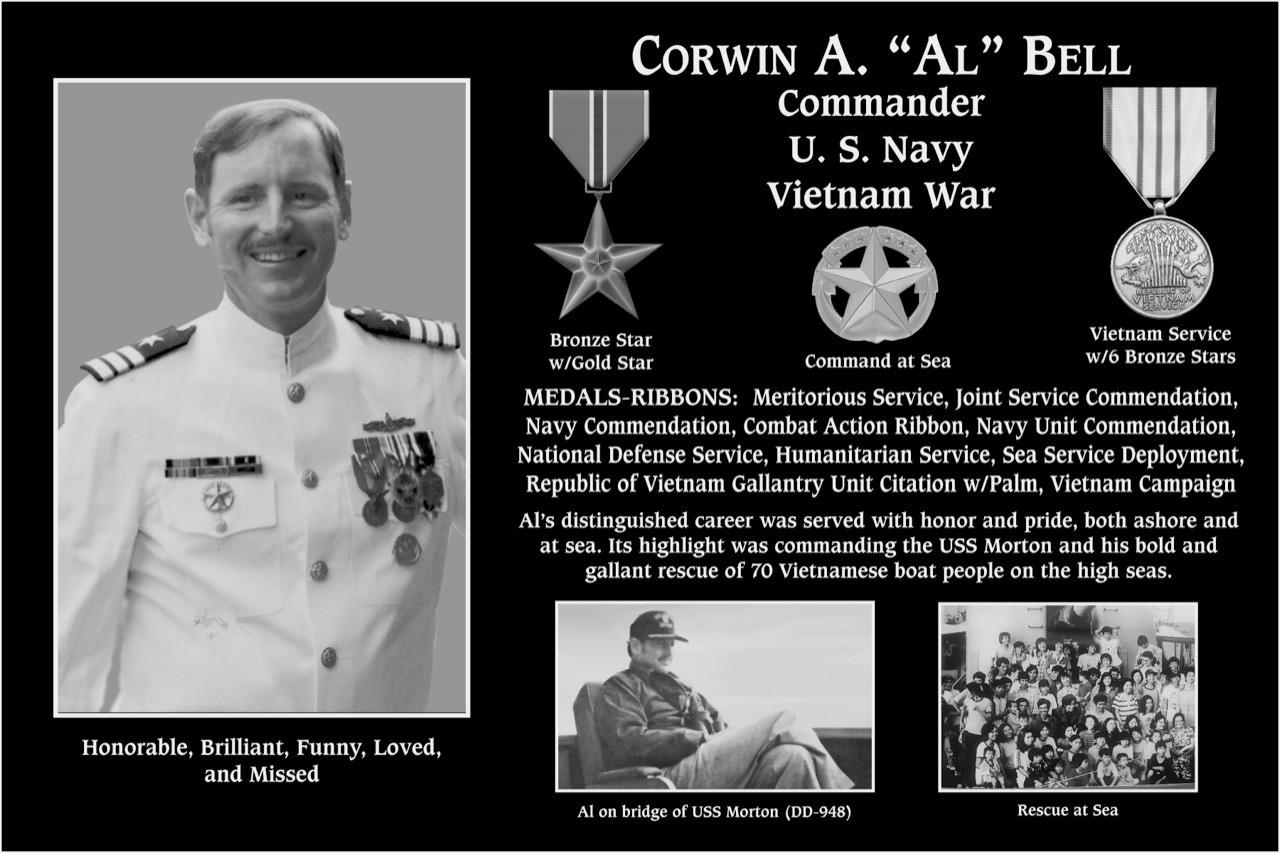 Born July 15, 1941, died August 22, 2017, retired Commander Corwin A. (Al) Bell was born in Birmingham, Alabama. Growing up, he lived all over the South while his dad was a pilot, first in the Army Air Corps in WWII and, later, the Air Force during the Korean War. Al received a Bachelor of Science degree from Duke University and, later, a Master of Science Degree from the University of Southern California.

He served in the Navy for 24 years, participating in the Vietnam War from beginning to end on a variety of ships and riverboats. He was on the USS Constellation (CVA-64) when the first air strikes were launched on North Vietnam. He had two years on an LST that carried troops and cargo along the coast of South Vietnam and up its rivers. He served as Senior Advisor to River Assault and Interdiction Division 72 in heavy combat in the Mekong Delta. He was Weapons Officer on a guided missile cruiser just off the coast of North Vietnam when the peace treaty finally ending the war was signed.

Al was the last commanding officer of USS Morton (DD-948) at Pearl Harbor and retired from the Navy while serving as Executive Officer of Naval Station Pearl Harbor. He was awarded two Bronze Star Medals for heroism with the “V” for Valor device. He was also awarded the Meritorious Service Medal, the Joint Service Commendation Medal, the Navy Commendation Medal, the Humanitarian Service Medal, among other medals and ribbons.

In June 1982 while the Morton was on a 6-month deployment, the ship encountered 70 Vietnamese “Boat People” on two separate overcrowded fishing boats trying to escape Vietnam. These people were rescued and resettled in places all over the world. Just over 15 years ago, some of the survivors contacted Al and have kept in touch with him ever since. Reconnecting with them was a highlight of his life.

Al had a varied civilian career, mainly in the field of government contracting, which ended when he retired for good while he was a program manager for a defense contractor.

He is survived by his wife, Marla, his daughter, Lisa, his son, Alex and his grandson, John.